I've become a big fan of the Still It channel on YouTube.  About a month ago, Jesse posted a video about how he made rice wine using nothing more than water, rice, and a purported "magic" yeast from China called Yellow Label Angel Yeast.

Perhaps even more amazing was the fact that he was able to make the rice wine without gelatinizing or mashing the rice.  He shows three batches in the video.  One was made by cooking the rice before adding the yeast mixture. Another was made by adding uncooked rice to boiling water.  The last was made by adding uncooked rice to room temperature water.  All three fermented out to roughly the same amount of alcohol in about two weeks. He was amazed by this, as was I. I resolved to buy some of this magical yeast from Aliexpress.com and try it out. 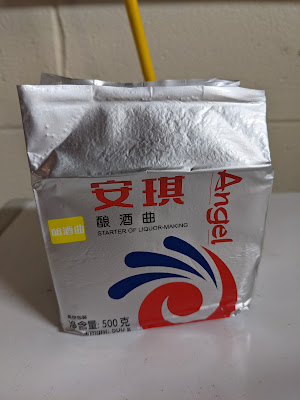 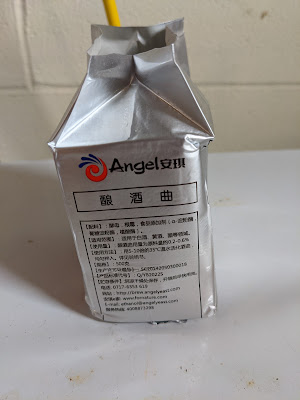 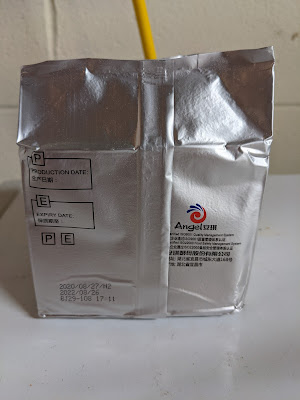 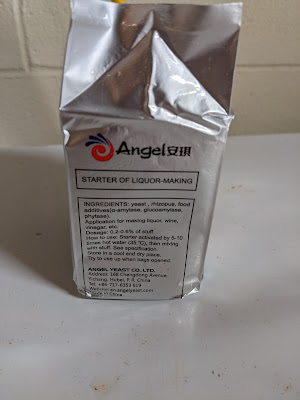 In the Still It video, the rice is ground up in the grain mill into smaller chunks to make it easier for the enzymes in the yellow label yeast to convert and ferment.  I'm changing this up slightly, switching a blender for the grain mill.  I think that will break the rice down better and hopefully will yield a better overall result.  Apart from that, I'm following the Still It recipe as shown on-screen in the video.The yeast arrived early in January.  Last week, on one of my rare trips out of the house (thanks to COVID-19), I picked up two 10-pound bags of rice to play with.

Fermentation Plan:
After fermentation is complete, I plan to taste a sample of the rice wine to decide what I might want to do from there.  For example, I might want to add a flavoring or age it with some wood to enhance the flavor.
Post-Brew Notes and Observations
01/13/2021:  Because the kitchen stove heats water considerably faster than either my Grainfather or my induction cooktop (which both run on 120V outlets), I decided to do the boil and soak on the kitchen stove instead of in The Grainfather or elsewhere.  This turned out to be a good move because the water was boiling in just a few minutes.  I added the rice, stirred, and turned off the heat.  About two hours later, the rice had absorbed all the water and was nearly fully cooked. I ran some through the blender but got tired of that and put it all in the fermenter with cold water.  The temperature was well over 100F even with cold water added, so I had to wait for it to get down to a yeast-safe 86F before pitching.  This was no problem, since the yeast needed time to rehydrate anyway. 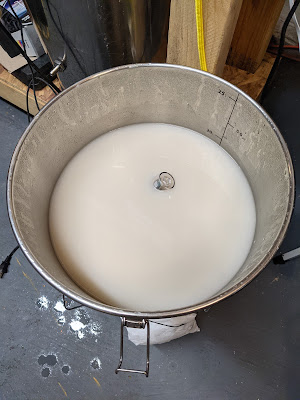 If I had this to do again, I would follow Jesse's lead and put the rice in the fermenter first, then add the boiling water.  I might run the dry rice through the blender to break it down a bit, since I think it would do a better job than the grain mill, but that's something I'll consider next time.
I dropped a Tilt Hydrometer in the fermenter, though I suspected the readings might be useless.  Why?  In a traditional all-grain mash, enzymes in the malted grain convert the starches in the grain into sugars.  Then we separate the grain from the liquid and allow yeast to consume the sugars converted by the enzymes.  In this case, we are not mashing the grain and not converting any of the starches into sugars.  Instead, components in the yeast mix begin breaking down the starches gradually.  As sugars become available, the yeast begins eating them.  It might not be a one-to-one balance between the conversion and fermentation, but because this is a two-part activity and not a straightforward fermentation, the Tilt (which measures gravity or sugar content) won't necessarily report what's really going on.  However, I expect that it will show changes taking place in the fermenter - so it might be interesting though not necessarily useful.
Initially, before I added the yeast and stirred it in, the Tilt registered a gravity of 1.011 SG.  A few hours after the yeast mix went in, it had increased to 1.022 SG, suggesting to me that the enzymes were doing their job and converting sugars which would at some point start feeding the yeast.  I might see gravity move up and down over time as conversion and fermentation continued.  We'll find out.
01/14/2021:  The gravity read as high as 1.025 SG during the night, but has since dropped down to 1.021 SG.  There seemed to be a good amount of activity in the airlock last night before I went to bed, so it appears the yeast mix is doing well in its new rice wine home.  The temp has dropped a bit overnight, which I need to fix before it gets too low.  (As it turned out, when I went down to stir it, I learned that I had not plugged in the heater.  I also learned that it had liquified quite a bit of the rice, making it much easier to stir than it was last night, with no large chunks of rice in it anymore that I could find.)  Gravity read on the Tilt as 1.031 SG after stirring.
01/15/2021:  After the morning stir, the gravity read 1.013 SG.  About 12 hours later, it had dropped to 1.000 SG.  The nasty sulfur smell has pretty much disappeared at this point, and the smell is basically neutral at this point.
01/16/2021:  Gravity has dropped to 0.994 SG overnight, suggesting that there is enough alcohol in the fermenter to make the resulting liquid lighter than the starting water.  When I checked around midnight, the airlock was still bubbling very actively, like a beer fermentation at the height of fermentation activity.  When I stirred it, a lot of CO2 bubbles came out, and quite a few individual rice kernels swirled around in the liquid but no clumps.  The liquid itself felt thin and easy to stir, unlike earlier in the process when it was much more porridge-like and harder to stir.
01/18/2021:  Fermentation seems to have stopped.  No airlock activity and no visible indication of fermentation.  Gravity has been at 0.993 SG for a while.  I used a strainer to remove the remaining rice from the liquid, and applied Super Kleer finings to clarify the wine a bit.
01/20/2021:  The wine is a little clearer, though you would not call it crystal clear by any stretch of the imagination.  I extracted a sample to taste.  The flavor was mildly tart and reminded me of a watered-down white wine.  It's very easy to drink.  I've no idea what the ABV is, but I could smell a definite alcohol note when racking the wine off the yeast and rice leftovers, so it's probably higher than it seems.
01/22/2021: Best guess, after doing some analysis, is that the finished wine was around 7% ABV.  Next time around, I'll use more rice and let it ferment longer to be sure it finishes.