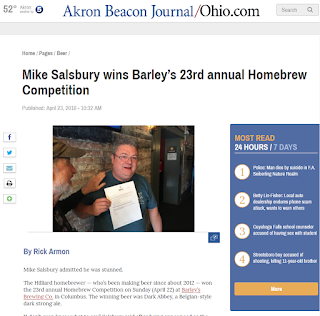 I'm the shocked-looking fellow in the image at the left, who had just learned that he'd won the Barley's 23rd Annual Home Brewing competition.

I'm in my early 50's, and work for a large non-profit organization in Central Ohio as an engineer in the IT division. That job feeds my brewing addiction...

I started home brewing in approximately 2012. I didn't keep good records in the early days, so I can't tell you for sure when I started.

I began with the Mr. Beer kit that many home brewers start with. From there, I graduated to an 8-gallon Mega Pot 1.2 kettle and 5-gallon batches on the kitchen stove. In 2014, I supported the Kickstarter for the iMake Grainfather RIMS brewing system. I used The Grainfather from late 2014 until very late in 2017. At that time, I was offered a deal on PicoBrew's Zymatic brewing system - and I took it. In late 2018, I was offered an even better deal on the Brewie+ automated system, and I took that, too. Before the Brewie+ died, I put a few of the batches into competition and even got a medal for one of them at the Ohio State Fair.  Since the Brewie's demise, I have been back to using The Grainfather - but I've modified it a bit to make it more fun to use.

I didn't start competing with my home brew until 2017. My first time out, I placed 5 different beers into 2 different competitions. Two of those beers earned silver medals at the Ohio State Fair. A different one took third place (overall) at Barley's Ale House's 22nd Annual Homebrew Competition.

In 2018, I entered three competitions. At the Rhinegeist competition, I entered two beers which failed to place in the categories. At the 2018 Ohio State Fair, my Belgian Tripel took a fourth place ribbon. As the image above shows, I actually won the 2018 Barley's competition with a Belgian Dark Strong Ale.  In 2019, my Dry Irish Stout took third place in the stout category at the Ohio State Fair.  So far in 2020, COVID-19 has pretty much killed any homebrew competitions here in Ohio, so I've been focusing on learning and on re-brewing some favorite recipes from years past.

If you scan this blog, you'll see that Belgian-style beers are my clear favorite. I've made lots of Belgian Single, Dubbel, Tripel, and Dark Strong Ales. The styles you won't see many of are those with a decidedly hop-forward nature like India Pale Ales (IPAs) and American Pale Ales. Those are styles I typically don't seek out to drink, so I don't tend to brew them either. By my best estimates as of this writing, I've brewed probably 15 of the 34 major listed BJCP styles, and about 35 of the "subcategories" listed under those 34 styles.  You can see the full list of batches I've brewed here.

My current setup consists of the following (links go to manufacturer and product pages):

In late 2018, I joined the SODZ (Scioto Olentangy Darby Zymurgists) club. I've been to a few meetings but haven't attended very regularly.

Recently, I've been trying to "dial in" settings in BeerSmith and Beer Tools Pro so that I can do a better job getting my actual brewing results to match up to the figures in the software. Below are some of the figures I've worked out with my US Grainfather. Given manufacturing variances and possible measuring errors on my part, these might not match exactly to yours, but hopefully they're close enough that it will help you. BeerSmith Equipment Profile: Brewhouse Efficiency: 83% (based on my experience, yours may vary) Mash Tun Volume: 8 gallons Mash Tun Weight: 8.82 pounds Mash Tun Specific Heat: 0.12 Cal/gram-deg C Mash Tun Addition: 0 gallons Lauter Tun Losses: 0 gallons Top Up Water for Kettle: 0 gallons Boil Volume: 6.25 gallons Boil Time: 60 minutes Boil Off: 0.40 gallons per hour Cooling Shrinkage: 6% Loss to Trub and Chiller: 0.53 gallons Batch Volume: 5 gallons Fermenter Loss: 0.40 gallons (yours may vary) Whirlpool time: 0 minutes B
1 comment
Read more

I currently have my second batch of rice wine fermenting with the "magical" yellow-label Angel Yeast from China, and wanted to share some of the more unusual aspects of using it.  If you've never seen or used this yeast, I suspect you're not alone.  It ships in a 500 gram package that looks like this: What makes it "yellow label" is that yellow box you see in the upper left corner of the package.  This implies that it's yeast for distilling (though you do not need to have a still or distill the output to use it).  As I understand it, inside the package is a mix of yeast and other materials which will convert starch into sugar and directly ferment it, without the need for a traditional mash step.  This can radically shorten your brewing time.  For my most-recent batch of rice wine, I heated 3 gallons of water to 155F, poured it over 13+ pounds of uncooked rice straight out of the bag, let that soak for an hour, rehydrated some of this yeast in warm water,
Post a Comment
Read more

In the last post, I shared an overview of The Grainfather, recommended equipment to use with it, and an overview of the brewing process.  In this installment, I'm going to talk specifically about mashing and sparging. Having brewed over a dozen batches with it, I'm finally becoming very comfortable with the device, the mash process, and how to get what I want out of it. I don't consider myself a "master" of it yet, though. For those who have never done all-grain brewing, I want to provide a quick overview of the mash process itself. Mashing - With or Without The Grainfather The goal of mashing is to turn the starches in the grain into sugars. More specifically, you want to turn the starches into a mix of fermentable and unfermentable sugars that provide the flavor profile associated with the beer you are brewing. A sweeter beer might warrant more unfermentable sugars. A more dry beer will demand few unfermentable sugars. To a great extent, controlling the
2 comments
Read more