I currently have my second batch of rice wine fermenting with the "magical" yellow-label Angel Yeast from China, and wanted to share some of the more unusual aspects of using it.  If you've never seen or used this yeast, I suspect you're not alone.  It ships in a 500 gram package that looks like this: 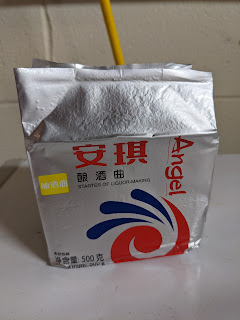 What makes it "yellow label" is that yellow box you see in the upper left corner of the package.  This implies that it's yeast for distilling (though you do not need to have a still or distill the output to use it).

As I understand it, inside the package is a mix of yeast and other materials which will convert starch into sugar and directly ferment it, without the need for a traditional mash step.  This can radically shorten your brewing time.  For my most-recent batch of rice wine, I heated 3 gallons of water to 155F, poured it over 13+ pounds of uncooked rice straight out of the bag, let that soak for an hour, rehydrated some of this yeast in warm water, added cold to the fermenter containing the rice mix to get the temp down to 90F, then pitched in the rehydrated yeast and stirred.  Within hours there was airlock activity.  The total time investment on my part had to be well under two hours to get that going.  Compare that with any all-grain homebrew activity.  Even with a shortened mash and boil, you would be hard pressed to keep the time under two hours.

One thing that's kind of odd about using Angel Yeast is that it can be hard to determine the equivalent of starting gravity and the alcohol by volume.  That's because when you initially pitch the Angel Yeast, the gravity will show as approximately the same as water because none of the starch has converted.  It will stay fairly close to water throughout the conversion and fermentation process.  The current batch I'm fermenting started with about 13.4 pounds of uncooked rice in a total volume (water and rice) of 5.5 gallons.  Using Brewfather and substituting flaked rice for uncooked rice (which is not likely to be a 1:1 substitution), I get an original gravity around 1.071 SG.  My best guess is that it should end up around 10% ABV, but this all depends on how well the yeast mix converts the rice.

I wondered what I would see if a Tilt Hydrometer measured the gravity of a batch brewing with Angel Yeast.  The answer is that you can see that there is "activity" going on in the fermenter (in the form of changing gravity of the liquid) but it doesn't directly correlate into a traditional fermentation process.

For example, here's a graph of fermentation for a beer wort fermented with traditional ale yeast: 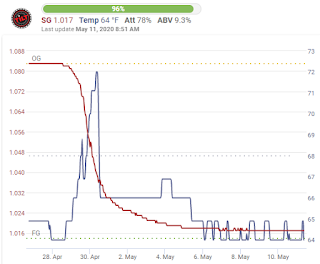 The red line in the graph depicts the gravity of the wort as measured by the Tilt Hydrometer.  We see virtually no change in gravity for a while as the yeast acclimates to its new home and gets ready to reproduce.  Then there's a sharp drop-off as the yeast starts fermenting very actively and consuming lots of the sugar in the wort.  Finally, the curve levels off as the yeast finishes up the last of the sugar it can eat and begins going dormant.

A graph of fermentation of a rice "mash" with the yellow-label Angel Yeast shows a totally different behavior profile: 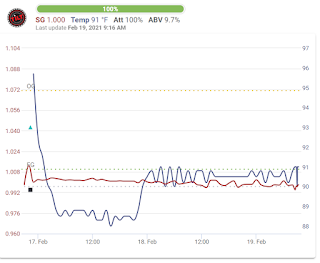 There's a slight increase in gravity at the start as the starches are broken down into sugars and the Tilt sees the increase in gravity.  Soon, however, the yeast gets to work on these sugars and gravity begins to approach 1.000 SG.  Gravity tends to stay in the 0.994 SG to 1.003 SG range as simultaneous conversion and fermentation take place in an approximately-balanced process.

This gradual decrease in gravity is consistent across batches.  For example, here's the graph from another recent batch fermented with Angel Yeast.  Note a very slight gradual decline in gravity over time: 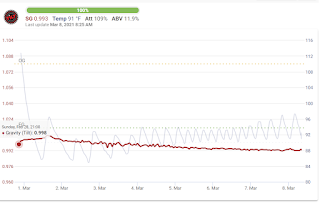 During the first 2-3 days of fermentation, you have to keep stirring the contents of the fermenter to help de-gas the liquid, keep everything in suspension, and (I suspect) aerate it a little.  You'll notice when you do this that the aroma coming off the fermentation is pretty unpleasant, something like like rotten eggs or old socks.  This will gradually subside and won't be there in the finished product (in my experience, anyway).  You'll also notice a lot of carbonation being released by the stirring, resembling a soft drink or champagne initially and gradually dropping off.

Knowing that you want to get as much out of your grain (rice) as possible, a challenge is knowing when the Angel Yeast is finished doing its job.  Having an airlock on your fermenter will help with this, though that's only somewhat reliable.  I saw no airlock activity at all for the first 24 hours or so, despite it being obvious when I stirred the fermenter contents that CO2 was coming out in quantity.  It was only on days 2-3 that I saw very clear, very active airlock activity.  You're probably better off relying on a combination of airlock observation and time to determine when fermentation is finished.  I'd recommend that even if you think conversion and fermentation are finished on day 4-7, you let it run through to day 14 before considering it finished.  Even if you are right, the extra time will allow the solids to settle out and any remaining unpleasant aromas to work their way out as well.

I've yet to try this on barley or any other grain, but I do plan to do so in the future just to see what the finished product tastes like.  To be honest, I am doubting it will be anything like a real beer, but I am curious to know whether it's pleasant and/or drinkable.

Update 04/21/2021:  This yeast looks like it does have an ABV limit.  Monitoring with the Tilt Hydrometer, I've seen that any time I use 15 pounds of rice in a 5-gallon batch, gravity will slowly drop to a certain level, then gradually start increasing over time.  For example, a batch I started about two weeks ago got down to a gravity reading of around 1.006 and then started climbing.  It's currently reading 1.030 SG and shows signs of increasing further.  I tried compensating by adding champagne yeast to the fermenter but this seems to have made no difference.