April 05, 2015
During the creation of a wort, a group of proteins is formed that will show up when the beer is chilled to drinking temperatures.  This "chill haze" does not affect the flavor of the beer, but does make the beer appear cloudy or hazy.  For darker beer styles like a porter or stout, the haze might not be visible.  For lighter styles like pilsners, this haze might be undesirable.  Fortunately, it's easy to remove chill haze from a beer.

During the boil of your wort, it's important to boil vigorously.  This will help to coagulate many of the proteins that form chill haze.  This is what is known as the Hot Break.  When you're finished boiling the wort, gently stirring it in a "whirlpool" fashion with a sanitized spoon will cause the coagulated proteins and other particles of trub to collect in the middle of the kettle.  If you carefully remove the wort from the kettle, you can leave these undesirable proteins behind, resulting in a clearer beer.

At the end of the boil, it is necessary to quickly cool the wort to yeast-pitching temperatures in order to begin fermentation.  While you could seal your beer in an airtight, sanitized vessel and leave it alone until it reaches those temperatures, you are taking a big risk.  While the beer is spending hours cooling down, the proteins we're talking about will remain in the wort and a number of unpleasant and undesirable sulphur compounds will be produced.  These compounds include dimethyl sulfide (DMS) which gives the beer off-flavors and an aroma similar to cooked or creamed corn.

To avoid chill haze and undesirable sulphur compounds, it's important to chill your beer from boiling temperatures to yeast-pitching temperatures as quickly as you can.  This causes what is known as the "Cold Break" which helps those chill haze proteins fall out of the wort so they don't end up in the finished beer.  A Cold Break will also prevent the formation of those unpleasant sulphur compounds like DMS that will damage the flavor of your beer.

For small batches of 1-2 gallons, you can achieve Cold Break by submerging your brew kettle or a similar-sized sanitized vessel into an ice water bath.  The ice water will quickly chill the wort and give you the Cold Break you need.

For larger batches, an ice bath might be impractical.  In these cases, the use of a "wort chiller" is a better option. (It's a good option in the small batches as well.)  There are three different kinds of wort chillers available to home brewers: 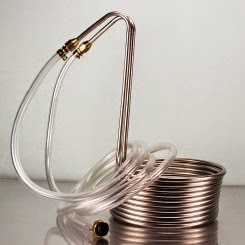 Personally, I prefer the immersion style chillers over the counterflow chillers.  My reason for the preference is the ease with which an immersion chiller can be cleaned.  When you finish using your immersion chiller, you drain the cold water out of the inside, then clean the outside with a brewer's wash or sanitizer.  Then it's ready to use.  This takes about as long as cleaning a typical soup pot after heating a batch of Campbell's Chicken Noodle.

Counterflow chillers require a more involved cleaning process.  After you use them, you need to mix up a cleaning solution that doesn't harm your pump or lines.  You then pump this cleaning solution through the pump, the hoses, and the counterflow chiller.  If you don't do this, particulate matter from your current wort will remain in the chiller.  This matter could contaminate your next batch of wort, causing off flavors or bacterial infection.  Since you can't really see inside a counterflow chiller, you can't really be "sure" that you've cleaned it completely.  By comparison, you can see the outside of an immersion chiller and any (obvious) particulate matter.  You'll be able to easily scrub that off.  And when you make your next batch, the chiller goes into the boiling wort where any bacteria or wild yeast is killed off.

But this is largely a personal preference and a "what you can afford" thing.  If you've got the money and time to use and clean a counterflow chiller, it's the better option.  If you don't, an immersion chiller will do the job almost as well and costs a lot less.  (Immersion chillers are commonly priced in the range of $50-75, while counterflow chillers are typically around $200.)

If you're aiming for a very clear and bright beer, you can improve a bit on the results from a good wort chiller by adding substances to your beer that don't affect the flavor but do remove the proteins that can cloud it.  These are called "finings" and are available at most homebrew supply stores.

Finings are usually added to the wort near the end of the boil.  They cause the undesirable proteins in the wort to coagulate and fall out of suspension.  When combined with a good Cold Break, finings can go a long way toward making your home brew look at clear as a commercial craft beer.

There are several kinds of finings available to home brewers.  These include:


Finings are relatively inexpensive and easy to use, having no impact on the beer's flavor while making it much clearer and brighter.  Some homebrewers eschew the use of finings because they remove proteins and yeast, and thus some of the nutrients, from the beer.  There is no requirement that you use finings in your brewing activity, so feel free to use or omit them as you wish.

Finings are relatively inexpensive, costing only a few dollars for enough to clarify several batches of beer.  Combined with some of the other tools and techniques described here, they may get your beer close to commercial levels of clarity.

In lager brewing, chilling beer to temperatures in the 30-32 degrees Fahrenheit range for a period of four to six weeks will make a much clearer beer without the need for finings.

Ales can be cold conditioned as well.  This is typically done for a period of a week or so in refrigerator-style temperatures.

There seems to be some debate on this, but some brewers claim that if you remove the beer from the trub in the primary fermenter and move it to a secondary fermenter you will have a clearer finished beer because you leave all that potentially-clouding material behind.

More recently, I've seen experiments that indicate the opposite, that trub actually helps to clarify the beer and improve its flavor.

So as far as I'm concerned, the jury's still out on this.  Personally, I don't use a secondary fermenter and I've never felt my beers were unnecessarily cloudy.  (Then again, I tend to brew a lot of darker styles where haze might be harder to spot.)  You'll have to do your own experiments here and come to your own conclusions.

Another way you can create a clearer beer is to choose a different yeast strain for fermentation.  The term "flocculation" is used to describe how well the yeast moves out of suspension when it's finished fermenting.  A yeast with low flocculation will leave a beer cloudy.  You see this in German wheat beers and Belgian wit beers.  A yeast with high flocculation will drop out of the beer when it's finished doing its job, leaving a clearer beer behind.

For some beer styles you may need or want a low-flocculation yeast in order to achieve the right flavor and cloudy appearance.  For others, if you want a clearer beer, choose a yeast that flocculates highly and you'll automatically have a clearer finished product.

The big commercial breweries, the kinds that have big television ad campaigns and plaster their logos all over sporting events, often take the additional step of filtering their beer before bottling.  Filters can remove yeast, protein, and sediment from the finished beer.  How much is removed depends on the size of the openings in the filter media.  Below is an example of a home brewing filter system called Beer Brite, which looks like a modified version of a household tap water filter: 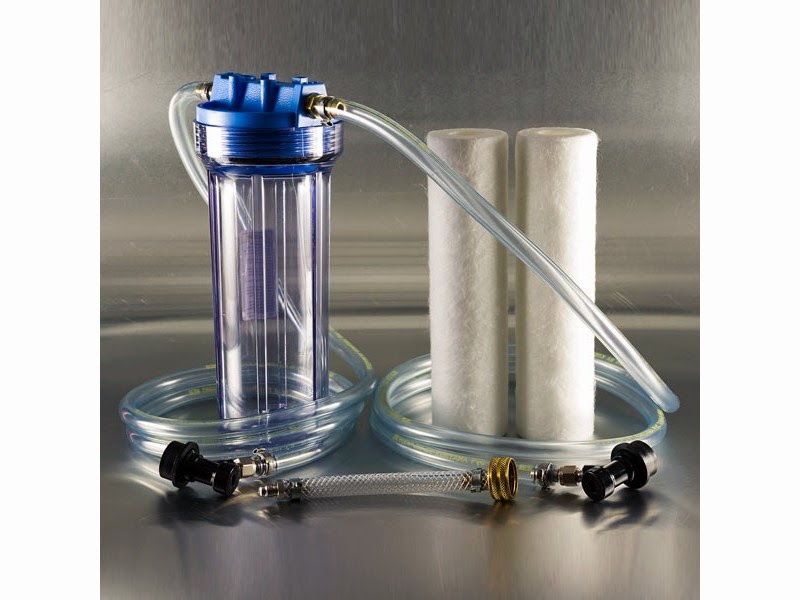 The manufacturer of this product claims that it will "wow your friends and family with the absolute commercial quality of your homebrew" and will "filter out suspended yeast and particulates for startlingly bright beer".  This filter sells for approximately $80 at the time of this writing.

The down-side to filtering is that by removing most of the yeast from your beer, you remove (or at least complicate) the option of natural carbonation in the bottle.  Using a filter system like this, you'll most likely need to keg the beer and inject carbon dioxide into it.

There are many ways to achieve a clearer finished beer, as we've discussed.  Most of these are relatively inexpensive and can deliver good results.