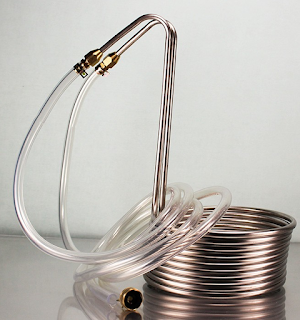 This past Christmas I received the Silver Serpent stainless steel immersion wort chiller.  I've had the opportunity to use it a few times now, so it seemed appropriate to share a review with readers of Begin Brewing.

The chiller arrives in a cardboard box, ready to use.  Hoses and fittings are already attached.  A quick pressure check on brew day showed no leakage.  (The photo at left is from their Midwest Supplies web site, where mine was purchased.)

There are twist ties on the coils that I removed, not certain if they were food safe or temperature safe. There are no instructions in the box with the chiller to tell you whether to remove them or not.

I'm currently doing all my brewing in our home kitchen.  Our stove is fortunately powerful enough to bring a 5-gallon batch of beer to a rolling boil, so it's worked well.  The unfortunate problem is that the faucet on our kitchen sink is designed without an aerator, so there's no way to attach a garden hose fitting adapter to it.

My solution to the problem was to visit a local aquarium store and purchase a submersible aquarium pump for about $30.  Then, I tangle the "hose fitting end" into the drain, attach the other end of the tube to the outlet on the aquarium pump, fill the sink with cold water, and start the pump.  The pump pushes cold water from my sink into the chiller and out the other side.  This is the opposite direction from the design, but shouldn't have a negative effect on heat transfer as far as I know.

When I used the Silver Serpent in the winter on a 4 gallon boil I made in January, when our tap water was about 53 degrees Fahrenheit coming out of the tap, the wort chilled to yeast pitching temperature in around 25-30 minutes.

A few weeks ago, I brewed a batch of Belgian Tripel using the Brewer's Best extract based kit (which I'll talk about in a future post).  This 5-gallon high-gravity beer took almost 75 minutes to chill to yeast pitching temperature using the tap water (measured at 59.3 degrees Fahrenheit) and aquarium pump. That was longer than I expected, but still much faster than I was ever able to chill my wort before. 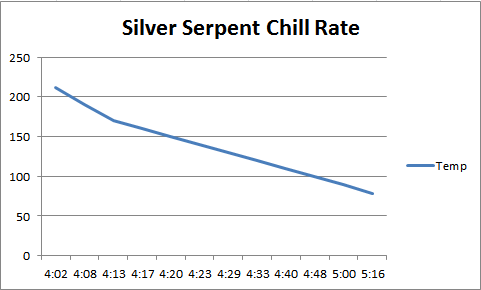 As you can see above, the temperature dropped about 10 degrees every 5 or 6 minutes.  With colder water on the incoming side, you'd probably see a faster decline in temperature.

Being made of stainless steel, the Silver Serpent is a little more expensive than some of its copper competitors.  I've heard that you may see corrosion and other issues with the copper chillers, so I thought the stainless made a nice alternative.  It looks as good now as when I got it six months ago.