July 26, 2015
Being a big fan of Belgian and Belgian-style ales, there are several types of beer I'd like to dial in a good recipe and process to brew.  Those include:

When I found a Belgian Dubbel recipe recently that sounded really good, I realized that I probably had all the ingredients I needed except for yeast, and that was actually on order from Midwest Supplies.  A few days later, the yeast arrived along with a 5-gallon economy kettle I wanted for brewing 2.5 gallon batches.  As it turned out, I didn't have the Special B grain, so I made a trip to Gentile's Wine Sellers (a local homebrew shop here in Columbus) and picked up a pound plus a vial of White Labs WLP530 Belgian yeast (rather than the dry yeast I'd planned to use).

Here's the ingredient list I used:
The brewing process went as follows:
The beer fermented from June 13 to June 25.  At that point, the gravity seemed to level off, so I used D-45 Candi Syrup to prime it for bottle conditioning.  That was on July 3.  It's now July 20 as I write this, and the beer is definitely finished. 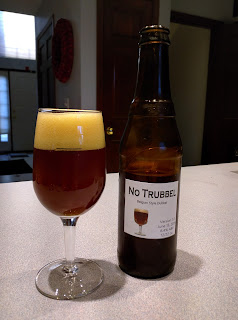 I can't speak for other homebrewers out there, but I've often been frustrated when I find beer recipes (like this one) online.  The brewer will give us painstaking details on how they brewed the beer, but not tell us how the beer turned out.  So we have this recipe in front of us that might produce the greatest beer ever, or something mediocre, or something awful.  We just don't know.   So my plan for the Begin Brewing blog is to come back and edit articles like this to tell you how the recipe turned out, what was good and bad about it, and what I'd do next time differently (if anything).

This particular beer turned out the perfect color and clarity, to my eye, for a Belgian Dubbel.  (See the photo at the left.)  It's a nice reddish mahogany color with a bit better than finger-thick head that's tan in color.  The head lasts for several seconds (maybe 15 or so) before reincorporating into the beer.

The aroma is yeasty, like most homebrew beers that are bottle conditioned.  There is a hint of caramel in the aroma and a touch of dark fruit like prune.  There is a little bit of a perfume note to it.

The flavor turned out malty, but with what I think is a perfect hops balance for a Dubbel.  You'll definitely know there's hops in it, but this isn't a hoppy brew by any stretch.  There is a hint of the Belgian dark fruit (prune or similar) in it, but it's not as pronounced as it could be.  There isn't a lot else to the flavor.  If I'd been handed this (and didn't know what it was), then asked to review it on a 1 to 10 scale (where 10 is fantastic), I'd probably give it a 7.  It's good, but it could definitely be better.


What Would You Do Differently Next Time?

The Sugar:  I used Brun Fonce candi sugar in this beer.  While it didn't ruin the beer at all, it didn't contribute much to the flavor.  I tasted some of the beer while it was flat, before bottling it, and felt that it was decently balanced but boring.  I used D-45 Candi Syrup to prime it before bottling, and that amped up the Belgian flavor a little bit.  I'm hoping that additional bottle conditioning may improve on that (Update:  It did.  Each week I've opened a bottle it seems to have gotten better.).  Either way, the next time I brew this beer I will definitely follow the advice of a local professional homebrewer and use Candi Syrup.  He said that the syrup provides a better flavor than the rocks or granulated stuff, and I think he's right.  I might consider priming it with Brun Fonce, but I'll definitely brew it with the syrup.

Although the original recipe called for more hops than I used, I would not adjust this.  Even if the Candi Syrup provided a touch more sweetness in the next batch, the hops should still be pretty well balanced as-is.

I might also try to monitor and control temperature a bit differently in the fermentation process.  In this case, I left it in the primary sitting in the basement with no thermometer or heating/cooling.  It doesn't seem to have harmed the beer at all, but I have to wonder if better temperature control would have improved it... or if keeping it closer to the top end of the yeast's tolerance near the end might have generated additional esters and phenols common in the style.

Below are some photos taken during the brewing process: