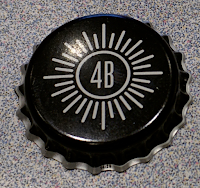 I've been home brewing for a few years now.  I've bottled my beer using a variety of different bottle types, from bombers to plastic bottles with screw-on caps.  I've always treated bottles and caps like a basic commodity.  Bottles are more or less the same, and caps seemed simple enough objects that they didn't require a lot of thought.

With that mindset, when a homebrew site offered 4 Brothers bottle caps at a huge discount (around $1.99 for 144), I jumped at the chance and bought about 600 of them.  It's proven to be one of the worst purchases of the year.  (I am not mentioning the site because everything else I've ever bought from them has been excellent and I don't view this purchase as a failure on their part.  There are reviews on the site of these caps. One of them does mention having trouble capping some bottles with them.

I brewed a Belgian Tripel earlier in the year, which fermented unusually fast and completely.  I had just gotten these caps and decided to use them.  When I opened the first of the bottles, it was completely flat. So was the second, the third, etc.  Since I had used the last of some of my other caps on that batch, I didn't blame the 4 Brothers caps for the problem because other caps from other brands showed the same lack of carbonation.  I think the yeast just flocculated out or went dormant on that batch.

The next batch I used the caps on was an English Bitter.  During the bottling process, several caps were mangled, didn't crimp completely, etc. This was something I hadn't seen before.  I suspected that my capper was wearing out. I completed the batch and bought a replacement capper, and later a bench capper.

Last night, I began bottling a new Belgian Tripel.  The bench capper had an annoying tendency to hold on to the bottles after capping and lift them up, so I set it aside. The plastic "wing" style cappers (I now had three) kept having problems with the 4 Brothers caps, too.  After having five or six "reject" caps in about 20 bottles, I knew something was wrong.  When I grabbed the cap on one of the finished bottles, I found that I could actually TWIST it easily on the bottle. It wasn't sealed properly.  The same was true of several of the others.  Now I knew the problem was the 4 Brothers caps.

I sealed everything up and drove to a local homebrew shop, where I bought two packages of LD Carlson caps.  I uncapped all the bottles I'd just done and re-capped using these new caps.  I didn't have a single mangled reject and every bottle sealed easily.  None of the caps were loose this time.

I'm going to stop short of saying these are bad caps or that they are defective somehow.  It's entirely possible that I unknowingly ordered large 29mm caps.  It's possible I just got a bad batch of them.  It's hard to say, and at this point it doesn't matter.  The bottom line is that these nearly ruined two batches of homebrew for me, and possibly contributed to issues with a third batch.  I don't plan to ever buy or use these again, and I've already tossed the one I purchased.

The caps seem to be the same size as the LD Carlson caps that worked fine.  For example, here is a side-by-side photo of the top of each cap:

And here is the bottom:

The rubber seals underneath are different.  The 4 Brothers caps seem to have a larger "gasket" ring than the LD Carlson caps, but otherwise look the same.

Holding them together in my hand, I can't tell that either is larger or dramatically different from the other, so I can't account for the difficulty I had using the 4 Brothers caps.

The lesson I'm taking away from this experience is that when purchasing a new brand or style of bottle caps, I should only use the new caps to do a small percentage of the batch of bottles.  The rest should be done with a "known good" brand.  That way, if the new caps are defective, they'll only ruin a few bottles and not my entire batch.  I'll also be paying closer attention to my capping efforts and cappers to make sure the bottles seem to be sealing properly.