iMake's Graincoat Jacket for The Grainfather 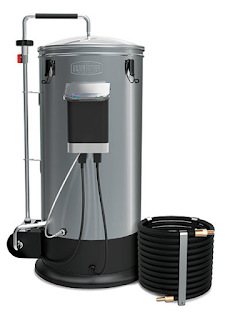 As I've mentioned several times on the blog, I acquired iMake's The Grainfather RIMS brewing system in August 2015 through their Kickstarter campaign that began in March of that year.  The system and its excellent counter flow wort chiller is pictured at the left.

When I first got The Grainfather, I was frustrated with it.  In part, this was because I had based my expectations on reviews of the non-US version of the device, which has a lot more wattage and voltage flowing through its heating element.  It could heat mash water a lot faster than mine and get the wort to a much more rolling boil a lot more quickly.

In experience to date, the US version of The Grainfather takes about a minute to heat a five-gallon load of water or wort 1 to 2 degrees Fahrenheit.  So heating mash water from my current (January 2016) tap water temperature of 57F to a typical mash temperature of 151F (a 94F change) takes anywhere from 45 minutes to 90 minutes.  If you compare that to the 240V 2000-watt European version, it's quite a bit slower.  This often means that my total elapsed time for a batch of home brew is anywhere from 6 hours to 8 hours, including prep and cleanup.  This is quite a time investment for five gallons of beer.

Enter "The Graincoat" accessory.  This $50 (plus shipping) product is sold by iMake.  It wraps around The Grainfather's kettle during mashing and boiling, and is designed to help hold the heat in.

To be perfectly honest, I didn't hold out much hope that it would make a big difference.  Out of the package, it feels relatively thin and flimsy, though paradoxically well made.  It's basically a big foam insulator that wraps around The Grainfather and holds together with hook-and-loop (e.g., Velcro) fasteners.

To install The Graincoat, you must first remove the temperature controller, pump cord, heating element cord, and temperature probe cable.  Then, you position The Graincoat in place and wrap it around the kettle.  Once you have it in position, you make it fit snugly and connect the fasteners together.  Then, you reinstall the control box and reconnect all the cables.  This sounds a lot worse than it really is.  I think it maybe took me about five minutes to install.  Once it is installed, it looks like the picture below. 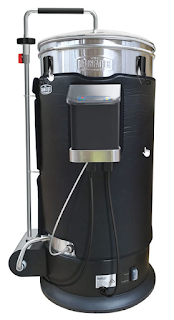 At the right, you see The Grainfather with The Graincoat installed on it.  It is a nice looking accessory and fits the kettle perfectly.  There was no need to trim anything, shift things around, etc.  If I ever want to remove it to clean it, that's as simple as removing the control box and cables, unhooking the fasteners, and (according to the instructions) tossing it in the washing machine.  (But, I'm guessing, NOT the dryer.)

Now, down to the real question.  Does it work?  In a word, yes.  As I write this, I'm brewing a batch of Belgian Tripel in The Grainfather.  With The Graincoat attached, I was able to take 5 gallons of mash water from 57F to 151F in about 40 minutes.  That used to take me 45-60 minutes.  The mash temperature has held much more consistent since I started, which ought to help the enzymes break down the starches more effectively.  The result ought to be an increase in brewhouse efficiency.  The jury's still out on that.


So for a single batch, The Graincoat reduces your wait time by about 30 minutes over the entire batch.  That's a good chunk of the time it takes to brew a batch of beer with it.  Given that I'm typically brewing a batch or two a month, that's at least 6 hours of brewing time (enough for another batch) saved in a year.  That's well worth the $50 asking price, I think.