September 11, 2016
A few months ago, I made an attempt to clone the excellent Trappistes Rochefort 10 beer in my Grainfather. The resulting beer turned out well, but had two significant flaws. It had no head when poured into a glass and it was missing a caramel/toffee note that was in the original beer.

Since then, I believe I've sorted out the foam/head issues. The original recipe used a high percentage of adjuncts (D-180 candi syrup), relatively low-alpha-acid hops (4% and 6.4%), and probably had yeast that got a bit "tired" after fermenting an 8.5% or higher beer. In this version of the recipe, I've replaced some of the Pilsner malt with Cara-Pils and Melanoidin malts, which I've found produce an excellent creamy head without appearing to affect the flavor of the beer. I also replaced some of the Styrian Goldings hops pellets with German Northern Brewer pellets at 10.1% alpha acid. I'll also bottle the beer with a freshly-rehydrated yeast and priming sugar, which should ensure proper carbonation.  All of this combined should produce a well-carbonated beer with a whipped-cream like head on top. At least this worked well in other beers I've brewed recently.

The missing note in the flavor was difficult to find, but eventually I noticed it. To provide that missing element, I replaced some of the Pilsner malt with Dingeman's Cara 45 malt. We'll see if that does the trick. If not, a future version will include a different malt.

Heated 6 gallons of water in The Grainfather to 154F with a Campden Tablet to remove any chlorine and chloramine from the water.

In a separate vessel, heated two gallons of sparge water (only one of which I planned to use).

Crushed the grains and stirred them into the mash water, put on the mesh lid, dropped in the pH 5.2 stabilizer, put on the recirculating arm, and turned on the pump.

Sparged with one gallon of water at 168F.

While sparging, turned The Grainfather's thermostat up to 200F so that it would heat toward a boil while I sparged the grain.

Checked the kettle volume, which was 6 gallons.

Stirred the wort vigorously and checked the pre-boil gravity, which was 1.055 SG or 13.5 Brix.

At the completion of sparge, I set The Grainfather's controls to boil.

A 60-minute boil began, with the following schedule:

Turned on the cold water supply to the wort chiller and pumped wort into the sanitized fermenter.

Since the wort exited the wort chiller at 83.5F which was too hot for the yeast, I used my fermentation control system to drop the temperature to 70F.

At 70F, I pitched the yeast and sealed the fermenter.

I've learned that if I want a good yeast flavor profile from a Belgian yeast, it's generally good to just let the yeast ferment at its own temperature. For that reason, I didn't use any temperature control on the fermenter. I left it in my 65-68F basement and let the yeast do its thing.

The beer was allowed to ferment for four weeks before bottling.

I bottled the beer with 5.4 ounces of corn sugar and rehydrated champagne yeast to ensure carbonation. The bottles spent a week in an insulated temperature-controlled environment at 76F before chilling and serving. Additional time was spent at the basement's ambient temperature of 65-68F. 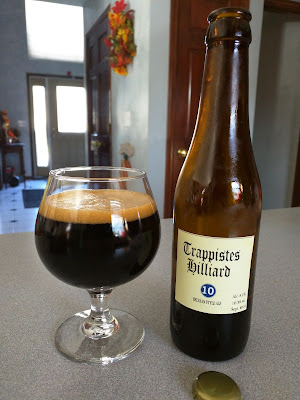 At left you see a finished bottle, labeled and poured into a tulip-shaped glass. As you can see, the beer pours a deep dark brown. There are some reddish notes if you hold it up to a bright light.

The head is a nice light brown. It starts somewhat coarse like a cola head, then quickly turns creamy and frothy. It lasts maybe 30-60 seconds.

The aroma is a nice mix of dark fruit, leaning toward prune, with caramel and toffee notes. A hint of dark roasted grain and noble hops is in the background.

The flavor may make it one of the best things I've ever brewed. Dark fruit from the candi syrup is present but not dominant. Caramel, coffee, and chocolate appear in the middle. The finish is a coffee and hops bitterness that lingers.

I have yet to compare this with a real Trappistes Rochefort 10 or even against my version 1.0 recipe, but it holds up extremely well on its own. If you enjoy Belgian Strong Dark ales, I don't think you'd be disappointed with this one. It's not cloyingly sweet, and isn't overly dry. The hops bitterness is clear and present, but not overwhelming. It really turned out well.

When I brewed this, I learned something new. I've been trying to get my final volume in the fermenter right. I want a full 5 gallons if possible. I've learned that this means that I'll need approximately 5.6 gallons in The Grainfather's kettle after the boil. I'll lose about a quart in the bottom of the kettle, and as the wort chills from boiling to yeast-pitching temperature, it will shrink in size by about 6%. For the first time tonight, I achieved a perfect 5.0 gallon fermenter volume. That isn't what I learned, though. What I learned is that tinkering with the volumes this way without considering the batch size in BeerSmith will knock your pre-boil and original gravity figures off.

I calculated all my original numbers for a batch size in BeerSmith of 5 gallons. As a result, I came up low on the gravity - getting 1.077 SG when I expected 1.088. This has a simple explanation and fix. If you adjust the BeerSmith batch size to 5.6 gallons instead of 5.0 gallons (without changing the grain or hops amounts), the estimated original gravity drops to 1.078. Mine worked out to 1.077.

So, moving forward, I need to adjust my batch size to 5.6 gallons and tweak grain and hops amounts to account for this increased volume. Then, my fermenter volume should hit 5.0 gallons consistently and my gravity figures should come out right as well.

All things considered, I'm quite happy with how this beer turned out. If I changed anything about it, I would possibly swap out a pound of the D-180 with a pound of D-90 candi syrup to punch up the dark fruit flavor. It comes through in the aroma nicely, but isn't quite coming through in the flavor the way I'd like it to.