March 14, 2017
A while ago, I read something about Mandarina Bavaria hops. One of the brewing sites had them on sale at the time. They said the hops can impart a mandarin orange aroma and flavor to a beer. I had no idea what I would do with them, but I bought some anyway.

After doing some thinking about it, I thought they sounded like they might go well in a blonde ale. I thought a nice malty blonde ale with some added bitter orange peel and sweet orange peel, combined with a couple of healthy later additions of Mandarina Bavaria hops would create a very nice spring or summer beer.

Not having a ton of faith in my recipe creation skills, I decided to do a 3-gallon batch for this one (or 3.9 gallons before shrinkage, trub, and other losses). I also wanted to see if The Grainfather boiled a batch any harder if it was a smaller size, and if this impacted chill haze.

Update 06/04/2017:  This beer took second place in the fruit beer category at the Ohio State Fair's 2017 Homebrewing Competition.  This was the first time I've ever competed with a beer, so it was gratifying to see it place so well.

You might be wondering the "why" of some of the ingredients. The Munich Malt is there to sweeten the beer and add some body. The Carapils is there to help generate a nice head. The Caramel 60L should add a slight reddish or orange-ish color to the beer, to help visually evoke the orange flavors and aromas. I used Tettnang for bittering just to hopefully add a little complexity. Mandarina Bavaria is there, as I noted earlier, to give a good mandarin orange flavor and aroma. The orange peel varieties are present to punch that up a little more. I'm even considering adding some in the secondary, but we'll see. This is the first time I've really done a recipe from the ground up, so it will be interesting to see how it comes out.

According to BeerSmith, this brew should have the following specifications:

According to my calculations, The Grainfather formula resulted in a mash thickness of approximately 2 quarts of water per pound of grain. I knew that would drag down the efficiency of the enzymes, so I increased my mash time to 90 minutes for this batch to hopefully allow for a full conversion.

I sparged the grains with the water. My expected kettle volume post-sparge and pre-boil was 4.2 gallons approximately. In reality, I ended up with about 4.1 gallons at a gravity of 10.2 versus the 10.1 I expected.

A 75-minute boil, with the following schedule:
I expected a post-boil volume of 3.7 gallons. By time trub and shrinkage kicked in, that would work out to about 3.0-3.1 gallons in the fermenter.

The reality turned out to be a post-boil volume around 3.5 or 3.6 gallons, with just a little under 3 (best guess) in the fermenter. The Grainfather's counterflow chiller again did an amazing job, with wort flowing into the fermenter at approximately 64.5F. My expected original gravity was 11.9 Brix, but I achieved 13.1 Brix at a lower volume of wort.

The wort was pumped into a sanitized SS Brewing Technologies Brewmaster Bucket. Given the small volume, relatively low gravity, and low ambient temperature in the basement this time of year, I decided to forego any temperature control during the first stage of fermentation.

A taste test after two weeks of primary fermentation would hopefully tell me if the beer would benefit from lagering at 50F for a while or could be dosed with gelatin and cold-crashed to clarify.

Update 3/18/2017: I extracted a sample from the fermenter last night to see how it's coming along. It has a good light color. Since we're still mid-fermentation its aroma had a good bit of diacetyl to it. The beer itself was surprisingly dry and bitter. There was some hint of orange to it, but not what I expected. I boiled 16 ounces of water, then dissolved 16 ounces of Orange Blossom Honey in it. When this cooled, I added it to the fermenter.

Update 3/24/2017: While home ill with the flu (a strain I wouldn't wish on anyone), I took a moment to check on the beer. Fermentation was complete, reading 6.7 Brix which BeerSmith and I worked out to 1.004 SG or 1.0 Brix when adjusted for alcohol. Needless to say it's very dry, but the orange element comes through clearly in the flavor and the color is lighter than I expected. It seemed very cloudy still, so I added gelatin finings and began cold-crashing it in the mini-fridge. If the last remnants of this illness are gone by then, I'm hoping to bottle it Sunday. That would have it ready for tasting around April 9.

3/26/2017: The beer was bottled today with my wife's help. It was bottled at 43F and yielded 3.25 gallons according to the bottling bucket markings. However, this yielded a total of 32 12-ounce bottles - an even 3 gallons - so I question the bucket's markings. Carbonation sugar of 2.5 ounces was added based on BeerSmith's calculation that this would generate 2.8 volumes of CO2 in the finished beer, which is good for the style. The gelatin finings appeared to have improved the clarity of the beer significantly. I expect that to improve further after carbonation and extended refrigeration.

This beer was an experiment on several levels. I wanted to develop a nice citrus beer with strong notes of orange, maybe even bordering on overkill. I wanted to try brewing a 3-gallon batch in The Grainfather instead of my usual 5 and 6 gallon batches, to see if a smaller batch boiled any harder. I have wondered if one cause of the haze in my beers is the somewhat weak rolling boil The Grainfather does. That's something I plan to test after primary fermentation is over.

I can say that the boil this time, which started at approximately 4 gallons and boiled down to around 3.5, seemed more vigorous than usual. The surface of the wort churned more than I am used to seeing in the 5 and 6 gallon batches. Whether this will translate to a clearer beer remains to be seen. I didn't treat this batch with Clarity Ferm from White Labs so if it comes out nice and clear, the more vigorous boil could be the reason. (Update 3/24/2017: Since it seemed very cloudy still, I've added gelatin finings to it and began cold-crashing before bottling.)

April 15, 2017:  The beer has been bottled and carbonated. It generates a nice creamy white head that lasts a while before incorporating into the glass and leaving behind some spotty lacing. The aroma is malty and slightly orange. The color is an amberish gold and as of this writing it's a bit hazy. I plan to condition the bottles in the fridge for a week or two before tasting again. The flavor starts with a mild bitterness, some orange peel, a bit of malt sweetness, and a final bitterness that's reminiscent of the pith of an orange. The orange flavor and aroma is far more subtle than I expected, given all the items that went into this. Still, it's a very nice beer that's really easy to drink.

May 22, 2017:  Although I am personally very pleased with this beer, the response I've gotten from others has been less enthusiastic. Most who have tried it simply say it's "OK" or "too bitter" to suit them.  Regardless, I've entered it as a fruit beer in a state-wide competition.  I won't know until mid-to-late June how it did.  I'll be back to share the feedback when I have it.

The first judge's comments and scores were:


The second judge had this to say:
Below is one of the two medals I earned at the Ohio State Fair this year (one of which was earned by this beer): 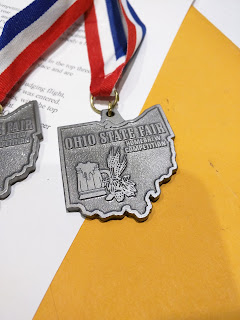 Since the scores on this beer were quite high as it was, I don't want to mess with it too much. Still, I do think there is room for improvement based on the comments I received.  Here's what I think I will do differently the next time I make this beer: