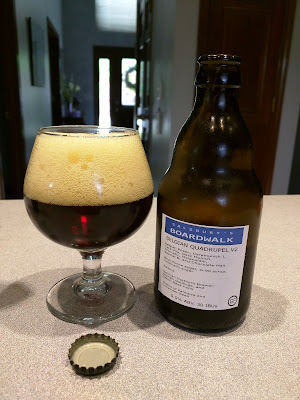 A little over a year ago, I brewed a variant of the "Dixie Cup Boardwalk Belgian Quadrupel" that appeared in a 2007 issue of BYO magazine. It turned out to be one of the tastiest beers I'd ever brewed, and I think I have no more than a bottle left... and that's only because I jealously protected it to ensure it would still be around when I brewed it again.

In my post-mortem notes for that batch, I said I wanted to do the following in version 2.0:
This results in the following modified recipe and procedure:
The BeerSmith statistics and estimates for this batch are:


This will be a 12% adjunct beer, which is well within Belgian style guidelines and shouldn't stress the yeast too much.

The mash water was heated to 152F. The grains were crushed and stirred into the mash water a few scoops at a time to ensure proper moistening. The lid was placed over the mash tun and the recirculating arm attached. A 90 minute mash was then performed at 152F.

After 70 minutes of the intended 90 minute mash, I did an iodine test. It showed complete conversion, so I decided to terminate the mash and begin the mash out. The temp controls were set to 168F. When the temp was reached, I waited 10 minutes and then removed the grain basket. I also set the temperature controls to heat the wort to 200F to save time bringing it to a boil later.

It took the grain bed about 20 minutes to drain and sparge, by which time the kettle had heated to approximately 185F. The yield was 6.75 gallons, compared with the 7.3 gallons expected. Water was added from the sparge kettle to get volume up to the expected level. Original gravity was then measured at 14 Brix, well below the expected 17.3.  I've heard that The Grainfather's efficiency drops with larger grain bills, and that might be what's happening here. It's also possible that BeerSmith calculated that gravity on the assumption that some of the brewing sugars were malt extracts (I noticed one listed that way). I decided not to sweat it too much.

While the wort heated to boiling, I discarded the grain and rinsed the gasket. I then mixed up some PBW and started cleaning the grain basket, overflow pipe, etc., since I had nothing better to do but wait. (I've found that the more cleaning you do during the waiting periods of brewing the shorter your elapsed brewing time will be for a given batch.)

The following boil schedule was followed:

The expected kettle volume post-boil was 6.7 gallons at a gravity of 20.9 Brix.

The wort was pumped from the kettle, through the counter flow chiller, into the sanitized fermenter.

The expected fermenter volume was 5.8 gallons at 20.9 Brix. Actual was 6.0 gallons at 19.0 Brix. According to BeerSmith, this corresponds to an efficiency of 74.7%.

The wort reached the fermenter at 68F thanks to the chiller.

The wort was oxygenated for 60 seconds with pure oxygen and a stone.

White Labs Clarity Ferm and ECY13 Yeast were pitched into the wort and a blow-off tube attached to the fermenter.

The planned fermentation schedule is:

After this, the beer would be bottled with the goal of 3.0 volumes of CO2.

Update 04/15/2017: Fermentation is definitely finished. No airlock activity. No visible yeast floating on top of the brew, and the refractometer reads about 8.5 Brix, My expected final gravity was 9.9 Brix. This works out to an estimated 9.54% ABV, which is higher than the 8.5% I expected.

Since I also transferred my Australian Sparkling Ale to secondary today, it yielded an interesting comparison between the two yeasts. Despite this beer having a much higher gravity and a lot more sugar to ferment out, it made relatively little mess compared to the Cooper's Ale yeast.


To further compare the two, the Quad didn't use anything other than an standard canister style airlock. The Australian Sparkling Ale had a large bore blow-off tube and glass jug. Despite all that breathing room, the Australian beer blew out through the tub, blew beer into the jug enough to turn its water medium brown, blew beer out the top of the jug onto the shelf, the floor, and across the room into the drain. There wasn't any exterior mess from the Quad. Moral of the story: Coopers Ale Yeast needs a lot more headspace and breathing room than Safale T-58.

April 15, 2017: Given that a sample extracted from the primary was quite cloudy, I decided to use gelatin to fine the beer before bottling. Since my mini-fridge is currently busy fining the Australian Sparkling Ale, I'm going to try an experiment. The gelatin will be added to secondary while it's left out at ambient basement temperature (around 65F) until the mini fridge is available to cold crash the Quad. I'll take a sample from the fermenter then to see if it's clarified at all, and again after it comes out of the mini fridge later on. In theory the gelatin will do some good at room temp, but really have the most effect when the beer is colder.


The last batch of this beer was one of my all-time favorites, so I decided to go with a larger batch size this time around. Although 16.5 pounds of grain is within The Grainfather's 20-pound limit, it does seem to "push" the system. Wort tended to go down the overflow tube more than through the grain bed this time. Efficiency seemed to suffer as a result. The last time I did this recipe, my efficiency calculated out at 71.9%. This time it was 74.7%. This leads me to think The Grainfather is much less efficient with larger grain bills. I typically see efficiency in the 80% range with most batches.

Two days after the brew started, there was no activity in the airlock. Opening the lid showed no krausen either, indicating the yeast was in fact not viable. I added a packet of White Labs Bastogne yeast that was still reportedly viable and a packet of Safbrew T-58. The next day the airlock was actually rattling audibly from all the yeast activity.

April 9:  It's now approximately a week since I brewed the beer and airlock activity has slowed considerably.  A sample extracted from the fermenter was very cloudy, but had the expected reddish-brown color. It also had a noticeable hops bitterness to it, more so than v1.0 did.

April 15: The beer is a nice reddish medium-brown color. It's still quite cloudy, which I will probably correct with some gelatin finings since I want to enter the brew in competition and want it to look good. Since my mini-fridge is busy cold crashing the Australian Sparkling, I may not bother with the gelatin for a few days.  A taste sample of the beer shows a good Belgian dark fruit flavor and aroma, with none of the burn I felt from the first version of the recipe. It does seem to have a little residual sweetness, which I was hoping for. I'm as happy as I can be with it until it's been bottle conditioned and I get a taste of the finished product.

April 24: The beer has been in the mini-fridge since Thursday and is finally beginning to clarify. I'm planning to give it another day or two before bottling. The aroma is one of bubblegum and plum or prune. The flavor is more mellow than it had been, and less bitter.

May 10:  I have bottled the beer and it's been spending time in my "hot box" to carbonate. This should ensure full carbonation. I placed a bottle in the refrigerator last night so that I can try it and give you an update tonight. The last time I tasted it, I was a bit disappointed by a somewhat harsh bitterness in the flavor. My guess is that it might be from the Northern Brewer hops used to bitter it. I haven't used a lot of high-alpha hops varieties in my Belgian beers, and I have generally been happy with them. I think this might be my last experiment with them. (I'd been trying them to see if they helped with head retention.)

May 13: The bottles were removed from the "hot box" today and labeled. I will be chilling and doing a taste test soon. I'm also planning to do taste tests on this one approximately monthly to see how it improves with age.

May 14: Below you see images of the final beer. It's got a nice clear mahogany color and (in this particular bottle that included a carbonation drop in addition to priming sugar) a nice thick and creamy beige head that lasts quite a while. I find that a combination of Cara-Pils and Melanoidin malts make for an almost whipped cream like head of foam. The aroma is a little yeasty with some dark fruit hints. The flavor starts with sweet malt, then dark fruit flavors come up in the middle. The finish is a bit bitter, with a harshness to it that may come from the Northern Brewer hops. I'm planning to age this at least six months, so the yeasty aroma and bitterness may mellow out during that period. Regardless it's still a good looking and tasting quadrupel.

I'm planning to enter this batch in two different competitions in 2017. One is the 22nd Annual Homebrewing Competition at Barley's Ale House. The other is the homebrew competition at the Ohio State Fair.

In a future batch, I plan to use the other hops varieties (Styrian and Saaz) to handle the bittering to see if that removes the harshness. I'm also considering splitting the batch in half and adding oak chips to half of it to produce a barrel aged variant.  I'm also wondering if the malt bill could be simplified, as it seems to contain more malt varieties than many other quad recipes I've seen.


May 22:  I am entering this beer in a state-wide home brewing competition. Although it is a tad more hoppy than I care for, I suspect that most judges would say it's "about right" in that regard.  I'll know in mid-to-late June, and will come back here to update the post when I get the results of judging.

June 4, 2017:  Today I received my judging results from the 22nd Annual Afternoon with the Brewers competition.  This beer took third place among all the entries, of all the styles.  Although I had also entered it in the Ohio State Fair for 2017, it did not place among the top four Belgian Strong Dark Ales at that competition.

As I mentioned above, this beer took third place at Barley's 22nd Annual Competition.  Its notes and scores from the first judge were:


The second judge gave these notes and scores:
At the state fair, I received an official score of 24.5 for the beer.  Given how well it scored at Barley's, this is interesting.


The other judge's comments were:
It's interesting to note the difference in scores here.  The judges at the Barley's competition scored the flavor almost twice as high as those at the fair. This is for bottles from the same batch, bottled at the same time, and judged one day apart (the fair judging one day earlier than Barley's).

This beer had a very "bipolar" performance in competition.  At the state fair, it was seen as a barely adequate. At Barley's, it took third place overall.  In my own opinion, it still needs work.  This version is not as good as the version 1.0 recipe and not quite as good as the version I made with Iraqi Date Syrup in place of some of the sugars.  Here's what I plan to do next time around:


I think these changes will get the Quad a lot closer to what I want it to be.

Posted by Michael Salsbury at 11:30 AM