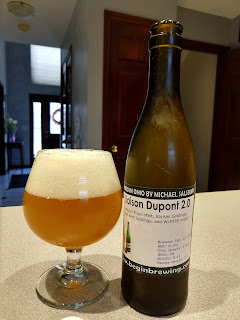 Probably my favorite Saison out there is Saison Dupont.  I recently read Jeff Alworth's The Secrets of the Master Brewers and reviewed his notes about how Dupont's beer is made.  I used this to inform my own Saison recipe which will hopefully come close to it.

A few notes from Alworth's book, for those thinking of making a Saison:
With all that said, here's my attempt at a Saison Dupont clone.

Although I'm not a big fan of East Kent Goldings, I thought they might lend a bit of citrus to the finished beer (something missing from my previous Saison), so I mixed them in with the Styrian Goldings.

The Picobrew recipe crafter estimates that the finished beer will have these characteristics:

This mash schedule is meant to reproduce Dupont's mash at 113F followed by a gradual increase in temperature to 162F over 105 minutes.


Boil schedule:
This boil schedule should result in a color comparable to that of the real Dupont Saison.

After the boil was over, I transferred the wort to a kettle and used my immersion chiller to bring it down to 82F. From there, I pitched it on top of the yeast cake left over from the previous Saison batch bottled earlier in the day.  This may reduce the stress the yeast is under (since the yeast is unlikely to be underpitched this way) but hopefully that won't make a big difference.

Fermentation schedule:
This should get close to the actual Dupont Saison fermentation process.

Note:  I pitched this atop the leftover yeast from the first Saison I brewed. Unfortunately, I forgot to close the spigot on the fermenter after bottling that one, and about a bottle full of wort ended up in a big puddle on the floor. This was both humiliating and irritating at the same time, and meant a lot of extra cleanup work.

02/17/2018:  The brewing process went smoothly. and yielded 2.5 gallons of wort at what my refractometer measured at 15.5 Brix. After adjustment, this works out to a gravity of 1.065 SG, which is pretty close to the 1.068 SG the recipe crafter software predicted for the batch.  Color was a touch darker than I thought it would be, given that the recipe contained only Pilsner malt, but that was the point of a 90-minute boil in Dupont's recipe.

02/25/2018:  The airlock is showing no activity. A sample taken from the spigot on the fermenter looked like a fresh White Labs yeast culture.  The aroma was mildly funky. The flavor was dry, slightly citrusy, and the hops seemed well-balanced against the malt.  I think the beer will turn out well.  The blend of EKG and Styrian Goldings yielded a good hop flavor as well.

03/17/2018:  I chilled and opened a bottle of the beer.  It has an excellent aroma, everything you expect to get from a professionally-made Saison. The flavor is light and pleasant, mixing some peppery spiciness and fruitiness along with the funk.  It's not too bitter, not sweet.  It's one of the best Saisons I've ever had - and much better than the 1.0 recipe I made earlier.  The 1.0 recipe lacks the aroma element and is bland in comparison.

04/09/2018:  Three bottles of the beer were left at Barley's Ale House for their annual home brewing competition. I should have the results in a couple of weeks.

4/12/2018:  Following the BJCP Guidelines and Scoresheet, here's how I would judge this beer.  (I wanted to do my own scoring to compare with what the judges provide later, to see where I my observations are relative to theirs. Am I on the mark, or way off?)
4/24/2018:  The results from the Barley's judges are in.  My scores were way out of line compared to theirs.  The beer received total scores of 25, 23, and 27.  The individual scores and judges' notes are below:

At least two judges mentioned a vegetable flavor as a hint of a possible infection. That's something I will have to look for when I sample the next bottle.  I try to be very meticulous about cleaning and sanitation, so that comment worries me.

I've been trying to dial in carbonation using drops, since I've had too much in other beers because of inconsistent volumes coming out of the Zymatic.  For this batch, I used a large Coopers drop and three small tablets. I probably should have used only one or two small tablets to nail the carbonation amount.

I'll probably add some orange peel to the next batch to dial up the orange flavor. I'll also pitch on fresh yeast, as that may be where the notes of infection or vegetal flavors came from.

Ultimately, I guess I liked this beer a lot more than the judges did.

06/03/2018: Because I wanted some additional opinions on this beer, I submitted it to the Ohio State Fair to see how it performed in competition there. It scored 25.5, which is in the ballpark of the scores I received at Barley's. At the fair, the first judge had this to say:


The other judge said this:


Based on the judges' comments, there are changes I will make if I brew this again: