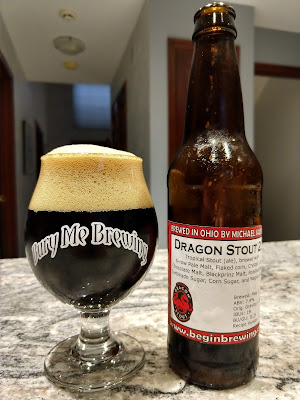 My first attempt at brewing a Dragon Stout clone resulted in a beer that initially tasted pretty good, but began to dry out and lose some of its subtle flavors and nearly all of its sweetness. When entered into competition, it scored extremely low. I might be upset about that if it wasn't for the fact that it was a published recipe, not something I'd come up with on my own.  This version is no different. It's a recipe that did not originate from me, but looked like a closer match to the real beer than the previous one.

Some readers may be wondering why I chose an ale yeast for this batch instead of the lager yeast I used last time.  Although the BJCP says that the style is typically made with warm-fermented lager yeast, I decided that a relatively cool fermentation with ale yeast might achieve the same flavor profile. The ESB strain often produces some fruity notes (typically apple and/or tropical fruit) for which the Tropical Stout style is known.  It may prove a poor choice in the end, but I wanted to try it out.

According to the Zymatic Recipe Crafter, the beer should have the following characteristics:

The wort did foam out of the top of the step filter starting around the end of the Dough In step of the mash.  During the first step of the mash, it foamed quite a bit more, but didn't seem to flow over the lid or into the drip tray.  Foaming seemed to reduce during the second step of the mash, but never completely quit.  This seems to be just "normal operation" for the Zymatic.

After brewing, there was approximately 2.25 gallons of wort produced.  Adding sterile distilled water to this dropped the gravity down to the expected 17.8 Brix and brought the volume back up to the planned 2.5 gallon amount.

05/12/2018:  The chilled wort was poured into a sanitized fermenter into which the ESB yeast had already been added.  No temperature control will be utilized in this case, as the beer is being kept in an environment with an ambient temperature in the mid-60's Fahrenheit, and the Lallemand ESB yeast is said to work optimally in the 68-72F temperature range.

06/02/2018: The beer is now out of the hot box and appears to be fully carbonated. Yield was 24 bottles. A bottle chilled and opened last night was good. I didn't take full tasting notes or a photo yet, but will do so in the near future.

06/14/2018: The beer pours a pitch black color with thin beige/tan head that lasts a little while before reincorporating into the beer. The aroma is chocolate with dark malt, and sweet. The flavor starts sweet and malty, becoming more roasty and chocolatey toward the middle, finish is malty and has a somewhat lactose or artificial sweetener note to it that I'm not crazy about. That might be something from the molasses in the turbinado sugar, or perhaps some combination of residual malt sugars combined with the ESB yeast flavors. Regardless, it's a nice beer but not one I'd enter into competition. I also don't view it as tasting that much like a real Jamaican Dragon Stout.