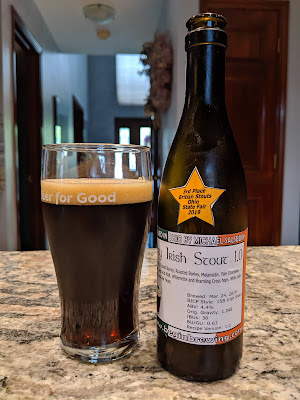 Having managed to get three successive batches out of the Brewie+ which hit my volume and gravity goals, today I decided to brew a Dry Irish Stout for possible competition. I like the style and I have never brewed it before, so it seemed like a good time to try.

I began by reviewing some articles online about brewing the style, then by considering the BJCP criteria for it. I took one of the published recipes and tweaked it to suit my taste (hopefully).  I added Melanoidin malt and Carapils to try to get the beer to have a nice head on it. I used Willamette hops and Bramling Cross for a little twist to the style, while not taking it too far off base. The Bramling Cross hops are used in British stouts and reportedly carries fruity, citrusy notes with some blackcurrant, loganberry, gooseberry, and lemon - sometimes even with vanilla. That should all do nicely in the stout. I'm adding gypsum to help punch up the hops, since I'm hopping it toward the lower end of the style (the style's range is 25-45 IBUs, and I'm aiming for 30).

BeerSmith 3 estimates the following qualities for this beer:

The mash schedule:
Boil schedule:
The Brewie+ was instructed to chill the wort to 62F after the boil was over.

03/24/2019:  I apparently ordered two extra pounds of Maris Otter malt when I ordered grain for this recipe. My original plan was 2.64 gallons of wort at a gravity of 1.042 SG. When I opened the bag from the homebrew shop, I noticed the extra Maris Otter in it (and it was mixed with all the other grains, so extracting it wasn't really an option). To correct that, I scaled the recipe up to 3.5 gallons. Fortunately, I had enough extra specialty malt on hand to reach that volume. The 4.8% ABV is a little above the BJCP criteria for the style but I'm hoping it will be close enough that no one knocks my score down for it in competition.

The Brewie appeared to load the correct amount of water for the mash process, and required no adjustment by me. For the sparge, it loaded about 3 liters more than I wanted, so I removed that excess water before adding the gypsum to it. I held onto the extra water, however, as I wanted to use it if the pre-boil volume was too low later on or the gravity too high.

The mash appeared to go well, with the wort achieving a nice deep brown color pretty early on.

During the mash, before the sparge started, a refractometer reading was 19.0 Brix. That represents standard gravity of approximately 1.081. Assuming the sparge water dilutes that quite a bit, we would still appear to be on track for a 1.048 SG original gravity.

After the sparge, the wort level was much lower than expected. I ended up adding back the water I removed during the mash/sparge process and a little extra to hit the expected depth of 18.0 cm in the kettle pre-boil.

The refractometer registered 11.1 Brix pre-boil at an estimated 15.8 liters (4.17 gallons) in the kettle. That works out to a gravity of approximately 1.046 SG. One of the tilt hydrometers registered the gravity 1.033 SG pre-boil. I figure reality is somewhere between those two figures, perhaps around 1.0395 or 1.040 - which is where my calculations had estimated it would be.

In the fermenter, the gravity read around 1.052 SG. After adding the yeast slurry and some distilled water, I got that to 1.048 with a volume just a hair under the 4-gallon mark in the fermenter. The temperature of the wort at that point registered 59F.

03/25/2019: Roughly 14 hours after the yeast was pitched, we're seeing fermentation activity. Gravity is registering 1.043 SG this morning, down from 1.052 SG last night.  The temperature is reading 61F, up from 59F when the yeast was pitched but well below the yeast's optimum range.

04/07/2019:  The beer was bottled today, with four small carbonation tablets per bottle (medium carbonation).  A flat, warm sample from the end of the bottling process had a nice chocolatey and roasty flavor to it. I'm looking forward to the finished beer.

06/02/2019:  This beer was entered into the Ohio State Fair Homebrewing Competition. It took third place in the British Stouts category, making it my only win for the year so far.