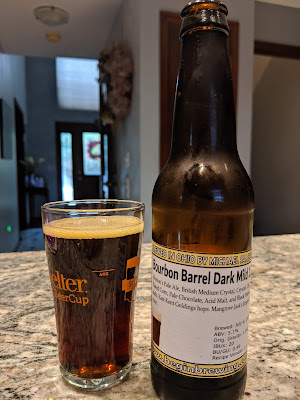 Although I was pretty happy with my original Dark Mild recipe, it unfortunately picked up a bacterial infection and had to be dumped.  A second Dark Mild suffered the same fate.

In my notes on the original version, I mentioned that I wanted a little more crystal malt and more body.  Toward that end, I've shifted the mash temp upward for most of the mash and added another ounce of Medium English Crystal malt. I've also added some flaked corn, which the BJCP notes is a common ingredient in the style.

The beer is expected to have the following characteristics:
Mash schedule:

The Protein Rest is something I've added since using the PicoBrew Zymatic and Brewie+.  In my experience, beers brewed in the all-in-one electric systems have had a tendency to develop chill haze.  Adding this rest seems to help the enzymes break up Beta Glucan and get me clearer brews.

Fermentation plan:
Once fermentation is finished, the plan is to bottle the beer using 3 small Brewer's Best carbonation tablets (low carbonation) and to allow it to condition at ambient basement temperatures until carbonated.

07/06/2019:  I decided to manually measure the water going into this batch to ensure that it's accurately loaded into the machine.  This took a little more effort, but allowed me to be sure I had the amounts right rather than relying on the Brewie's frequently-inaccurate sensors.  I loaded 8 liters in the mash and 7.7 in the sparge.  I had an extra pellet of East Kent Goldings when I'd finished measuring everything, and I decided to add this (it weighed 0.03 ounces) to the 15-minute addition to give a hint of EKG flavor and possibly aroma... rather than tossing out the pellet.

The beer finished above both volume and gravity.  Gravity came out at 1.042 SG vs. 1.037 SG expected.  Volume came out at 2.8 gallons instead of the 2.5 gallons expected.  Normally I would dilute the beer to hit my desired target, but the fermenter was pretty full with 2.8 gallons, so I decided to leave it high.  It's only 4 points above the high-end for the style in the BJCP guidelines, not enough that it's likely to be obvious.  The ground water is warm this time of year, so it took the Brewie a while to get the temperature down to 76F.  I'll need to use my temperature control system to get this down low enough and hold it there for the recipe. My plan will be to set the temp to 64F and hold it there until the yeast is nearly finished, then ramp the temperature up gradually to 72F.

07/18/2019:  The gravity has continued dropping. It currently registers 1.005 SG.  I'm concerned that the fermentation has already gone past the style's lower limit and could drop low enough to take the beer totally out of style.

07/20/2019:  Gravity has registered 1.005 SG or 1.006 SG since somewhere around July 18.  It's showing no indication of going below 1.0005 so far.  If this holds another day, I'll bottle it and see how it tastes some time in August.  Around 12:30pm, I mistook this fermenter for another one containing a beer I'd intended to flavor with oak and Bourbon, and dropped medium toast oak chips soaked in Bourbon into it.  Rather than try to fish out the strainer full of oak chips, I've decided to leave them in and make this a "barrel aged" beer, too.

07/28/2019:  Gravity is now registering 1.003 SG, which puts the beer at 5.1% ABV and 92.6% apparent attenuation. The glucoamylase, tiny amount that it was, seems to have severely over-attenuated the beer.  A taste of it yesterday showed a touch of barrel aged flavor and a thin body.