January 20, 2020
A couple of months ago, the folks at Tavour offered me a chance to purchase a beer from Strange Roots Experimental Ales in Pittsburgh, PA.  The beer, called Hive Alive, clocked in at 17.3% ABV.  The Tavour folks described it as:


Each velvety mouthful sends your palate fluttering into honey heaven.  That's bee-cause Strange Roots crafted their mead-like Still Ale with copious amounts of real orange blossom honey and malted barley!  And that's drizzled on top of an already-smooth Pilsner malt base, resinous hops, and Pennsylvania wild yeast for a touch of funk... [snip] this brew drips with earth tones, florals, and sugar cookie-like sweetness. All the while, gentle stings of apricot and orange citrus keep the experience from becoming too cloying. 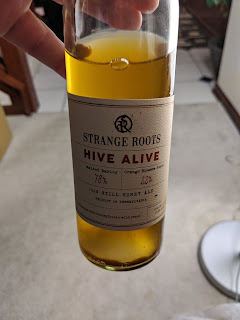 This is the bottle I opened almost two weeks ago. It was really tasty, and inspired me to try my own version of it.

I'm not trying to replicate theirs exactly, which is probably not possible without their wild yeast and knowledge of the hop variety they presumably used.  In fact, I'm planning to leave the hops out of this one.  I'm going to mash it very low so the wort is mostly fermentable (meaning little residual sugar) and the hops may not be missed.  (I could not detect the "resinous hops" mentioned in the Tavour post, or any hops at all.) I'm going to add some bitter orange peel, to dial up the orange note in the flavor.  Although I'm aiming for an ABV close to what they had, we'll see if that's feasible.

According to Brewfather, the brew should have the following qualities:
Mash schedule:

01/20/2020:  I wanted a 2-quarts-per-gallon mash thickness for this batch, which ended up resulting in so much mash water that a sparge wasn't feasible.  In fact, although I had calculated a pre-boil volume of 3.6 gallons, the actual volume came out closer to 4.1 gallons.  This necessitated increasing the boil time to both eliminate the excess water and concentrate the wort a bit.

Original gravity, even after boiling down the volume, only reached 1.096 SG. That's a far cry below the 1.137 SG originally estimated.  I decided to let it go, to see how this turns out flavor-wise.  If it's good, I'll try re-brewing later with an eye toward hitting the 17.8% ABV like Strange Roots did.  Brewhouse Efficiency on this batch hit a mere 58.51%.  I don't know why it was so low, unless maybe the Viking Pale Ale Malt isn't converting well.  It stayed in a good pH range, it was a thin mash, and it had well over an hour to convert, so there's no reason the gravity should have been so low.

01/24/2020:  Gravity has dropped to 1.059 SG and held there for longer than I would expect.  The yeast has pretty much vanished to the bottom of the fermenter. A YouTube video I read recently on sake brewing mentioned that wine yeasts can basically compact themselves in the bottom of a fermenter, trapping in CO2 and to some degree going dormant.  Rousing the yeast and releasing the CO2 can help them continue fermenting.  I swirled the fermenter very hard so that the entire yeast cake was loosened and broken up in the fermenter, which did release a lot of CO2.  But since I couldn't see any evidence of fermentation, I decided to pitch some Crossmyloof Barleywine yeast to see if it would jumpstart a new round of fermentation.

01/26/2020:  Gravity is down to 1.057 SG.  It's been as low as 1.055.  I've added yeast nutrient and amylase, as well as running my degasser through it to get the CO2 released, the yeast back into suspension, and add some oxygen to try to finish up the fermentation.  A taste of it before doing all that yielded a little-too-sweet flavor, but pleasant.  I'd like to get it down closer to 1.021 before calling it quits.

01/27/2020:  Gravity seems to be holding at 1.056-1.057, which suggests a stuck fermentation. I've tried degassing, adding yeast nutrient, and even adding a different yeast strain, to no avail.  That brings me to the next likely candidate here in the Ohio winter, temperature.  Wort temp has been reading 62-63F for days now, so I've swirled the fermenter again to get the yeast back into suspension and placed the fermenter in a temperature control setup that will aim to raise it to 70F over the next few hours to see if this restarts fermentation.  If we hit my target (70F) by morning and there is still no fermentation activity, I'll increase to 75F and swirl the fermenter again to hopefully get it to finish out.

01/29/2020:  At 11pm last night, I swirled the fermenter hard and raised the temp to 75F.  Tonight, the gravity is down to 1.055 SG.  Considering that the fermenter contains both champagne and high-gravity beer yeast, I would not expect the gravity to remain so high.  There is a potential for at least 10% ABV, but we're currently sitting at 6%.

02/08/2020:  After increasing the temperature to 85F, the gravity has only dropped to 1.053 SG and held there.  I'm debating what to do about this.  At this gravity, it's way too sweet to drink.  Bottling it introduces the risk of the yeast reactivating later and exploding the bottles.

02/09/2020:  Since the brew has been sitting on the yeast now for about three weeks, I decided that additional action is needed.  I transferred the brew off the yeast cake into a cleaned and sanitized fermenter.  This should prevent any autolysis.  Unfortunately, the gravity is still reading 1.053 SG.  I confirmed this with both a Tilt Hydrometer and a standard glass hydrometer (which both read the same figure).  Tasting the brew from the hydrometer tube proved to be very cloying, so I know that additional fermentation is needed.  I've had pretty good results with Coopers Ale Yeast in the past, being a fairly aggressive fermenter, so I decided to give it a shot.  I created a one liter starter with a can of Propper Starter with about 8 ounces of the existing brew included in it.  This was placed on a stir plate to ensure good oxygenation.  I'm hopeful that by tomorrow or Tuesday I'll have a nice healthy colony of Coopers Ale Yeast that I can pitch into the fermenter.  With any luck, that yeast (perhaps aided by glucoamylase if needed) will get the gravity down into a less-cloying range.

02/10/2020:  I added a few drops of glucoamylase to the fermenter and splashed in a little of the Coopers Ale Yeast starter while I waited on the yeast to settle out of it.  Later, once the yeast has settled out of suspension my plan will be to pitch the lot of it in the fermenter to see if we can get it to final gravity.  If that doesn't work, I may end up having to dump it.

Late in the day, I dumped the liquid off the 1L starter and swirled the yeast layer into suspension. This and a drop of glucoamylase were added to the fermenter.  Gravity has since started dropping, currently reading 1.048 SG, but this could be a result of the added liquid with the yeast.  For that reason, I am cautiously optimistic at this point that fermentation has restarted but uncertain that it has.

02/12/2020:  The enzyme and fresh yeast seem to have done the trick.  Gravity is down to 1.043 and still seems to be dropping. Before the yeast and enzyme addition, the top of the beer in the fermenter was clean.  All of the yeast had dropped out of suspension.  Tonight there is a half-inch layer of krausen atop it, suggesting that fermentation is going again.  Because we are now looking at a mix of three yeast strains potentially in the beer (the original wine yeast, barleywine yeast, and now Coopers Ale Yeast), I think it would be difficult to reproduce this one.

03/21/2020:  The brew is carbonated now.  When chilled and poured into a glass, it's an amber color with no real head but a nice medium level of carbonation.  For something at 13.6% ABV, it's very easy to drink.  It's mildly to moderately sweet, but not cloying.  It's frighteningly easy to drink given the alcohol content.  If I brew it again, though, I'd definitely include late-addition hops to the mix, to balance out the sweetness from the alcohol and residual sugar, and add some complexity. I might use Mandarina Bavaria, Hallertau Mittelfruh, or something with tart citrusy note.