April 26, 2020
Quite a few years ago, Dogfish Head founder Sam Calagione worked with Dr. Patrick (Pat) McGovern to re-create an ancient brew based on a chemical analysis of residue found in 9000-year-old pottery from the Jiahu region of China.  The analysis of that pottery showed a combination of residues from barley, honey, and rice, along with grape and/or hawthorn berry.  Using this information, Dogfish Head and "Dr. Pat" (as he's known to many people) created a beer they called Chateau Jiahu.

This was a beer I was very fond of from the first sip.  It has a flavor that immediately invokes a combination of sake (rice wine), beer, and mead, with a mild sweetness from the hawthorn berry.  It's incredibly easy to drink despite the higher ABV.

I brewed a batch of this a while back, and it turned out quite well.  For this batch, I'm swapping out the (4 pounds of) light or extra-light malt extract for some Pilsner malt.  This should reduce the cost and possibly bring the flavor closer to the Dogfish Head original.

Quick notes regarding my changes versus the published recipe:

04/26/2020:  The Pilsner malt used in the batch was a mix of about 3 pounds of Swaen Pilsner, 3-4 pounds of Dingeman's Belgian Pilsen, and the rest Weyermann's German Pilsner, for a total of 9 pounds.

About 45 minutes into the mash, I realized I had no rice syrup solids. The best I could do as a substitute was to quickly cook 4 pounds of long-grain rice on the stove and add them into the mash tun, giving the mash another 45 minutes to convert the rice.  How will this impact the finished beer? No idea.
In retrospect, although adding all this rice did allow me to reach my target gravity, I suspect that a large amount of the starch did not convert because the kernels remained intact.  If I was doing this again, I'd use a blender or similar tool to grind the cooked rice into a paste that would make the starch more accessible to the amylase enzyme.  (Actually, if I was doing it again, I would actually use the rice syrup solids, as that's a lot less work.)

I went looking for my Simcoe hops and discovered a one ounce package of Mandarina Bavaria hops at 10.1% Alpha Acid (AA).  A quick check in Brewfather revealed that adding this exact amount at 15 minutes from the end of the boil would hit my IBU target, and might result in the hop's mandarin orange flavors coming out, enhancing the beer (hopefully).  That seemed like a bit of synchronicity, so I went with it.

I used Lallemand Abbaye yeast for fermentation, pitched right from the package.  The yeast's optimal fermentation range is 63-77F, which is well within ambient temperatures in the basement.  I don't expect the temperature to go much about 68-69F during fermentation and won't bother using temperature control for this batch.

After transferring the wort to the kettle and dropping in the Tilt Hydrometer, I found that I had five gallons of wort at 1.084 SG.  That's exactly what Brewfather had calculated, but is a few points shy of the OG listed in Dr. Pat's book... not enough to stress over, though.

What I also found was that the hawthorn berry powder made a mess in the kettle and apparently scorched on the bottom.  If I was doing this recipe again, I think I'd try putting the powder in a fine mesh bag rather than in the kettle itself.

Removing the mess wasn't too terrible, but required soaking for a while with PBW followed by a bit of scraping and scrubbing.  It was bad enough that it tripped The Grainfather's scorch protection switch during cleaning, and I had to reset it.

As I write this at about 10:40pm on April 26, the Tilt Hydrometer reports a temperature of 65F within the fermenter and a gravity of 1.083 SG, which occasionally blips at 1.084 SG.

04/27/2020 (Day 1):  It's now about 13 hours since yeast pitch.  The temperature of the beer has held at 65F and the gravity continues to read 1.083 SG.  I suspect that will change in the next few hours once the yeast begins fermenting in earnest.

04/28/2020 (Day 2):  Gravity still reads 1.083 SG with an occasional blip of 1.082 SG, which suggests that fermentation might be starting, finally.  (Update 12:25pm:  There was absolutely no indication of live yeast or yeast activity in the fermenter, which I am not surprised by when I saw the packet had expired in 2018 without my realizing it.  I pitched a fresh, good packet of SafBrew T-58 to replace it.)

05/01/2020 (Day 5):  Gravity is now 1.027 SG and the temp has been holding at 66F, so it appears that fermentation is slowing down now.  We're still about 13 points from the expected final gravity, so hopefully the ice pack yesterday didn't make the yeast go dormant. 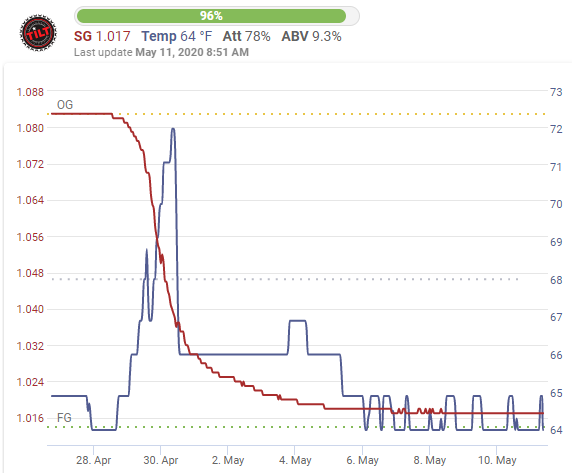 05/12/2020 (Day 16):  Gravity has held at 1.017 for about 4 days now with no indication that it's dropping further.  Odds are good that I'll be bottling this one Saturday or Sunday.
05/14/2020 (Day 18):  Gravity and temp have continued to hold for about 6 days at this point, so unless things change today or Friday, I'll be bottling it this weekend.
05/23/2020 (Day 27):  Gravity has held at 1.017 for a couple of weeks. My wife and I bottled the beer today. Yield was 12 bomber bottles (22oz.) and 24 standard 12-ounce bottles.  A taste of the beer from the fermenter was just about perfect.  The aroma was fruity and floral. The mouthfeel was medium to light bodied. There was just a touch of warming alcohol.  The flavor was a nice mix of mead, sake, and beer, being not too much of any one of those, and extremely tasty.  Priming sugar was added to deliver a medium level of carbonation (4 Brewer's Best tablets per 12-ounce, 8 per 22 ounce).