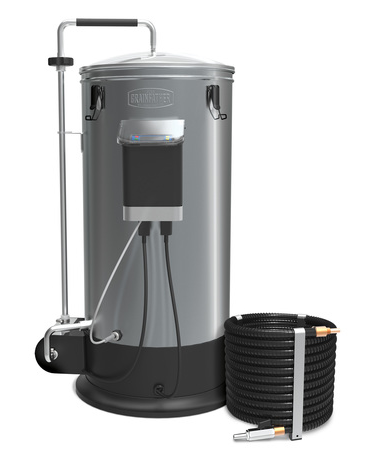 Yesterday I received my first copy of Brew Your Own magazine.  In it I saw an ad for something called The Grainfather.  Currently listed on Kickstarter to obtain crowdfunding for a U.S. launch of the product, The Grainfather (pictured at the left) is an all-in-one system for home brewing.

I read some reviews of the product and found a copy of its instruction manual online.  It looks like it makes all-grain brewing a lot simpler and easier.

In the device, you can mash your grain bill, sparge it, boil the wort, chill it to yeast pitching temperature with the counterflow chiller pictured next to it (looks like a big hose), and pump it into your fermenter.  The only thing not included is the fermenter and a place to hold/heat your sparge water... but if you have an existing brew kettle you can use The Grainfather to boil a batch of sparge water and use the built-in pumps to pump it into a kettle or stainless steel fermenter to cool down to sparge temperature while mashing the grain in The Grainfather.

When the mash is finished, you lift the grain basket carefully up out of the wort and lock it into place in clips inside the kettle.  Then you sparge the grain using the water you prepared earlier.  When you're finished sparging, you unlock and remove the grain basket and can easily dump the grain.

Next, you set The Grainfather to boiling and boil your wort, adding hops and other ingredients as appropriate.  When the boil is finished, you switch off the heating element, attach the counterflow wort chiller to The Grainfather and a source of cold water, then start the pump.

The Grainfather then pumps the finished wort through the counterflow chiller into your fermenter, where it should be ready (or nearly ready) to pitch yeast into.

At first glance, The Grainfather seems expensive at around $1,000.  But you have to consider for this price that you're getting an 8-gallon brew kettle (often around $200), a 2000W heating element, a grain basket, recirculating pump (around $150 I think), counterflow chiller ($70+), and an electronic temperature controller.  You could probably build something like it yourself, assuming you had the skills and tools, but you wouldn't have the support of a company that's been selling and servicing their products for years (outside the US).

I'm not sure of the legality of this in Ohio, but there is also a distilling attachment made of copper that can be added to The Grainfather to make it possible to distill alcohol in the device.  Before you do something like that, you'll want to check with legal experts to determine whether that's allowed.

Although I have all the equipment necessary to brew 5-gallon batches at home, I'm giving some serious thought to purchasing one of these through the Kickstarter.  It would make the mashing, sparging, and cooling processes much easier and more reliable than what I do today.

Reviews of the product say that it's not perfect, but it's easy to use and has a pretty high efficiency (75-82% according to reviewers).  They say the wort it produces tends to be very clear.  It doesn't seem to get bogged down with large grain/hops loads, and saves time relative to other methods that don't involve a high-end computer-controlled brewing system (that costs $2500+).

Update August 7, 2015:  I've received the Grainfather and assembled it.  Here are my initial impressions of the product.

Update August 16, 2015:  Here are the results of my initial (non-brewing) test run of the Grainfather, to check for leaks, clean the unit, and determine mash/steep/boil times.

Other Grainfather posts on this site: