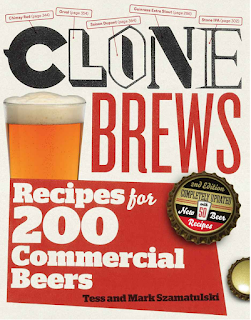 I suspect that most home brewers are drawn to the hobby when they taste a craft beer and wonder how it was made, or how it might taste if the recipe was altered slightly.  This kind of curiosity drives us to seek out recipes that come as close as possible to our favorite craft beers, so that we can reproduce or improve upon that brew.  Clone Brews by Tess and Mark Szamatulski is an excellent resource in that quest.  They run a home brew shop and spent many hours working out recipes to clone 200 of their favorite beers, sharing those recipes in this book.

Being a fan of Belgian and Belgian-style ales, I was particularly impressed with that section of the book.  In it, I found recipes for clones of many classic Belgian beers, including Hitachino Nest White Ale, Affligem Abbey Tripel, Scaldis Noel, Chimay Red, Duvel, Gulden Draak, Unibroue La Fin Du Monde, Orval, Trappist Rochefort 8, and St. Bernardus Prior 8.

The book begins with a discussion of how you might go about cloning a beer that isn't covered in the book.  It talks about information sources that will help you nail down some of the ingredients in the beer.

For each recipe, the authors provide a description of the beer being cloned, followed by specifications for the beer (including its style, the recipe yield, original gravity, final gravity, IBUs, SRM, and ABV), serving notes and food pairing ideas, and brewing instructions.

Brewing instructions include the ingredient list and amounts, times and temperatures, and all the details you'd need to brew the beer yourself.  Recipes for all-grain, mini-mash, and extract brewing techniques are included as well.  Most of the recipes are simple to follow, much like those in common ingredient kits.  A few require the use of more-advanced techniques like roasting your own grain, caramelizing or reducing part of the wort, and so on.

For example, the following is their recipe for a Chimay Red clone:


So far, I've only brewed two of the recipes from the book.  My first was the Gulden Draak recipe, which turned out quite well.  I wouldn't say it's an exact match for the original, but then I wasn't able to get exactly the right malt for one of the malts and couldn't get one of the hops listed in the recipe.  That may have made the difference.

The other recipe I brewed was the Bush de Noel (Scaldis Noel) clone.  That beer requires at least seven months of bottle conditioning before it's ready, so I won't know until later this year how it turned out.


I'm looking forward to trying some of the other recipes in the book, such as La Fin Du Monde.  Watch this blog for the results of those experiments.