November 01, 2015
Adventures in Homebrewing makes a number of all-grain and extract recipe kits for homebrewing.  During a sale earlier this year, I picked up their Peanut Butter Conspiracy Stout extract kit (on sale for $26.99 as of this writing in November 2015).  The kit includes:

The brewing process was:
AIH's instruction sheet said that my wort should have an Original Gravity of 1.045, a final gravity of 1.012, and an ABV of 4.6%.  My pre-boil gravity was 1.047 SG, but the volume was a little low, so I topped it off with water to hit the right volume.  Post-boil gravity measured with a refractometer was again 11 Brix or 1.047.  My stout would be slightly stronger than designed.

I have to say... if you like chocolate this is a great beer to brew.  The malt combination here gives off a delicious dark chocolate aroma as the beer boils.  The minimal bitterness (estimated 18 IBUs) means that there isn't a strong hops aroma in the boil, either.

Yield was estimated at 5 gallons for the recipe.  I would up with 4.7 gallons in my fermenter at the time I pitched the yeast.

Because I don't have a fermentation chamber yet, the plastic bucket fermenter was placed in my basement, which maintains a 68F temperature pretty much year-round.

Fermentation didn't seem particularly vigorous.  I checked it a few hours after pitching the yeast and saw nothing happening in the airlock.  A day later, still no visible activity.  Finally, after seeing no airlock activity for two days, I popped open the fermenter lid to see a nice healthy krausen.  The fermentation was going fine and I was just too impatient.  I sealed the lid and left it alone after that.

I took small samples of the wort over the next week or so and watched the gravity gradually decline.  When it seemed to level out, primary fermentation was finished.  This happened on approximately Day X of the fermentation.

The AIH instructions say that the peanut butter flavoring should be added after the beer completes primary fermentation in about two weeks, then let it spend at least a week in secondary.  Since I don't rack off my beer to a secondary, I added the flavoring at the two-week mark and left the beer in the fermenter another week.

I bottled the beer in sanitized, recycled craft beer bottles.  I did only two 22-ounce bombers of this one, figuring that it's probably the kind of beer you won't want to drink a lot of at one sitting.  The beer had a definite peanut butter aroma.  A sample I used for measuring the final gravity 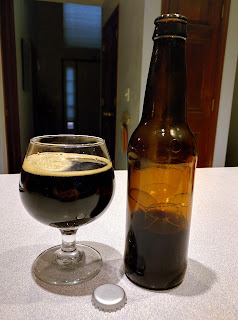 The beer pours a perfect dark brown stout color.  The aroma has a strong peanut butter element, with some roasted malt, chocolate, and coffee behind that.  The flavor is predominantly roasted grain, coffee, and a little chocolate. The peanut butter in the flavor seems fairly subdued. Although stouts aren't overly carbonated, I think this one could do with a little carbonation.

It feels a little watery compared to a couple of stouts I've had recently from local craft breweries.  One of those was a nitro stout, so that's not an entirely fair comparison.  I would consider adding something to give this a little more body if I was going to make it again.

AIH rates this an easy kit, and I can't argue with them.  Steep the grains, add the extract, bring to a boil, add the hops, wait a bit, chill it down, pitch the yeast, ferment for a while, add the peanut butter flavoring, wait a week, and bottle. Not too tough if you've been brewing a while.

In terms of the brewing process on this one, the only part that was kind of a nuisance was dealing with the extract - but that's only because I wanted to do the boil in The Grainfather so that I could leverage its fast counterflow wort chiller at the end.  I don't plan to make a habit of using the Grainfather in this way as it's not really designed for it, and I'm planning to go all-grain as soon as I use up my remaining extract kits.  Dissolving the extract in another pot and transferring it to the Grainfather for the boil worked as a solution for dealing with extract and not triggering the Grainfather's scorch protection.

If I was going to make this beer again, I'd start with the all-grain kit instead of the extract. At the time I bought this one, I didn't have the equipment for an all-grain brew.  I would also add some oatmeal or something to improve the body, and perhaps some powdered peanut butter to enhance the peanut butter flavor (the aroma of peanut butter is perfect in this one, but the flavor is hard to detect).