November 22, 2015
Back in late July, I made an extract-based Belgian Single using a recipe from E.C. Kraus.  The beer turned out to be one of the better ones I've made, and we've gone through (and given away) almost all of it, so I decided to try brewing a second batch.

In my notes from the original version, I noted that I would dial the hops back slightly and add some sugar to dry out a little of the sweetness.  Here is the updated version 1.1 recipe:

The changes made in this version versus the previous:
Reducing the hops amounts meant that I was going from a calculated 28.8 IBUs down to 21.1 IBUs.  The original beer had a gravity of 61, so its BU:GU ratio was 28.8/61 or 0.47.  The new recipe has an estimated original gravity of 53, so its BU:GU would be 21.1/53 or 0.40.  That's a pretty significant drop but my suspicion is that the Wyeast product might ferment out more of the sugar as I plan to give it more time in the fermenter than I gave the Safbrew Abbaye and will be oxygenating it to help it along.  I'm also using temperature control on the fermenter to keep the yeast at the upper end of its temperature range, which may dry the beer out more and increase ester production.

Following is the brewing process for this beer:
Now it was up to the yeast.

My primary fermenter for this batch was an SS Brew Tech Brewmaster Bucket.  This is a stainless steel conical fermentation bucket that I recently acquired and think is one of the best pieces of brewing equipment I own.

In the version 1.0 beer, I got a bit more carbonation than I expected and the beer was a little sweeter than I thought it should be.  For that reason, I decided to keep the fermenter at the upper end of the range for the first two weeks of fermentation, then remove the temperature control and allow it to spend an additional week at the basement's ambient temperature of 68F. 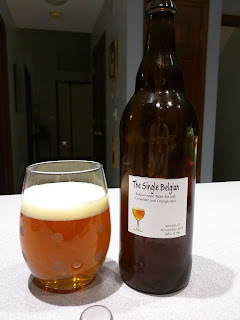 At the left, you see a glass of the finished beer.  It turned out only very slightly hazy, with a finger-thick white head that lasted several seconds before reincorporating into the beer.

The carbonation level was good, not overly bubbly or particularly flat.  The use of bottle conditioning yeast and fermentation drops seems to have worked well.

The aroma is malty but not sweet, and slightly fruity.

Compared with version 1.0, it's much less sweet and the bitterness from the hops is well-balanced against the malt.  I wondered if the coriander would be an obvious element of the flavor, but it's barely detectable, which is what I'd hoped to accomplish.  The sweet orange peel doesn't come through, however.  There is a roasty element to the flavor, probably from the aromatic malt.

Had this come from a micro brewery in town, I'd have rated it an 8 out of 10, so I am very happy with it.  It's a very easy to drink beer, with a little complexity in the flavor and no serious flaws.

If I was to brew this beer again, here are changes I think I might make:


All this being said, I'm very happy with how this turned out and I think it's a definite improvement over the original version 1.0.