As a fan of Belgian style ales, I've long wanted to try Westvleteren XII.  It's considered to be one of the very best of the Belgian abbey ales, and by most accounts deservedly so.  Unfortunately, it's not offered for sale very often in the US.  Northern Brewer's Northy 12 Belgian Quad is reportedly a close approximation of Westvleteren XII.  I purchased the kit recently and decided to brew it.

Northern Brewer's kits ship as a collection of loose components in bags inside a box.  I'd ordered the kit with some other items, so separating out the components of the kit from the other items in my order took a few minutes of careful examination to make sure I had it all, and wasn't accidentally slipping the wrong thing into my Northy XII ingredients.

The ingredients in the kit include:

The recipe begins with a Saccharine rest at 149F for 60 minutes, followed by a mash out at 168F for 10 minutes.

Once the boil begins, the Brewer's Gold pellets are added first, followed by Hallertau at 30 minutes left.  Styrian Goldings and the Candi Syrup are added with 15 minutes left in the boil.

The wort should then be chilled to an appropriate temperature for the yeast, 64F-72F would work for any of the recommended yeasts.

The beer should hit an original gravity of 1.090.  It should spend 2 weeks in the primary fermenter and 3 months in the secondary, followed by two weeks of bottle conditioning.

Compared to some of the kits I've made, it's relatively simple.

As this was an all-grain brew, I used my Grainfather RIMS system to do the brewing.  I calculated the recommended amount of mash water, then filled the kettle with distilled water.  To this, I added a packet of Accumash water treatment designed to match the beer.  (It came free with the kit at the time I ordered it.)  I'd never used Accumash before, but it's very easy to work with.

I got the water to 149F and began slowly adding the grain, stirring to make sure it all got wet and didn't clump up.  When all 16 pounds were added, the Grainfather's grain basket was relatively full (it's designed to hold 20 pounds maximum, so this was pushing toward its limits).  I got the lid in place over the grain and started the recirculating pump.  A few minutes later, I checked back and the temperature had dropped to 125F.  Apparently the grain contained enough dust or particulate matter that it fell through the basket and onto the bottom of the Grainfather's kettle.  This caused the thermal cut-out switch (designed for scorch protection) to trip.  Repeated attempts to reset the switch failed.  I was eventually forced to lift the grain basket out and set it in a clean steel kettle. Using by brewing spoon (and eventually my hand) I managed to get enough of the sediment off the area of the Grainfather's kettle where the heating element is located.  I could then get the mash water back up to the desired temperature of 149F and reintroduce the grain.  This left a mess on the floor and side of the Grainfather kettle that I had to clean up.  This extended "mash process" took about four hours from beginning to end.


Because of the issues with particulate matter during the mash, the grain spent around two hours in the 125F range, and a while below that as I cleaned up the kettle.  Once the particulate matter was dealt with, the mash did spend 60 minutes at 149F and 10 at 168F.


With the mash completed, I began the boil.  Fortunately, my earlier cleanup efforts did the trick and the thermal cut-out switch didn't trigger again for the rest of the brewing session.

From here on, the brewing process was pretty much "textbook".  I completed the 60-minute boil, recirculated wort through the counter flow chiller into the kettle until the kettle temperature dropped to 140F, then pumped it into my fermenter where it arrived at 72F and ready for the yeast.

My original gravity wound up pretty low.  The recipe called for a 5-gallon batch at 1.090.  My hops bags had dropped to the bottom of the kettle during the boil.  At the 60-minute mark, I had almost six gallons of wort at 1.061.  I would have boiled it down to 5 gallons to get the gravity up, but decided not to because I didn't want it turning out too bitter.  I'd rather have a weaker beer I can drink than a stronger one that's too bitter, so I opted to ferment what I had.  (Update:  Since this brew I've learned that I was using the wrong sparge water calculation and probably needed to extend the mash time.  Since making those process changes, I've had much better results.)

At the start of my brew day, I smacked a very fresh pack of Wyeast 3787 Trappist High Gravity ale yeast.  By the time the beer was in the fermenter, the yeast pack had expanded considerably and was ready to pitch.  I took an original gravity reading and volume measurement from the markings in my fermenter, then pitched the yeast.

This was my first experience with Wyeast 3787.  For the first 24 hours, I saw very little activity in the airlock.  In day 2, wort had made its way into the airlock on the fermenter.  On day 3, the airlock was a milky tan color from the wort passing through it, and the holes in the lid of the fermenter were filled with wort.  I quickly sanitized a new lid and blow-off tube, and set up a bucket of Star San.  I was glad I did.  The next time I checked on the fermenter, there was blow-off all through the tube.  Needless to say, I think the yeast was happy...

As I write this and post it on December 3, 2015, the beer is finishing up primary fermentation.  Although the recipe calls for racking the beer to a secondary, my experience has been that I can't tell a difference in the beer when it's not racked to secondary, so I'm planning to leave it in the primary for the full three months.

Update on 12/20/2015:  The beer has been in a plastic fermenter (because my stainless was busy) for about a month.  Concerned about possible autolysis and off-flavors from remaining so long in the plastic bucket, I sanitized by Chapman SteelTank fermenter and transferred the beer to there.  I'm planning to let it condition in that fermenter until it's ready to bottle.

The beer pours a nearly black color with finger thick head that lasts a minute or so and then reincorporates into the beer. 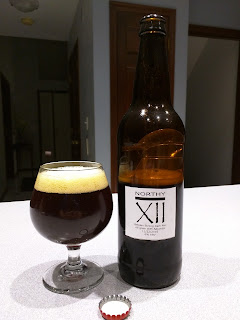 Reviews of the real Westvleteren XII describe it as having a good balance between sweetness and hops bitterness.  Reviewers describe flavors like dark fruit, raisin, brown sugar, banana, and clove.

The flavor of this beer starts with a mix of hops bitterness, a hint of coffee, and a hint of dark fruit. Probably because of the mash issues, the beer is pretty dry.  There is virtually no sweetness to this one.  Unfortunately, there is also a fairly pronounced tannin presence.  Most likely this means that my sparge water was too hot, or that I used too much of it (or both).  The tannin element gives the beer a drying quality that I don't care for.

Despite the fact that things simply didn't turn out well on this one, it's not a complete loss.  It's definitely not the best beer I've ever made, but it's not one I need to throw out, either.  It's one that I'll keep around and drink occasionally until it's gone.  Is it the Westvleteren clone I was hoping for? Sadly, no.  Would I make the kit again?  Possibly, though there are some other Westvleteren clone recipes I want to try first.  Would I buy another Northern Brewer kit?  Of course.  My failure to brew this properly wasn't their fault or their kit's fault.

Changing from an extract brewing process on my kitchen stove to an all-grain brewing process with The Grainfather was a lot to change at once.  I had issues of varying impact on each batch, with the most common one being what I experienced here - a beer that was well below the recipe gravity and well above the final volume.

Since brewing this batch, I've learned that I was calculating sparge water incorrectly for The Grainfather.  I've also learned that it's a good idea to calculate the "quarts per pound" ratio of mash water to grain.  If it's much above 1.5, I need to extend the mash time to compensate for the thinner mash.  The last batch I made used the correct sparge calculation and an extended mash time.  It came out on target for both volume and gravity.  If I do this beer again, I'll fix that.

Another problem I had with this batch was that once I realized I needed to increase the gravity by boiling down the wort, I couldn't.  I'd used muslin bags for my hops, which dropped to the bottom of the kettle where I was unable to retrieve them.  If I'd extended the boil for another 30-60 minutes to help reduce the volume and increase the gravity, I'd have made the beer a lot more bitter.  I'm not a fan of overly bitter beers.  Since brewing this beer, I've purchased a hop spider from iMake so that if I happen to miss my gravity or volume mark again, I can pull the hops out and continue the boil until I'm closer to the target.

If I were to brew this again, here are the things I'd do differently:

Posted by Michael Salsbury at 12:50 AM