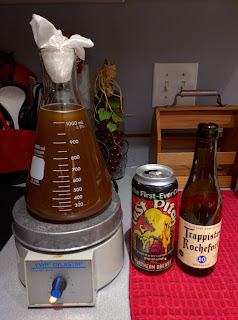 Recently, I started inventorying my brewing ingredients.  In the process, I realized that I had ordered everything needed to make a Trappistes Rochefort 10 clone recipe I'd seen a while ago.  I just didn't have the yeast.  Then I remembered that I'd bought a few cans of Fast Pitch a while ago and hadn't used them.  I also had a bottle of Rochefort 10 in the fridge.  Time to grow my own yeast!

I sanitized my one-liter flask and magnetic stirring bar.  I sprayed Star San on the bottle of beer, the opener, and the lid of the Fast Pitch can and let them soak a little.  Then I poured Fast Pitch into the flask and enough distilled water to hit the 1L mark.  I opened the bottle of Rochefort 10, poured most of it into a glass for my own enjoyment, and left about a quarter-inch in the bottle.  This leftover part I swirled vigorously until I could see no more yeast sediment in the bottom of the bottle.  I tipped this "slurry" into the flask of Fast Pitch.

To allow the starter to breathe, I stuffed paper towel into the top and did my best to ensure that it sealed the flask without blocking airflow completely.

I turned on the stirrer and let it work.

I've heard stories in years past that you "can't" culture yeast from a bottle shipped from Belgium. The theory goes that the yeast has been dormant too long and just doesn't have enough viable cells to culture.  That certainly makes sense.

On the other hand, a while ago I decided to brew a Gulden Draak clone and thought it would be good to use the actual yeast to do it.  In that case, I had the yeast sediment from four bottles of the beer to work with.  I was able to culture enough yeast through a three-stage starter to get my beer brewed. While it wasn't a perfect clone of Gulden Draak, it was a very good beer and shared many of the same characteristics.  So, I know it can be done.  Will it work with a can of Fast Pitch and the dregs from a single bottle of Rochefort?  We'll see.

A fair question to ask at this point is "Why culture up Rochefort yeast like this when you can buy White Labs' WLP530, which is basically the same thing?"  The answer to that is simple.  First and most importantly, it's an excuse to try Fast Pitch and write about it.  Secondly, I'm on-call for work and I tend not to stray far from home those weeks, so I could get my yeast without leaving home.

If you want to learn more about yeast starters, there is a good article on Beer and Wine Journal about doing it.  According to the article, I've violated one of their rules by pitching into a large starter. Well, it worked before...

March 13 9:30pm:  Dregs from Rochefort are pitched into the starter and the stirrer set in motion.

March 14 6:00pm:  I switched the stirrer off before going to work since it felt a little warm.  When I came home, there was a nice thin layer of yeast in the bottom of the 1L flask, so I created a 64-ounce Fast Pitch starter and moved the yeast to a 1-gallon jar. I left the stirrer on overnight and turned it off the next morning.

March 15 6:00pm:  There's a nice thick layer of yeast in the bottom of the gallon jar now.  The wort still smells pretty sugary, so I decided to leave it going for another day.  I turned on the stirrer and let it run while I slept.

I wound up using three cans of Fast Pitch to grow a nice colony of yeast from the Rochefort bottle.  That works out to around $7.50.  Certainly, a bottle of White Labs WLP530 (purportedly the same yeast strain) would have been cheaper and faster.  However, I wouldn't have the satisfaction of having brewed a Rochefort 10 clone with actual Rochefort yeast.

I've also seen people suggest that using Malta Goya (a malt-based soft drink available in many supermarkets) would be just as effective and possibly cheaper than using Fast Pitch.  It is worth noting that Malta Goya contains a lot of simple sugars which a forum discussion on Beer Advocate advised against using in a starter.  A similar product called Malta Polar is also suggested as a starter wort because it lacks some of the sugars found in Malta Goya.  I haven't tried either product, but I might someday out of curiosity.

If I was creating a wort that used a lot of adjuncts, like a Belgian Tripel, I might consider using one of the malt soft drink products (Malta Goya or Malta Polar) as a starter wort material.  I don't know that this would be any cheaper or better than Fast Pitch... so I'll probably only bother to do that if I run out of Fast Pitch and happen to stumble across one of the Malta products.

Fast Pitch is probably a bit more expensive than mixing up your own wort from DME/LME and a few hops pellets.  However, that also means boiling water, measuring, chilling, etc.  This can take quite a while.  In this case, using fresh distilled water and Fast Pitch, combined with a magnetic stirrer and stir plate, enabled me to get the yeast starter working within about 2-3 minutes of opening the bottle of Rochefort 10.  Given how little time I have available for brewing, that time savings and convenience is worth the extra couple of minutes and dollar or two.  Your circumstances may vary.