March 13, 2016
I've probably ordered brewing supplies from most of the more well-known shops on the Internet, and I've bought products from all the local homebrew shops as well.  I've gotten kits from several places and ordered individual ingredients to make several more recipes.  Until this week, I hadn't tried any kits from Great Fermentations.  After reading that their Tripppel End kit is "reminiscent of Unibroue's La Fin Du Monde" (one of my favorite Tripel style beers), I ordered it.  I received a discount through a sale they were having at the time, but the kit's normal price is $39.99 in all-grain format.

The kit arrives as a plastic bag containing the grains, which are pre-measured and crushed.  With the bag of grains comes a set of instructions and four ounces of hops.  I looked at that and thought, "Either these are weak hops or this is a lot more bitter than La Fin Du Monde..."

I plugged the recipe into both BeerSmith 2 and BeerTools Pro.  Both pegged the recipe at over twice the bitterness of an actual La Fin Du Monde (35-55 IBUs vs. La Fin Du Monde's 19 IBUs).  Once again, I decided I needed to modify the kit in order to get a beer I'd be happy to drink.  I don't know why so many brewers think that if a beer is good "as is" that it'll be even better if you hop the daylights out of it.  (It won't be, at least for those of us who don't enjoy hoppy styles.)

Below is my modified version of Great Fermentations' recipe:
My modified recipe drops the IBUs to 21.9, which is closer to Unibroue's 19.

It's worth noting that my yeast packages were both past their prime.

Here are my modified brewing instructions:
My pre-boil gravity came out at 62 instead of the expected 75, but my volume was also above the estimated 6.27 gallons in BeerSmith.

At end end of the boil, chill the wort to 64-72F using the counter flow chiller and pump into the fermenter.  Oxygenate for 60 seconds with pure oxygen.

Their web site says that the beer "shows promise a month after brewing but really shines after 45-60 days in the bottle."

I fermented the beer in a plastic bucket primary fermenter for three weeks.  My basement's ambient temperature is 64-65F, and it seems to have kept the beer close to the target range without my having to apply heat or cooling.

Since tripels aren't typically very bright clear beers, I chose not to transfer it to a secondary.  I bottled it three weeks after pitching, using CBC-1 bottle conditioning yeast and carbonation drops for priming sugar.  Yield was a 64-ounce growler (which was force carbonated) and 34 bottles.  Approximately 12 of the bottles were 22-ounce and the other 22 were 12-ounce.

The folks at Great Fermentations apparently mill their grains perfectly for The Grainfather.  I've never had a mash and sparge go so smoothly with The Grainfather.  It saved me quite a bit of brewing time, especially when combined with The Graincoat accessory that helped the device heat water and wort much faster.  I'll definitely consider ordering more from these folks.

I could have sworn I read in the instructions that I should add the candi sugar at the start of the boil, but later realized that this was for a different Tripel recipe I was looking at.  Lesson learned here is to make sure you read and re-read the instruction sheet (for the kit you're using).

I also learned after transferring this batch to the fermenter that I have been doing something wrong with The Grainfather from the beginning.  I've been using a sparge water calculation intended for a six-gallon batch when creating a five-gallon batch.  I've also not allowed the grain to mash for longer than 60 minutes, which may be why I had such a low gravity.  I'll adjust this in future batches.  In addition, I've learned that The Grainfather's mash formula is often on the thinner end, which warrants doing a longer mash to ensure full conversion. 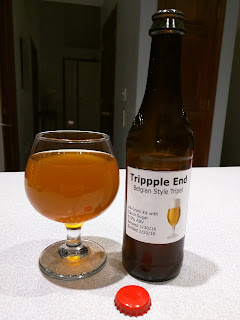 The beer came out a bit more amber than yellow or gold, which isn't quite in keeping with the Tripels I've had from Belgium.  On the other hand, putting the candi sugar in at the start of the boil may have contributed to that.  It's relatively clear but there is some haze to it.  As you can see in the image at the left, although it did carbonate somewhat, carbonation is minimal and what little head there is doesn't last long or leave any lacing.  This is a problem I've had with a lot of my Belgian-style beers.  I think it tends to be a problem when I use carbonation drops instead of priming sugar to prime the beer before bottling.

The aroma of the beer is a fruity and slightly sweet.  In this respect, it's exactly like other tripels I've had and enjoyed.

The flavor is very slightly sweet, with some orange and orange peel to it (despite none being added), and with a hint of roasted grain at the very end.  The hops balance, to my taste, is ideal.  There is enough bitterness to keep it from being cloying, but not so much that it tastes like a hop-forward tripel.

I'm very glad that I cut the hops bill in half on this beer.  With half the provided hops, the beer is more like Unibroue's La Fin Du Monde than I suspect it would have been with the full hops load.  If you're not a fan of hop-forward beers, it's a good idea to invest in Beer Tools Pro or BeerSmith (or even the free QBrew) software to double-check the recipes you use.  It seems that a lot of recipes were created by folks who love to generously hop every beer they brew, even if that makes the beer more like an IPA and less like the style it's purported to be.  If that's your thing, I've got no problem with it.  But I prefer my beers to be more balanced or malt-forward than hop-forward.

I will probably brew this beer again.  Even with the mashing issues, it has a nice flavor, a good fruity Belgian yeast character, and isn't too dry or too bitter.  It's one of the better Tripels I've made.