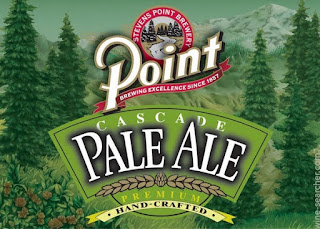 A good friend of mine loves Stevens Point Brewery of Wisconsin's Cascade Pale Ale.  He was dismayed to learn that it's no longer being made, and asked if I might be able to brew something like it.  Having not done many pale ales, I thought it might be an interesting challenge.

When attempting to clone a beer, the first step is to research the available data on the original beer.  Buying and trying a few is a good start, but with this beer off the store shelves that wasn't an option.

The brewery's description of the beer at some point (it's no longer listed) said:

The above, and other research on the Internet, tells me the following:

What I don't have good data for is color.  The available photos online vary from a gold color to a slightly coppery IPA-like color.  Some photos look more like an SRM color around 11-13. but most look more like 5-7.  Since many reviews describe it as a gold color, I'm going to aim for something in the ballpark of SRM 6.

Beer Advocate reviewers noted the following characteristics:
As a long shot, I reached out to the brewery through its web site.  I told them that since they seemed to be discontinuing a good friend's favorite beer, maybe they'd be willing to share the recipe with a fellow brewer - or tell me where my "best guess" recipe is off.  If they respond, I'll be back to adjust the article and recipe accordingly.  Since BYO magazine often prints clone recipes based on data from commercial breweries, I asked them to see if they could get a recipe also.  As of this writing, the brewery has not responded and the magazine says they'll pass the request on but can't promise anything.

Based on the available data, I made a best guess at the following recipe for a 5-gallon batch:
My plan was to start with a protein rest at 131F to possibly clarify the beer a little, then perform the main mash at 153F for 90 minutes, followed by a 10-minute mash-out at 167F.

According to BeerSmith, this should yield a beer with the following characteristics:
This all sounds pretty close to the real beer... but only my friend will be able to say for sure.

July 24, 2016 was brew day.  I assembled the ingredients and crushed the grains.  I heated 4 gallons of mash water in The Grainfather to 131F, then added the grains.  After 10 minutes at 131F, I changed the mash temperature to 153F.  I left the mash recirculating longer than intended, 105 minutes in all.  Temperature seemed to vary between 151F and 158F because I didn't set The Grainfather's Mash/Normal switch to Mash.  A 30-minute mash-out at 167F was then performed.

After mash-out, the grain was sparged with 3.25 gallons of water at 168F and allowed to drain well.  As the last of the sparge water drained through the grain bed, I raised the kettle temperature to 190F.

After the sparge, the pre-boil gravity read 11.6 Brix on my refractometer and kettle volume was 6 gallons.

I added first wort hops before the kettle got to boiling.  Hops were added again at the 15-minute mark for flavor and at the 5-minute mark for aroma.  A whirlfloc tablet went in at 15 minutes.

After the boil, the hops bags for the first wort and 15-minute hops were removed.  The 5-minute addition bag was allowed to remain.

The wort was pumped into a pre-sanitized fermenter.  It reached an approximate temperature of 80.5F after passing through The Grainfather's counter flow chiller.  Between the half-gallon lost in The Grainfather to trub and the shrinkage due to cooling, fermenter volume was approximately 4.75 gallons.  Original gravity was 14 Brix or approximately 1.057 SG.  This was a little higher than my target of 1.054 but I decided to let it go.

The wort left the counter flow chiller at 80.5F.  When my cooling system got the wort down to 70F, I pitched the yeast and a vial of White Labs Clarity Ferm to further try to clarify the beer as it ferments.

I'm planning to add an ounce of Cascade for dry-hopping on August 4 and bottle on August 7 or 8.  Since this is a low-gravity beer, I'm not worried about carbonation issues due to dead yeast, so I'll only prime the batch with corn sugar (no champagne yeast as I do with higher-gravity beers).

July 28: I tasted a sample of the beer to get an idea of how it's coming along. It's light in color, lighter than I expected. It's bit thinner in body, and a bit more dry than I expected as well, possibly due to the extended mash time. The bitterness of the Cascade hops came through well, though not being an expert on the style I can't tell if I captured the flavor of Cascade well enough. Hopefully dry hopping will bring more of it out.

I'll be back to update this after I have news. 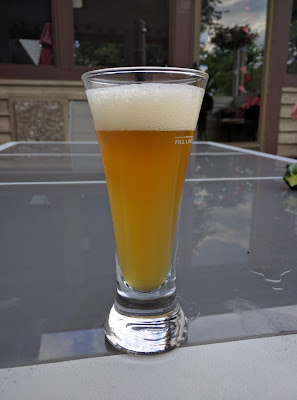 The beer went into bottles on August 6, 2016. On August 12 and 13, I placed bottles in the refrigerator to see how the carbonation was coming along.

The beer isn't as clear as I'd hoped, despite having used Whirlfloc during the boil and White Labs Clarity Ferm during fermentation. Still, it's clearer than the photo at left would indicate.

At left, you see a glass of the actual beer. It has a nice gold color with a hint of orange. The head is foamy and lasts a little while. Aroma is a little fruity with hints of the hops, but not as hoppy as I expected for a dry-hopped ale. Next time I'll have to increase the dry hop amount to see if that helps.

The first wort hops definitely have a less intense bitterness than expected in most pale ales. I might want to do a small amount of extra hops at the start of the boil next time.

Trying to be objective here, as a first attempt at producing any pale ale, I think I did OK. It could definitely benefit from more hops in the aroma and probably a larger flavor addition. I would imagine that some pale ale fans might find this under-hopped and not like it.

Because I don't have the real beer available to compare side-by-side with this version, I can't tell you how close (or far away) this attempted clone is. My friend has offered a bottle or two of the real thing so that I can try to dial in the recipe, and I'll take him up on that soon.