July 31, 2016
I bought a Wil Wheaton Wootstout extract kit from Northern Brewer quite a while ago... so long ago, in fact, that I won't be surprised if this thing is undrinkable when it's finished.  I read the instructions and they seemed so involved at the time that I wasn't comfortable brewing it.  Well, today I had the urge to brew and not a lot of time, which is the perfect scenario to brew an extract beer.

I opened the kit and learned that the Simplicity Candi Syrup in the kit was one of a batch I'd read about recently that wasn't inverted properly and turned into a rock in the container. I set it aside and pulled out a fresh one from a recent purchase.

The hops, when extracted from their sealed pouches, smelled fine. No indication of spoilage or soapy aroma to them.

There's a risk that the malt extract has gone stale, but I'm going to roll the dice and make the beer anyway.  I'll be using The Grainfather for this since it's convenient and already setup in the basement.

Since this is an extract recipe, there's a steeping step in place of the mash. I put 2.5 gallons of water in the The Grainfather's kettle, inserted the basket, and waited for it to heat to 152F. Once at temperature, I added the grain packet and turned on the recirculation pump to improve extract efficiency during the steep.  I put the pecans in a muslin bag and added them to the steep.  At the end of the steep, the grains were discarded but the pecans reserved for future use.

Enough water was added to the kettle to achieve 4 gallons of volume.  The wort was heated to boiling and I began stirring it with a spoon. As the wort swirled around the kettle, the Golden Light DME, Wheat DME, Gold DME, and Simplicity Syrup were added and the contents of the kettle stirred for a bit longer to avoid having extract accumulate on the bottom of the kettle and trip the thermal cut-off switch.

The wort was brought back to a boil.  A 90-minute boil began, with additions at the following times:


Original gravity was 26.2 Brix or 1.112 Standard Gravity, which is almost exactly what BeerSmith predicted. Final volume in the kettle was just under 5 gallons and volume in the fermenter was approximately 4.5 gallons. I decided not to let the pump suck up too much of the sediment in the kettle and lost quite a bit of wort as a result.

Wort went into the fermenter at 83F.

I pitched the packets of dry yeast into the fermenter without rehydrating since the temp was a bit high. The beer was kept in a location with a 68F ambient temperature and allowed to ferment without any temperature controls.  Yeast was pitched on July 31. Primary fermentation is expected to be complete on August 27, at which time the beer will be transferred to a secondary fermenter.  While in secondary, the oak cubes will be soaked in 6-8 ounces of bourbon for a day. The cubes and bourbon will then be added to secondary to contribute their flavor to the beer.

At bottling time the bucket contained 4.25 gallons at an unadjusted reading of 16.5 Brix. When this figure is adjusted for the presence of alcohol using BeerSmith, it works out to a final gravity of 1.040 and an alcohol by volume of 9.7% not including the bourbon added during secondary.

Final volume in the bottling bucket was about 4.3 gallons. The beer was primed with 5.1 ounces of corn sugar and rehydrated champagne yeast to ensure carbonation. After bottling, the bottles were stored for a week in an insulated cooler heat-controlled to 76F. They spent an additional week or more at ambient basement temperatures of 65-68F before serving.

BeerSmith says that based on the original gravity of 1.112 SG and the final gravity reading on the refractometer of 16 Brix, the finished beer is 10.2% alcohol by volume. That's probably slightly low given the addition of bourbon along with the oak cubes. 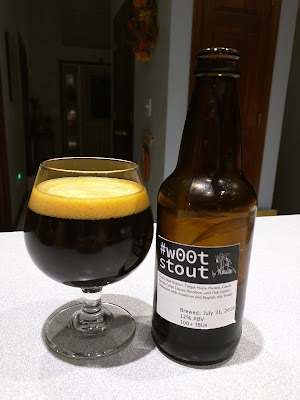 At left, you see a bottle of the finished beer poured into a clean glass.

The color is a pitch black with finger-thick tan head that lasted about a minute or so.

The flavor starts with a mix of hops bitterness, bourbon, oaky vanilla, and a hint of sweetness. This is followed by more bourbon and sweet malt, with a hint of astringency I associate with the hops. I get a bit of chocolate, coffee, and a hint of the pecans as well. The finish is bitter and lingering. It's a complex and intense collection of flavors.

Family members and friends who have tasted the beer have generally liked it or loved it.

If you make this kit, I would definitely recommend using a good quality bourbon as I did. (I used locally distilled Watershed Bourbon.) The reason I say this is that if you use enough bourbon to cover the wood cubes it will definitely be prominent in the beer. If you use a cheap or nasty bourbon then your beer's going to have a cheap, nasty bourbon element to the flavor.

When I've made high-gravity beers like this, carbonation has been the biggest challenge. As the photo in this post shows, the use of fresh yeast, plenty of priming sugar, and time spent in a warm environment seems to solve that issue. Despite being over 11% alcohol by volume, this beer did carbonate well and generate a nice head.

Many would disagree but for my taste this beer is a bit too bitter. If I brew it again, I'll probably dial back the hops load a bit. I might also do something to increase the chocolate flavor and consider adding some Special B malt to give it some fruit notes to go with everything else.

Apart from this, there isn't much I'd change about it. It has a nice range of flavors and they all seem to work together.

That being said, although I like the beer I don't love it as much as some do, so I don't know that I'll make it again. We'll see.