RIMS Brewing and The Grainfather

August 07, 2016
In extract brewing, there is no mash step. The brewer may choose to steep some specialty grains to grain the flavors they offer, but the mashing was done by whoever created the malt extract used to produce the beer. The benefit of extract brewing is that you save time and don't need as much equipment. The down-side is that you have less control over the flavor of your beer.

For all-grain brewers, it's all about the mash. This is analogous to extract brewing's steeping and stirring in of malt extract, but is considerably more complicated. I won't go into all the complexities here, because to be quite honest I doubt I know or understand them all. There are a number of ways to perform a mash. These include:
The Grainfather is something of a mix between Infusion mashing and Temperature mashing. It's known as a Recirculating Infusion Mash System (RIMS). In a RIMS system, a heating element provides direct heat to the mash vessel - just as would happen in a Temperature mashing system. In addition, The Grainfather includes a pump and tubing which draw wort from below the grain bed and above the heating element, pump it to the top of the kettle, then allow it to pour through the grain bed.

The diagram below illustrates a RIMS system like The Grainfather. The dashed blue line represents the movement of wort through the system. 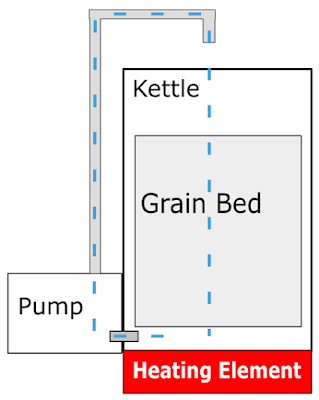 The benefit of an infusion mash is that nearly every beer style in the world can be produced using it. A recirculating infusion mash has the added advantage of clarifying the wort by using the grain bed as a sort of filter. The Grainfather improves on this by using a computer-controlled heating element to maintain more precise temperature control than a typical infusion or decoction mash setup. (I'm not saying that infusion and decoction systems can't be tweaked to provide precise temperature control, only that it's not as easy without the recirculation and computer control.)

In a RIMS system like The Grainfather, one of the biggest risks you run is scorching the malt or caramelizing it near the heating element. As long as the recirculation pump is doing its job, pulling hot wort from the bottom of the kettle and moving it to the top, scorching is less likely. Even so, the designers of The Grainfather built it with a thermal cut-out switch (kind of like a temperature based circuit breaker) that will disable the heating element if the bottom of the kettle seems to be scorching and heating up. It's definitely possible to scorch some of your wort with The Grainfather (I know because I've done it) but it's not a common situation.

The main benefits of a RIMS system are:
Some potential drawbacks include:
In my experience, adding a bit of Carapils or Melanoidin malt to a recipe solves the foam/head problem. I've always used yeast nutrient in my beers, so if the clearer wort has caused my yeast trouble, they didn't notice it as they were able to find plenty of nutrients elsewhere in the wort. Scorching of a small amount of wort has occasionally happened, but it's pretty uncommon.

As for the expense, having a turnkey all-in-one system has been helpful for me. If it cost a little more, that wasn't a huge problem for me.