I've only made one Belgian Dubbel in all the time I've been brewing. That was an extract-based Dubbel that turned out just "OK" by my taste. I decided to create a new all-grain one.

Some of you may be wondering why there's Melanoidin and Cara-Pils malt in the recipe. The short answer for this is that I've had trouble with some of my Belgian style beers getting a decent head of foam on them after they're poured. These two malts contribute to head generation and retention. I also dropped 3-4 pellets of Northern Brewer hops in with the Styrian Goldings for the same reason. High alpha acid hops can contribute to foam generation and retention. My hope is that this combination will result in a beer that has a nice Trappist-style head on it when poured.

Put 5.25 gallons of water into The Grainfather and added a Campden tablet to remove chlorine and chloramines. My tap water is not far off from typical Belgian water, so no other adjustments were made. This water was heated to 140F.

Grains added to kettle and a tablespoon of pH 5.2 Stabilizer added. Mashed grain at 140F for 30 minutes, then increased the mash temperature to 160F.

While doing this, heated 2 gallons of sparge water to 170F.

As the grain mashed, a lot of foam was generated on top of the grain basket. It very nearly reached the lid of The Grainfather.

Raised temperature to 168F for mash-out and held it there for 10 minutes before removing grain basket for sparging. When grain basket seemed mostly drained, sparged with 2 gallons of water.

This recipe used a 90-minute boil. Added the Golden Candi Syrup as the wort heated to boiling since I was low on D-90 and I hoped that might darken it a bit.

At 60 minutes, added Styrian Goldings hops pellets, plus 3-4 pellets of Northern Brewer at 10.1%. The Northern Brewer was added to incorporate some high-alpha hops in the beer for head retention.

At around 30 minutes, cleaned and sanitized my fermenter and airlock so they were ready to use.

At 15 minutes, added the Yeast Nutrient.

At 7 minutes, began recirculating wort through the wort chiller to sterilize it.

At 5 minutes, added the Saaz pellets and Whirlfloc.

At 0 minutes, started a whirlpool in the kettle and began pumping wort through the counter flow chiller into the fermenter.  Wort entered the fermenter at approximately 83F. This was too hot for the yeast, so I wrapped my fermentation chiller around it and lowered it to 70F before pitching the yeast.

After pitching the Omega Labs yeast, I left the fermenter alone for over 24 hours. There didn't appear to be any fermentation going on. There was no airlock activity and the wort temperature had dropped to room temperature. I pitched a packet of T-58 Belgian Abbaye yeast to ensure the beer fermented. The next day the temperature had jumped to around 10F above ambient and there was airlock activity.

The beer will spend two weeks in the primary fermenter with no temperature control. This allows the yeast to get as warm as it likes, hopefully generating more esters and phenols in the process. Primary fermentation should be over on approximately September 30, 2016.

After approximately two weeks in primary, I will move the fermenter into a mini-fridge with a temperature controller and keep the beer at 40F for two additional weeks of conditioning.

I added 5.25 ounces of priming sugar and rehydrated champagne yeast to carbonate the beer. It was bottled in a variety of 12-ounce and 22-ounce bottles. These were placed in an insulated chamber kept at 76F.

A sample tasted at bottling time seemed good. It was just slightly sweet, had a hint of plum, and a hint of roasted grain. I'm hopeful it'll turn out well. 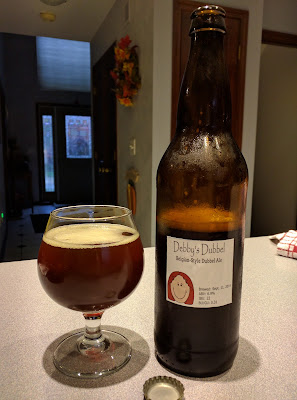 For the most part, this brew went off without a hitch. I ended up with a higher gravity than I expected, but I suspect this was due to not accurately measuring the amount of candi sugar used. I also had a slightly lower pre-boil volume than expected (6 gallons vs. 6.4).

The biggest mistake I made this time around was not confirming that I had a full package of D-90 syrup before I started, and I think I lost track of how much Pilsner malt went in. I'd originally planned for 3.5 pounds but ended up losing my place while weighing the grain and used 3 pounds instead.

The finished beer is a mahogany color with a reddish hue. I'd wanted the red color be more obvious, and it might have been if I'd had more D-90.

The aroma is fruity and malty, hinting at sweetness. The beer itself is nicely balanced. There are hints of plum and roasted grain. Overall, it's an incredibly easy beer to drink and is nearly gone already.

The candi sugar fruit notes aren't coming through like they should, probably because I didn't have enough to add. That's something I'll correct when I brew version 2.0.