My Brewing Process, Part 3 - The Boil

October 02, 2016
In the first two parts of this series, we covered recipe selection and adjustment, getting the ingredients ready, and performing the mash in The Grainfather. This week, we'll look at the boil.

The Grainfather makes the boil process pretty simple. The kettle is deep enough that boil-over on a 5-gallon batch is unlikely. The thermal cut-out switch reduces the chances that you'll scorch the wort when adding sugars, syrups, or other ingredients. 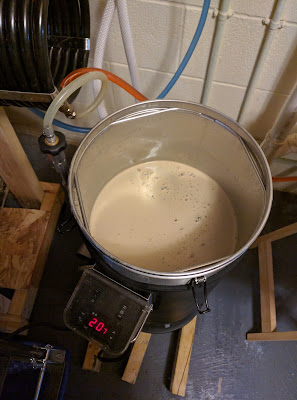 When we last saw our example beer, it was just starting to boil. When it finally reaches a boil, I take out my stainless steel spoon and stir the hot break foam back into the wort.  Once the foam stops forming on top of the wort, I'll rig up my hop spider and place it in the kettle. I take two soapstone rocks and drop those in the bag to weigh it down. I use binder clips to ensure that the hop bag stays on the spider and doesn't drop into the kettle.

As I mentioned in the first post, I have my hops already measured and laid out on the table. When it's time for each addition, I just dump the pellets from the plastic bowl into the bag in the hop spider.

While hops pellets, large spices, and other items will go into the hop spider bag, Irish Moss and candi syrup go into the kettle directly.

Near the end of the boil, the counter flow chiller (the large black coil you see below) must be sterilized inside to prevent contamination of the wort. To do this, you connect the chiller to the kettle's pump and drop the "wort out" line into the kettle.

The boiling wort sterilizes the inside of the counter flow chiller as it flows through. When the boil is over, the pump is switched off. The "wort out"line is moved into the fermenter. The cold water line is turned on to run cold water through the wort chiller. After a couple of minutes to cool down the wort chiller, the pump is switched back on.  Now wort is flowing into the fermenter.

This concludes the boil stage. Next week, we'll talk about fermentation.