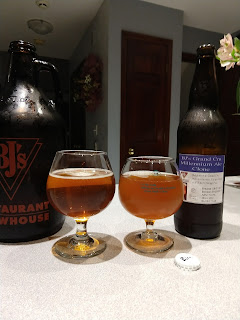 BYO Magazine posted a clone recipe for BJ's Brewhouse's Millennium Ale. This is a Belgian Tripel brewed with bitter orange peel, orange blossom honey, ginger root, and coriander.  They created it to celebrate Y2K and ended up brewing it for several years afterward.  I've always tried to make it a point to get to our local BJ's when they have this, but I've missed it the last year or two, so I decided to brew my own.

At right, you see a photo with the actual BJ's brew on the left, purchased in a growler from them the day before the photo was taken, and a glass of the clone on the right.


BeerSmith and Other Stats

According to BeerSmith and some of my own calculations, here are the stats around this beer:


Actual statistics around this batch were:

The BYO recipe called for a 60-minute mash at 154F.  The Grainfather calculations estimated that I would need 5 gallons of mash water, so I added that to the kettle with a Campden Tablet to remove the chlorine and chloramine from the local tap water.  2 gallons plus 38 ounces of additional water would be used to sparge, and was set to heat slowly while the grain mashed.

After the 60-minute mash time, I did an iodine test which came up clean, indicating a full conversion.  I set The Grainfather controls to 170F and did a 10-minute mash out.  The sparge water was poured into the grain basket to sparge the grain, and the controls were set to boil while the sparge occurred. (I've found this reduces the total brewing time versus waiting until the sparge is complete to set the kettle to boil.)

A 90-minute boil was called for in the recipe, with the following schedule:

During and after the boil, the presence of ginger root in the beer was noticeable in the aroma.

The BYO recipe calls for a 68-70F fermentation until a final gravity of 1.020 SG is achieved.  I set up the temperature control system and got it ready to go.

Wort entered the fermenter at approximately 75F after leaving the chiller.

Update 06/04/2017:  When I checked on fermentation yesterday, the airlock was bubbling nicely. Today, yeast had blown up through the airlock, out the top, and across the lid of the fermenter. It took a bit to cleanup the yeast and sanitize the top of the fermenter before removing the airlock, which actually hissed when it was removed. I suspect pressure was building up inside the fermenter and could have explosively blasted the airlock out had I not checked on the beer this morning. I will check on it again in a few hours to ensure that things are back under control again.  If you make this beer in anything less than an 8-gallon vessel, I'd recommend a blow-off tube. When I checked on it again late in the day, there was a thin layer of yeast inside the replacement airlock, which had been clean beforehand.  I replaced the airlock yet again at 11pm to hopefully protect against further blow-off of yeast.

Update 06/16/2017:  Earlier in the week, I put a fermwrap heater around the fermenter and set the temperature control to 73F.  The yeast picked up its activity.  For the last couple of days there has been no airlock activity, so I suspect the beer has fermented out. I'll be putting gelatin finings in it soon and moving it to my mini-fridge when I pull the Rhinegeist Truth IPA clone out of it.

Pre-boil gravity and original gravity came up lower than expected for this batch. I'm not sure yet how to account for that.  Regardless, I think the beer will turn out well.

Temperature control was setup to hold the beer in a 64-70F temperature range.  Given the ambient temperature of 68F, realistically it will stay within the 68-70F range called for in the BYO recipe.

Update 06/25/2017: The beer was dosed with gelatin finings on 6/21/2017 and has spent four days in my mini-fridge getting clear.  I settled on a carbonation level of 3.4-3.4 volumes of CO2, which BeerSmith calculated to require about 6.25 ounces by weight of corn sugar. While I sanitized bottles, the bottling bucket, etc., my wife boiled a half cup of water and dissolved the sugar into it.  I sanitized a dozen bomber-sized bottles and filled the rest of my bottle tree with 12-ounce bottles.  I placed the bottles in my "hot box" with the thermostat set to 74F, and moved the last batch of bottles out of it.  Around the fourth of July, we'll see how the beer turned out.  Bottling yielded 12 bomber sized (22 ounce) bottles and 28 smaller 12-ounce bottles.

Things I would do differently brewing this beer again:
A few samples taken from the fermenter for gravity checks had a nice flavor, so I'm hopeful this will turn out well and be a beer I brew again in the future.

11/18/2017:  When I brewed this beer back in June, I didn't expect to get to do a side-by-side taste test against the actual BJ's beer.  Fortunately we received an email from the chain indicating that the beer was now available.  We stopped in for dinner and brought a growler home. Last night, my wife and I did a side-by-side taste test.  Here are our notes:


All-in all, this is a pretty good clone recipe. Things I might try when I re-brew it:


Despite all the above, the flavor of the two beers isn't radically different.  It took almost a full glass of each for us to pick out all the differences listed above.