June 16, 2017
While taking an inventory of my brewing supplies this week, I noticed that I had five packages of yeast that were older than I realized. One had no date on it at all. Another was past its "best by" date, and the last was over two years old (and I decided to throw it out).

Rather than let these yeasts go to waste, I decided I should probably grow them so they'd be usable when I am ready for them.

I could do that by mixing up a batch of "Fast Pitch" wort starter from cans and using my stir plate.  That would mean spending at least $10 on the cans of starter. I'd have nothing to show for it but the yeast, which would be OK but kind of a waste of time and materials.

A good yeast starter wort is typically said to have an Original Gravity (OG) of 1.036 to 1.040.  I decided to build a wort recipe with a gravity of 1.040 SG (10.0 Brix) to use as a yeast starter. Rather than make a disposable wort that served as a starter and was then tossed out, I decided to use it as an experiment for learning how different yeasts affect a beer's flavor. My goal is for this to turn out a drinkable (albeit weak) beer using different yeasts.  Then I'll have those yeasts available for upcoming brew sessions.

I decided to start with a mix of 2-row pale, Munich, Vienna, and Caramel malts so there would be some decent underlying malt complexity. It's loosely based on an Oktoberfest formula. That should be compatible with all the yeasts I'm using and is similar enough to the worts I'll eventually use the yeast on to ensure that the yeast can handle them. I decided to use Czech Saaz hops to bitter, flavor, and provide aroma, as they are a noble variety that's used across many beer styles.  I also wanted to try a hopping approach that I hear is becoming more popular, which is using late additions to accentuate the hop flavor without adding too much bitterness. I'm timing the hops additions so that the majority of the bitterness comes from late additions.

Using the Brewer's Friend Yeast Starter Calculator, I worked out roughly how much yeast remained alive in the containers, and settled on wort volumes that would hopefully grow that yeast to my desired amounts for future brewing.

The yeasts I'll be growing include:


My goal is to brew a 5.1 gallon batch (Why 5.1 and not 5.0? The Grainfather calculations always seem to end up with 5.1 gallons post-boil so I use that amount to ensure proper gravity. Your mileage may vary.) and then split the batch up into four parts:


This means that I'll effectively have six beers fermenting in my basement when I'm finished.  (I have an IPA and a Belgian Tripel in fermenters already.)  That's the most I've ever had going at once!

I decided to do a Hochkurz Mash for this brew, so that the wort is very fermentable and the yeast has lots of sugar to grow on.  The mash schedule I'm using is;

This should result in a 6.4 gallon pre-boil volume.

I used a 60-minute boil schedule, with hops loaded toward the end of the boil to provide more flavor and less bitterness. The goal is a beer that is relatively balanced but not over-hopped given that it's going to be fairly low gravity.  So 11.4 IBUs might not sound like a lot to an IPA fan but in a beer with such low gravity that's a BU:GU ratio of 0.282.  It should work out to be fairly balanced unless the beer attenuates really well, in which case it'll tend toward the hoppy side.
I expect 5.1 gallons of wort, but will be splitting it across several vessels to allow for growing multiple varieties of yeast (as noted earlier).

The plan is to let the yeast ferment without any attempt at temperature control. The low ambient temperature in my basement combined with the comparatively small volumes of wort should mean that the temperatures won't rise especially high during fermentation, but that does mean that I'm taking a risk that a given yeast won't overheat and generate off-flavors. Since this is a fairly low gravity wort, that seems unlikely to happen.

In the above photo, you see the five fermenters and their wort. The yeasts were all within or near their "best by" dates, except possibly the Omega yeast - which had no easily identifiable date on it. (Since I don't recall when I bought it, it might have no living cells left in it.  Any worts that don't show signs of fermentation within 48-72 hours will likely have a similar fresh dry (or liquid) yeast pitched in to ensure that I don't waste the wort.

Once they're all fermented and bottle conditioned, I'm planning to do a taste test here to see how one wort with five yeasts can end up with different flavors.


Update June 17, 2017:  All yeast strains but the Scottish ale strain show activity. The Wyeast 3787 Trappist High Gravity strain was beginning to clog its airlock, so I replaced it with a clean airlock. Within a few minutes I saw yeast accumulating in that one too, so I rigged up a blow off tube (shown below). I also put the Scottish ale yeast on a magnetic stir plate to try to revive it by introducing additional oxygen. If there is no indication of activity tomorrow, I'll consider pitching in another strain like Safale English Ale yeast.


Update June 18, 2017:  Today even the Scottish strain shows a small krausen in the fermenter. It will be interesting to see if, when that portion of wort is finished fermenting, we really have Scottish Ale yeast or something perhaps picked up out of the air.  The Wyeast 3787 is still bubbling actively and has turned the previously-clear water in the blow-off vessel a milky beige.  The Denny's Favorite 50 yeast shows signs of the yeast beginning to drop out of suspension, as does the Bastogne yeast.  The Omega yeast has about an inch and a quarter of krausen on top and seems to be working fine. All five yeasts at this point appear to be alive and well.  My plan is for all these yeasts to have at least a full week (preferably two) in the wort before I bottle the beers and harvest the yeast in the fermenters.


June 20, 2017:  The Bastogne, Denny's Favorite 50, and Edinburgh yeasts have mostly settled out of the wort. A wispy layer of foam remains atop the wort and there is no longer any visible airlock activity. The Trappist High Gravity yeast, Omega Belgian Ale W, and Edinburgh yeasts still show some signs of airlock activity. Compared with a couple of days ago, all the fermenter contents are clearer and show little or no motion.  This relative lack of activity is consistent with normal, healthy yeast activity.  While I was checking on the beer, I took the time to complete the washing of a prior batch of White Labs California Ale yeast from an IPA I made recently, and started washing the yeast I kept from an Australian Sparkling Ale.  That yeast was harvested back in April, so it will need to be revived as soon as one of these fermenters becomes available.  I anticipate being able to bottle some or all of these beers this coming weekend.

June 25, 2017:  Virtually all the beers have stopped actively (or at least visibly) fermenting. The fermenters contain very clear-looking beer with little floating on top of them, so I'm concluding that they are probably done fermenting.  I bottled all five variants today and harvested the yeast for future use.  Some of the beers had small amounts left over after bottling. I tasted those but have to say there wasn't much difference between them.  The one with Wyeast 3787 had a bit more of a Belgian flavor to it. The Denny's 50 had no discernible yeast flavors.  The Edinburgh Scottish version seemed maybe a little more malty.  But the differences are extremely subtle.  The experiment yielded 43 bottles at 12 ounces each, divided among the five yeast strains.  Yeast has been harvested and placed in cold storage.

When all of the yeasts finished fermentation and settled out of the beer, I bottled it. Each bottle was labeled with the recipe (for friends who are brewers) and the yeast strain used to ferment that variant of the beer.  I chilled a set of five bottles, then opened and poured them: 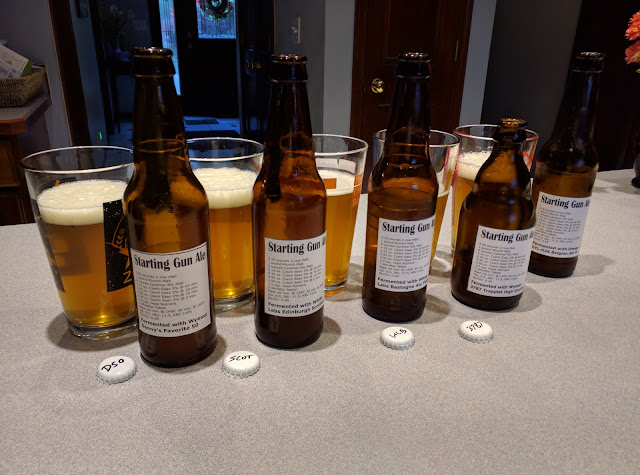 Here are my tasting notes on each variant:


After compiling all these notes, my wife and I then decided to rank the beers from best to worst.  The ranking came out this way:
It's also worth mentioning that the technique of obtaining most of the bittering through late-addition hops yielded an interesting result.  While there was plenty of hop flavor to offset the malt, the bitterness seemed "softer" and easier to drink.

December 18, 2015
Chapman's 7-Gallon Stainless Fermenter Recently, I found the Chapman Brewing Equipment 7-gallon SteelTank stainless steel fermenter on sale on Amazon for approximately $110.  That's about half the price of the other stainless steel fermenter I own, Ss Brewing Technology's Brewmaster Bucket. In fairness to the Brewmaster Bucket, the Chapman fermenter lacks a number of features.  The Chapman has no legs underneath it.  It's not designed to stack multiple fermenters on one another.  It has no thermowell or thermometer.  It doesn't have a conical bottom to catch yeast and sediment.  It also doesn't have a spigot you can use for bottling.  So the extra $100 buys a few features you're not getting here. That said, there is nothing wrong with this fermenter.  It seems very well made from 304 stainless steel.  There are good strong looking handles.  The gasketed lid can be clamped down for sealing and safety when carrying.  It even ships with a 3-piece airlo
8 comments
Read more