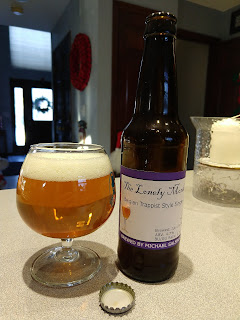 Tonight I decided to run yet another test to dial in the gravity and volume calculations for my sous vide based brewing setup.  Since I had a Dubbel, Tripel, and Quad fermenting, doing a Trappist Single seemed like a good next step.

I have a Single recipe that I've been pretty happy with, but still wanted to tweak it a bit more.  This was a good chance to make those tweaks and see work on the calculations at the same time.

According to my BeerSmith calculations, this brew should have the following characteristics:

After brewing. the actual stats on this batch were:
Mash

The mash for this batch was done in a Ziploc bag, inside a stock pot full of water, to which the sous vide cooker was attached.  The sous vide cooker's temperature seems to be about 2 degrees below what it registers (i.e., if it says 156F the actual temp is 154F).  The contents of the Ziploc tend to be 3-4 degrees below the surrounding water (i.e., if the water is 156F, the bag's contents will be 152-153F).  Using this information, I adjusted the temperature settings so that I hit my intended mash and mash out temps.

The grain was emptied from the bag into a strainer placed over the stock pot used for boiling.  As the grain drained and was sparged, the stock pot was heated to boiling.

Because I was trying to nail down calculations, I took a moment to measure the pre-boil volume.  It came out to 1.56 gallons versus the expected 1.64 gallons.  Pre-boil gravity was 7.0 Brix versus the 9.0 Brix calculated by BeerSmith.

The following boil schedule was followed:
I achieved a post boil volume about 8-10 ounces short of the expected 1 gallon.  I'll use this info to tweak my calculations.

Trying to keep things simple, I transferred the wort into my plastic pitcher and placed it inside the mini-fridge to chill to yeast pitching temperature.  This will likely result in a cloudy brew, but my goal here was to check the flavor of the recipe and sort out calculations - not brew the clearest beer i could.

I had harvested a bunch of Wyeast 3787 from the BJ's Grand Cru clone I did last month, so I used some of that to ferment this beer.  If you've never used this yeast before, I strongly recommend a blow-off tube.  I've experienced some amount of blow-off with it regardless of the amount of head space, volume of wort, or gravity.  I set up a blow-off tube for this beer from the start.

The goal is to ferment the beer at ambient temperature with no temperature control for the first week, after which it will be moved to an insulated and heated chamber.  In there, it will be kept at 76F for another week or two until fermentation seems to have stopped.  After that, it will be bottled.

After my least batch in the sous vide setup, BeerSmith calculated my efficiency at 75% for the batch.  This time around, I used 75% as my estimated Brew House efficiency.  After completing the measurements, BeerSmith says I hit 71% efficiency for this batch.

I estimated boil-off for the setup at 0.64 gallons per hour. That's exactly what I achieved on this batch, going from 1.56 gallons to 0.92 gallons after a one-hour boil.

It looks like I probably needed about another 8-10 ounces of sparge water to hit the pre-boil volume on the nose.

Given that I used 2.5 quarts of water for mashing and 4.5 quarts for sparging, that's 7.0 quarts total.  My pre-boil volume measured as 1.56 gallons or 6.25 quarts.  This means the grain soaked up approximately 0.75 quarts.  That is 0.75 quarts for 1.69 pounds of grain or 0.44 quarts per pound.  I modified my spreadsheet to calculate future sparge volume based on 0.44 quarts being absorbed for each pound of grain.

One thing I have noticed about this setup in the last few batches is that it tends to not strain out all the bits of grain.  A certain amount ends up in the boil.  This is something to be addressed in a future run with the system.

Update 07/25/2017:  The beer has a thin krausen on it now.  I'm not sure if it's hit the height of its fermentation or not yet, but there is very visible activity in the fermenter so I am not complaining.  It's beginning to lighten in color a bit, too, which is a sure sign that fermentation is underway.

Update 08/12/2017:  The beer has been bottled using Cooper's carbonation drops and has spent two weeks conditioning at 78F in the bottle to ensure carbonation.  It pours with a light level of carbonation, consistent with the carbonation drops but of course lower than a typical Belgian beer.  It pours an amber color, with a thin head that dissipates quickly.  The aroma is mild, with hints of fruit and spice.  The hops come through pretty clearly in the flavor, which is expected for this style.  I'll need to scale the recipe up to see if I am convinced it's better than previous attempts at a Single, but so far I'm hopeful.

Update 01/01/2018:  The beer has now been in the bottle for over four months. I poured the glass pictured at the start of the article today.  It pours a nice gold color with a thick white head that lasts for about 30 seconds before reincorporating into the glass.  The aroma is fruity, herbal, and sweet.  The flavor is dry and balanced, compared to the aroma.  Hops definitely balances the malt in this one, and takes the foreground after the initial sip and into the finish.  The finish is clean but with a lingering bitterness.  Let's compare this with the BJCP style guidelines:


How would I improve the score?


Other than the above, I think I've done as well as I can with this one.