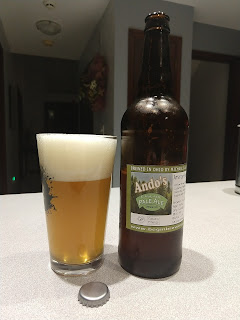 This recipe started out as an attempt to replicate the no-longer-made Stevens Point Brewery Cascade Pale Ale. A good friend of mine was a huge fan of the beer and was disappointed when it was no longer being made.  My first attempt was a drinkable beer but bore little resemblance to the real thing. My second attempt was much better, and my friend (who may have been being nice) said he preferred it to the real beer.  Still, even that version was a little light on hop flavor and a bit darker than the actual beer.

For this version, I'm going with a plain 2-row malt base instead of a Pale Ale malt. This should lighten the color of the beer.  I'm increasing the amount of Caramel and Munich malts to get closer to the original beer's sweetness level, and adding some Cara-Pils to give it a longer-lasting head.  I'm also going to hop the beer every 5 minutes, kind of a balance between minute-by-minute continual hopping and using the typical addition timings (i.e., 60, 30, 15, 10, 5, 0). I'm hoping this will enhance the hop flavor and give a bit more bitterness too.

According to BeerSmith, this beer should yield the following characteristics:


Post-brewing, the following actual values were recorded:
As you can see, I came out way below my usual efficiency on this batch. My suspicion is that this is a result of using a variety of grains I've had on hand for a while.  The Cara-Pils, Caramel 10L, Munich, and a good percentage of the 2-row malt have been in my storage area for several months.  It's possible that they couldn't deliver the yield expected from them.  Since one reason I brewed this beer was to clear out those grains, I'm disappointed but not upset about this result.

A 45-minute mash at 158F will be conducted.  The Grainfather tends to have an average internal grain bed temperature a bit lower than what is indicated on its thermometer, so I'm mashing higher than I'd normally do to see if this will improve the sweetness and body of the beer.

Again, to improve caramelization and hopefully provide some unfermentable sugars to offset the increased hops load this time, a 90-minute boil will be used in this version of the recipe.

The boil schedule:
After a few minutes of whirlpooling, transfer wort through the counter flow chiller into the fermenter.

Once again, I used The Brewcolator for this batch of beer.  This is a device intended to "percolate" the beer in the kettle to increase boil-off, drive off DMS precursors, reduce fuel consumption, and produce better beer.  My first test didn't indicate a significant difference between using the device and not using it.  The second test saw it clog with hops particulate due to an accidental direct kettle addition (instead of one in the hop spider).  This time around, the device had a much better chance to show its benefits. It was in the kettle for a 90-minute boil, hops pellets remained in the spider, and The Brewcolator was properly adjusted for height.

The net result was that I saw a significant increase in boil-off for this batch.  I've measured boil-off in the past at 0.4 gallons per hour in The Grainfather, which matches up to their specs for the device.  With the addition of The Brewcolator, I saw this increase tonight to 0.7 gallons per hour, or 1.05 gallons over a 90-minute boil.  That's a pretty significant increase.  If this holds across multiple batches, The Brewcolator may be a piece of my standard kit from here on.

According to White Labs, the California Ale Yeast likes a temperature in the 68-73F range. I'll set my temperature control system to 70F and have it keep the wort as close to that temp as it can.  This should yield a mostly neutral yeast flavor profile, keeping in line with the original Stevens Point beer.

I'll need to keep an eye on this batch, as the yeast I pitched was harvested from a batch of IPA I made in late June.  That makes it a bit under four months old.  My experience so far has been good with harvested yeast, but this would be the oldest harvested yeast I've used.  If I don't see airlock activity within 48 hours, I'll pitch some US-05 yeast into the fermenter to supplement it.

After 1-2 weeks in Primary, I'll add gelatin finings and transfer the beer into my mini-fridge to cold crash and clear it up.  I'll also add the dry hops at that time.

After 3-4 days in cold crash, I'll transfer it to a bottling bucket and bottle it.

Given the relatively low alcohol content (5.4%) it should have plenty of viable yeast, even after cold crashing, so bottle conditioning yeast should be unnecessary.

10/08/2017:  With version 2.0, I had a good pale ale, but one which still did not measure up to the original Stevens Point beer.  It needed more sweetness and more hops flavor, plus a touch more bitterness.  This time around, I hoped that continual hopping, increasing the mash temperature, lengthening the boil, and increasing the amount of Caramel and Munich Malts would achieve these goals.  In a few weeks, we should know the answer.

It took me 4 hours and 15 minutes to produce this beer from beginning to end using The Grainfather. That's a much shorter brew time than I normally experience, so I am happy about that.  I used hot tap water to start the mash and sparge water, cut the mash to 45 minutes instead of the usual 60, and leveraged The Brewcolator to help with the boil.  With The Brewcolator installed, I saw 4L of evaporation in a 90-minute boil.  That's 1.05 gallons, or approximately 0.7 gallons of boil-off per hour.  The Grainfather typically sees 0.4 gallons of boil-off per hour.  If this figure repeats across a number of brews, I may have to re-adjust my calculations to account for a dramatically increased boil-off amount.

10/18/2017:  A sample extracted from the fermenter showed that the color is indeed much lighter this time around.  The flavor of the sample showed a definite hops bitterness, though none of the sweetness I had been hoping to achieve.  It's still too soon to tell, but I expect we'll have a version 3.1 at least, before I nail this one to my satisfaction.

10/22/2017:  An ounce of Cascade was added to the fermenter today as dry hops to improve the aroma of the finished beer.  A teaspoon of gelatin was "bloomed" in four ounces of water and then microwaved to 160F to sanitize it before being added to the fermenter.  The dry-hopped and gelatin-fined beer was then moved into the mini-fridge for cold crashing prior to bottling.  I'm expecting to bottle it Wednesday or Thursday evening, and to test the first bottle a week later to see how it's turned out.

10/29/2017:  The beer was bottled with 5.25 ounces of corn sugar dissolved in boiled water.  Yield was roughly 4.5 gallons.  I ended up with approximately 18 22-ounce bottles, 2-3 16-ounce bottles, and 13 12-ounce bottles.  Below is an image of the bottles in the "hot box" I keep them in to ensure consistent, proper carbonation temperature.  Around November 5 I should have my first sample, and I'll start sharing with family and friends around the 12th. 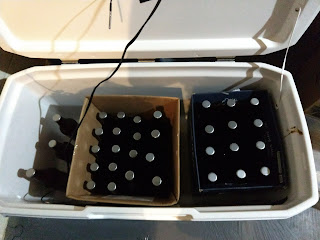 11/1/2017:  An early sample bottle shows good carbonation. The aroma was mildly hoppy. Flavor had a touch of diacetyl (which is to be expected this early in bottle conditioning), a moderate amount of Cascade hops flavor, and only the slightest sweetness from the malt. Still not what I want it to be but definitely improving.

11/12/2017:  Today I labeled the bottles in preparation for sharing with friends and family.  My friend for whom the beer is named sent me a text after trying his first bottle. He said that he was enjoying the beer very much..

11/21/2017:  The beer has been disappearing fast. I have about 11 small bottles left and approximately 10-12 bombers. I placed as many as I could fit in the mini-fridge to see if I can get them to clear up a bit more, as most have been fairly hazy when poured.