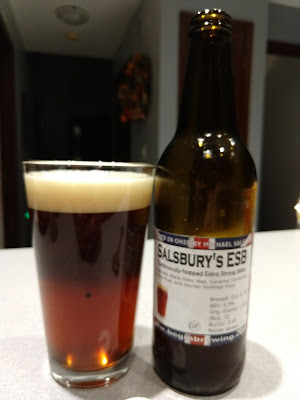 I like a good English beer from time to time, and am fond of the Extra Special Bitter (ESB) style.  After surveying a number of recipes out there, I decided to formulate one of my own.  I made a 1-gallon test batch a few months back and it turned out great. It disappeared quickly.

One thing I didn't love about it was the flavor of the East Kent Goldings hops.  There is something in that hop variety that disagrees with my tastebuds, so I decided to shake things up a little in version 1.1.  Specifically, I am going to replace East Kent Goldings with Styrian Goldings and instead of using 60, 30, and 15 minute hop additions I will continuously hop this one.  Will it turn out like a traditional ESB or will it seem more like an "Imperial ESB" or "American ESB"... I don't know. We'll find out.

Per BeerSmith and my equipment profile for iMake's The Grainfather, this beer should achieve the following characteristics:

4.1 gallons of water were placed in The Grainfather and treated with a Campden Tablet to remove any chlorine or chloramine.  The water was heated to 154F and the grain added to the grain basket, periodically stirred during the addition to ensure there were no dough balls or dry patches.

The grain was sparged with 3.25 gallons of water at 170F.  (Since there is a one-gallon dead space in the kettle used, I actually added 4.25 to the kettle and treated that with Campden as well.)

BeerSmith calculated that I would have a pre-boil volume of 6.2 gallons at 12.4 Brix.  After sparging, I had 6.0 gallons.  I added water from my sparge kettle until I hit the 6.4 gallon mark, which is the correct amount The Grainfather calculations aim for when making a 5 gallon batch. Gravity at this point read 11.2 Brix (versus the 11.9 Brix at 6.2 gallons BeerSmith calculated).  This could have been the result of picking a weak sample for the refractometer or the result of dilution.)

The Boil (and The Brewcolator)

After obtaining the 6.4-gallon pre-boil volume, I gently lowered the Brewcolator into the kettle using a silicone mitt, as I expected boiling hot wort to leak out the top as I lowered it.  That did not occur. I did note, as the photo below shows, that the sprayer was about an inch above the top of the liquid. The instructions recommend having it just above the top, so I removed it and adjusted the height down about an inch so that the set screw seen in the picture below was just under the wort level.

As the wort reached a boil, I divided the 2.5 ounces of hops into five equal-weight batches.  I labeled these for each 12-minute segment of the boil process.  I divided the first 12-minute portion up into 12 roughly-equal amounts.  This worked out to about 5-6 pellets per addition.

I dropped in the first dose at boil. Every 60 seconds after that, I dropped in another dose of hops.  If you wonder why Sam Calagione invented a device (the aptly named "Sir Hops Alot") to do timed hop additions, making this many hop additions in a single batch will make that very clear to you.  It's tedious to do manually.  You feel almost chained to the kettle.  This is probably why some recipes I've seen involving continuous hopping time their additions every 3 minutes instead of every minute.  That would probably work just as well.

As for the rest of the boil, it went like this:
Post-boil volume was expected to be about 5.8 gallons.

This was my first use of The Brewcolator brewing device.  Until I have the time to construct a proper review and give a buying recommendation, these first impressions will have to do.  (Note:  I did not receive a free unit, nor was I asked by the creators to talk about it here.  These will be my honest impressions based on a single use.)

According to the marketing literature, the Brewcolator:


That's it in the image below.

It's made of stainless steel, including the screws that hold it together. The screws are used to adjust the height so that The Brewcolator's "nozzle" sits just above the top of the boiling wort.  As your wort boils, it will periodically percolate up the tube and spray out the top. This spraying action prevents hot break foam from building up.

According to the creators, "Because the heat is concentrated in the center of the brew pot, less fuel is needed to bring your wort to a boil. In fact, you may find that you need to turn the heat much lower than what you're used to."

They also say that "Sometimes you don't always have the perfect set-up for making beer. It could be that you have a giant pot on a small burner, or the wind is blowing the flame away from your brew pot. With the Brewcolator in your brew pot you will always have the benefit of a good rolling boil."

While there are many things I love about The Grainfather, one thing I don't like is that it never seems to generate quite as full a boil as I'd like to see.  It is a rolling boil, but compared to what I can get from an induction cookplate or on the kitchen stove, it's weak.  Since I often see chill haze in my beers, I've wondered if a better boil would fix that.  (This is a minor nuisance, since gelatin finings will eliminate most or all chill haze given enough time in a cold location.)  I bought The Brewcolator hoping that it might help.

I decided to try the device with this batch and see if it helped with hot break or a rolling boil.  I cleaned and assembled it, then dropped it into the wort as it heated to boiling.

As you can see above, the nozzle is about two inches above the liquid level.  I had to remove it from the kettle, loosen one of the lower set screws, and drop the height about an inch so that only the nozzle was above the surface of the wort. (I didn't think to get a photo of that.)  Soon, as The Grainfather's temperature reading showed approximately 190F, wort would periodically spray out of The Brewcolator's nozzle across the surface of the wort.  That looked like the image below (taken before I adjusted the height).

The idea is that this periodic spraying action automatically reincorporates the hot break foam into the wort.  In practice, it worked as designed.  In addition, spraying supposedly increases the surface area for steam to evaporate from, helping to increase boil-off.

The Brewcolator deserves a review in the future, but for now here are my first impressions:

With only a single use of the device under my belt, I can't say that I definitely recommend it yet.  (On the other hand, if you want a tool to prevent boil-over, this should do that just fine.)  I've got some questions I'll want to answer for myself in future tests, such as:

Hopefully someday in the near future I can post a full review to answer these and other questions.

Fermenter volume was estimated to be 5.1 gallons at 13.6 Brix by BeerSmith.  These numbers were hit on the nose, with 5.1 gallons in the fermenter and an original gravity measurement of 13.6 Brix.

The dry ESB yeast was pitched into the sanitized fermenter along with the Clarity Ferm, and the fermenter was sealed. Approximately 12 hours later, the airlock was bubbling actively.

The plan is to let this ferment until fermentation stops, 1-3 weeks from now.  I'm planning to use temperature control during the initial stages of fermentation to keep the beer in the 68-70F range.

10/14/2017:  The beer has definitely completed fermentation. I added a half-cup of water with a teaspoon of gelatin finings to it for clarification, and placed the fermenter in my mini-fridge to cold-crash.

10/22/2017:  I removed the beer from the mini-fridge today and although it's not crystal clear (and probably should not be for the style) it looks good.  I bottled a mix of 12-ounce and 22-ounce bottles.  Final yield was just under 5 gallons. I carbonated it with 4.05 ounces of corn sugar which should get me in the neighborhood of 2.2 to 2.4 volumes of CO2. That's on the high end for a British Ale but not insanely high.  I'll be back in a couple of weeks to do a photo and taste test.

10/29/2017:  At bottling, the beer seemed over-bittered to me, at least in a flat room temperature state.  That's no longer the case after carbonation and bottle conditioning for a week.  As you can see in the photos, it pours a nice reddish brown with thick head that lingers a while.  The aroma is one of malt, caramel, and noble hops. The flavor is mildly sweet, with caramel and maybe a hint of butterscotch, and just enough hops to balance the malt. It might benefit from maybe a 3-5 IBU increase in hops amount, but it's darned near exactly what I wanted it to be.  I'm very happy with it.

I made some equipment changes this batch which I thought might affect my efficiency. Specifically:
The rest of my process was unchanged.  As it turned out, I hit my gravity and volume targets on the nose again, so these changes either offset one another or did not alter my results.  This is good, as it means I do not have to alter my calculations yet again. 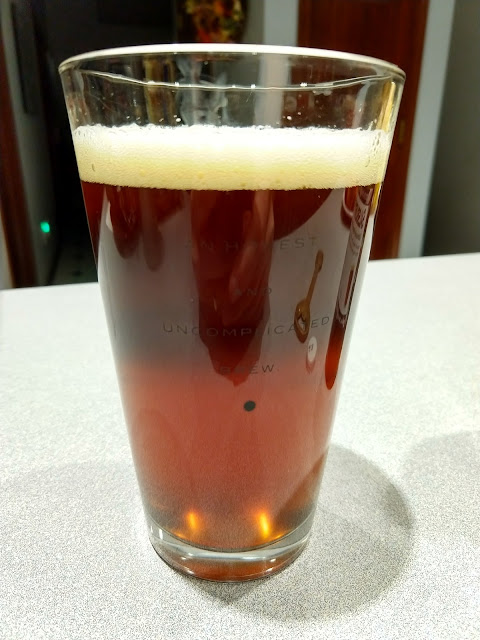 Brewing with The Grainfather, Part 1 - Mashing and Sparging

January 31, 2016
(Important note:  This article series is based on the US version of the product.  Prices are expressed in US dollars, measurements of temperature and volume are in US units unless otherwise noted.)

iMake's The Grainfather is an all-in-one RIMS brewing system designed to be used indoors with household electric current.  It includes the kettle, grain basket, recirculation tube, pump, electronic temperature controller, instruction book, and counterflow chiller.  It does not include a mash paddle, fermenter, cleaning supplies, or pretty much anything else.  The price is around $800-900 depending on where you shop and the discounts offered.

The Grainfather handles mashing, boiling, recirculating, sparging (to a degree), and chilling of the wort.  You'll still need a fermentation vessel of some sort and some other supplies we'll discuss later.

Assembly of The Grainfather in my experience was pretty easy overall.  There were a couple of s…
1 comment
Read more

August 28, 2016
In the last post, I shared an overview of The Grainfather, recommended equipment to use with it, and an overview of the brewing process.  In this installment, I'm going to talk specifically about mashing and sparging. Having brewed over a dozen batches with it, I'm finally becoming very comfortable with the device, the mash process, and how to get what I want out of it. I don't consider myself a "master" of it yet, though.

For those who have never done all-grain brewing, I want to provide a quick overview of the mash process itself.

February 14, 2016
In Part 1 of this series, I introduced The Grainfather and discussed how to use it for mashing and sparging.  In Part 2, we talked about boiling and chilling the wort with The Grainfather and its included counterflow chiller.  In this final segment, we'll discuss cleanup and overall thoughts about the device and its usage.

Once you've pumped the wort from The Grainfather into your fermenter and pitched your yeast, you're well on your way to a delicious batch of homebrew.  Unfortunately, you've still got some cleanup work to do.

The cleanup process in my experience will take 20-30 minutes.  It involves the following tasks:

Removing and discarding the grain from The Grainfather's grain basketCleaning the grain basket, kettle, recirculation tube, and wort chillerCleaning all the other implements used in brewing (scale, scoops, mash paddle, etc.) At the end of the brewing process, there will be hops bags (if you used them), grain and other residue, and usually so…
11 comments
Read more