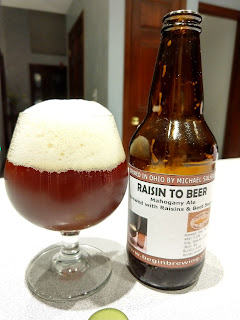 Back in 2010, Raison D'Etre was reportedly Dogfish Head's best-selling (or at least one of its best-selling) beers.  Today, you rarely see it on store shelves. It was one of my favorite beers they made, so I decided to see if I could brew a clone of it.  Fortunately, what is purportedly the real recipe appears in one of Sam Calagione's books.

I was able to find all the ingredients, except for Vanguard hops.  I substituted Czech Saaz for those, as they're similar.  I also substituted regular raisins for the golden raisins the recipe called for.

BeerSmith estimates the following characteristics for this recipe:

pH throughout this mash stayed in the 5.2 to 5.3 range, representing ideal mash conditions.

At these figures, the beer will wind up considerably more bitter than it should be and quite a bit lower in alcohol content.

I pitched a package of Wyeast Ardennes yeast into the fermenter along with a vial of White Labs Clarity Ferm.  The yeast package was dated May 2017, so I am concerned that it might not contain enough viable yeast to ferment the beer. I will check on it in 24 hours and if I'm seeing no indication of fermentation, pitch another Belgian strain to get it going.

The goal is to ferment at ambient/natural temperature for the first 3-4 days, then add a heat wrap to keep it in the 74-75F range for another week until fermentation finishes.  Yeast was pitched on 12/12/2017.

Once again, I saw extremely low efficiency for this batch.  It's causing me to question my process.  Across about 20 batches, my average efficiency has been 72.6%.  That's not great, but not terrible for a home brewer.  The real problem is that I'd been seeing consistent efficiencies in the 80% or better range earlier in the year. Now, those figures are almost as consistently in the 65% range.

The only significant changes I can think of during this time are that I've begun using a new motorized grain mill.  While I could blame the mill, one batch I made when using it delivered a 54% efficiency, while another delivered 83%.

12/13/2017:  I've seen no activity from the airlock as yet, which could indicate that the package of yeast did not contain enough viable cells to ferment the beer.  I'll check again tomorrow and if necessary pitch something else.  I have a package of Omega Belgian Ale W yeast that I could use.

12/15/2017: Still seeing no signs of life in the airlock, I opened the lid of the fermenter to find a nice high krausen, so I immediately closed it.  Still, with the lower temperatures we're seeing this week in Ohio, I decided to put a heat wrap around the fermenter and set a temperature controller to keep the beer at 70F or higher for the remainder of primary fermentation.

12/17/2017:  Today, after not having seen any visible airlock activity since pitching the yeast, I decided to grab a sample of wort and do a gravity test.  The beer coming out of the airlock was lighter in color than I expected.  The refractometer registered 8.2 Brix. Based on my original hydrometer reading and calibration, BeerSmith estimates the corrected gravity to be 1.004 SG and the ABV to have reached 10.12%.  That is much, much more dry and high in alcohol than I expected, but tasting the sample anecdotally confirmed it. The flavor is dry and slightly astringent, without any hint of sugar to it.  This beer may actually be ready for bottling given how low the gravity has become.

12/24/2017:  The beer has mellowed a bit and seems ready for bottling.  That is something I'll hopefully accomplish this week.

12/27/2017:  The beer was bottled today with enough corn sugar to carbonate it to 2.8 volumes of CO2, which should be about right for an American/Belgian hybrid ale.  The hydrometer measured the gravity as 1.013 SG. The refractometer's uncalibrated reading was 8.2 Brix, which BeerSmith says with calibration should be 1.012 SG.  Given the starting gravity of 1.066 SG and final gravity reading of 1.013 SG, it should be approximately 7.05% ABV.