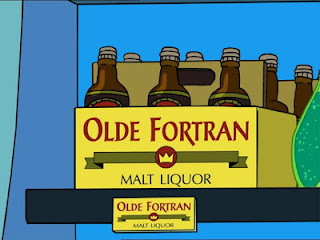 I've been a fan of the now-defunct (again) series Futurama since it first aired. In that series, the alcohol-fueled robot Bender B. Rodriguez was often seen guzzling bottles of a beer named Olde Fortran Malt Liquor.

While there is no way to know what a fictional cartoon beer might taste like, the name of the brew is similar to Olde English, an American Malt Liquor that is produced by the Miller Brewing Company.

The American Homebrewers Association lists a recipe for a hypothetical clone of Olde English.  I decided to brew that with the Zymatic and see how it turned out.  I scaled the recipe down to 1.2 gallons to match one of my small glass fermenters and got to work...

1.5 gallons plus 13 ounces of water were placed in the Zymatic keg, then the grain, hops, and Whirlfloc were loaded into the hop bins. The brewing program was downloaded and started on the device.

According to the Picobrew web site, the beer should have the following characteristics:

In actuality, I ended up with about 1.67 gallons and ended up boiling it down to about 1.2 gallons and a final gravity in the 1.061 range - outside the Zymatic.

The high-efficiency mash program for the Zymatic was modified using the Advanced recipe editor to the following specifications:

During the mash, the Zymatic seemed to run low on water in the keg. As a result, it began sucking in air and foaming up such that I lost quite a bit of wort to foam. I ended up pausing the program and adding more water to the keg to stop the air intake. I also cleaned up as much foam as I could from the lid of the tray and applied some anti-foam.  The rest of the mash finished without incident.

Gravity post-mash registered at approximately 1.037 SG.  Considering I was aiming for 1.055, that seemed pretty low, but adding a lot of water to the keg certainly diluted it. I probably over-did it.

A 105 minute boil began, with the following schedule:
When the beer finished boiling, I took another gravity reading. This time around it was still well below the estimated 1.055 SG I expected, so I transferred it into a kettle and boiled it down. Quantity at that point was about 1.7 gallons (approximately), which was far more than expected.

With about 30-40 minutes of boil time, I reduced the wort quantity down to about 1.2 gallons and the wort gravity increased to 1.061 SG - higher than expected but close enough to suit me.  I chilled the wort with an immersion chiller and transferred it to the fermenter.

A half-packet of Safale K-97 (Kolsch) yeast was added to the beer before sealing up the fermenter.  Although Olde English is reportedly fermented with lager yeast, I didn't want to deal with a lager this close to Christmas.

K-97 will reportedly brew with lower esters than US-05 (which I was out of anyway), less superior alcohols, and less residual sugar.  It's also supposed to flocculate well after fermentation is over.  Hopefully the low level of esters will make a for a beer that's "close enough" to a lager, especially fermenter in the cool basement temperatures.

I had already used the other half of the packet for the Blonde Ale I brewed earlier in the day, so I used the rest with Olde Fortran.  The yeast reportedly works ideally in the temperature range of 59-68F, which is about the ambient temperature in my basement this time of the year.

Although the Zymatic is billed as a "set it and forget it" device, I'm finding that it's important to keep an eye on it during the first 30 minutes or so of the mash process. If you don't do that, it seems prone to generating a lot of foam that will push its way out of the tray (or "step filter") and possibly outside the unit (onto the floor).  After the main mash is well underway, if it's not foaming at that point it is probably going to finish fine. So far, I've had no issues with foam during the boil.

01/02/2018: A look in the fermenter shows that the K-97 yeast made a massive and thick krausen that made a real mess of the sides of the glass fermenter. Fortunately it's a big-mouth fermenter so cleanup won't be an issue.  The krausen appears to mostly be gone now, so I suspect fermentation has ceased. I'm debating transferring to a clean secondary and pitching some gelatin, then refrigerating it.

01/06/2018:  The beer was bottled today. The one-gallon batch actually yielded 11 bottles. The beer is a hazy gold color. Coopers Carbonation Drops were used to prime the beer at bottling.  The bottles were then placed in my "hot box" which will keep them at 80F until I remove them, probably next weekend. A sample left in the bottling bucket was light-tasting and moderately bitter.  Nothing to write home about, being neither particularly good or particularly bad.

02/10/2018: The beer has had a while to condition and clarify, so today is the official taste test. As you can see in the image below, it's a nice gold color with thick white head that lasts about a minute before reincorporating into the beer. It's not crystal clear, but only slightly hazy. The aroma is malty with a touch of corn. The flavor is malty, slightly sweet, with just enough hops bitterness to balance it out. I've never had an Olde English, but given how much this reminds me of a mass-produced American beer, I have to think it's close. Is it what Bender would have guzzled on Futurama?  Maybe, though I'd imagine Bender drinking something with a much higher alcohol content. 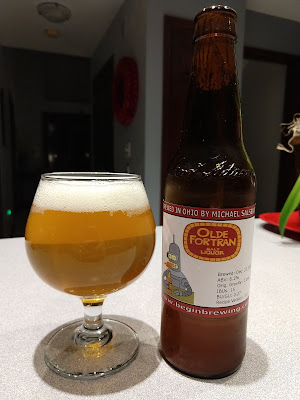