January 01, 2018
The beer that really opened my eyes to the wonder of Belgian ales was Gulden Draak from Van Steenberge in Belgium. This is described by the brewery as a "Dark Tripel" rather than a Quadrupel or Dark Strong Ale.  It's a sweet, but not cloying, reddish dark brown ale with a strong dark fruit presence.  It gets a thick tan head that lasts a while. The aroma is sweet and fruity, with some perfume-like hops.  There are hints of chocolate in the flavor, but mostly dark fruit and caramel malt. The finish is sweet.  It's not a beer you would drink as a session ale, since it's a bit on the sweeter, stronger side.

The official web site describes the beer as having a "complex taste with hints of caramel, roasted malt and coffee in combination with the creamy hazel head."  Wine yeast is used in secondary fermentation. They also list the following details:

In Draft magazine, I found that the IBU rating for Gulden Draak is reported to be 18 IBUs.

I've seen lots of recipes online for clones of it, and have made some of them. None have really come close to the real thing.  I've decided to try my hand at it, after noticing that a recent Belgian Dark Strong Ale I brewed tasted a fair amount like it, just at a weaker level.

The beer I brewed that contained the flavor which reminded me of Gulden Draak (a Trappistes Rochefort 10 clone attempt) contained:

The other beer had hints of a Gulden Draak flavor in the background, with a dark chocolate note up front that I don't get from Gulden Draak. I decided that I would start my clone attempt by using that Trappistes Rochefort 10 clone recipe, dropping the Chocolate malt entirely, increasing the Special B malt, and adding more candi syrup. These changes, I hoped, would mostly eliminate the chocolate flavor and radically dial up the prune/raisin/plum flavors.

Everything but the yeast and candi syrup went into the Zymatic.

The Picobrew crafter says that this should produce a wort which has these characteristics (without the Candi Syrup, which will be added post-boil):
With the candi syrup added, the numbers changed to:
Since this recipe stretched the 9 pound grain limit of the Zymatic, I chose not to add the candi syrup during the brew.  I was also concerned that if the syrup was present from mash through the entire boil step, it might alter or diminish the flavors provided by the syrup.

The brew went more or less perfectly other than the fact that parts of the grain bed seemed merely steamed rather than mashed. I suppose that's what happens when you tax the Zymatic's grain limit.

When I extracted the finished wort to chill it with my immersion chiller, I first stirred in the syrup. Then I used the immersion chiller to finish cooling it off.  After that, the gravity registered 25 Brix or 1.109 SG (after adjustment) instead of the gravity I expected, 1.107 SG.  The color of the beer also got dramatically darker, more of a black than a reddish brown. 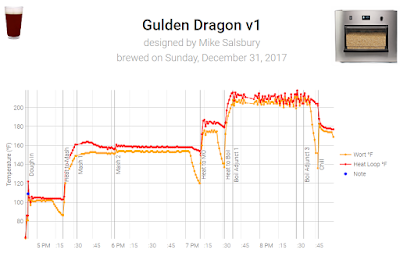 The beer was poured forcefully into an SS Brewing Technologies Brewmaster Bucket to add oxygen. The yeast packet was opened and (given the gravity of the brew) the entire packet sprinkled atop the wort. The fermenter was sealed shut and I began cleaning everything. The fermenter registered a temp of 66F at the start of fermentation.

Given ambient basement temperatures this time of year, cooling should not be necessary (though heating might be). The Tripel I'd made the day before had never gone above 67F during the height of fermentation.

The Zymatic has already allowed me to brew more often than I had been able to at any time during the past.  Since bringing the device online on December 20, 2017, I have made six batches in it.  Of those, two have had foaming issues where some amount of wort was lost.  The rest have gone smoothly and (we'll see in a few weeks) seemingly produced good looking and smelling wort.  The Zymatic is easy to use, easy to clean, and so far "just works" like you hope it would.  It's required a few minimal changes to my brewing process. I have to use their recipe crafter, cleanup is a bit different (but easier), and I have to be sure to load enough water into it. From there, it's mostly set-it-and-forget-it brewing.

I started with the Trappistes Rochefort 10 clone recipe.  That beer had a hint of Gulden Draak flavor to it, but was thinner, drier, and had a strong chocolate note. I removed the chocolate malt from it, tripled the dark candi sugar, and increased the Special B malt. All of these should amp up the dark fruit flavor. I won't know, of course, until the yeast finishes its job.  That may take a few weeks.

01/02/2018:  The beer has been fermenting nicely. It pretty much started several hours after the yeast was pitched. The ambient basement temperature was keeping it on the low side, so I wrapped the fermenter with a heat wrap and some foam insulation to bump up the temperature, which accelerated the fermentation somewhat.  It will probably finish primary fermentation around Monday 1/8.

01/04/2018:  The airlock isn't showing active fermentation at this point, so it must be approaching the end of primary fermentation. A sample pulled from the fermenter had a reddish brown color similar to a real Gulden Draak ale. It's still pretty sweet at this point, which isn't surprising - given both the original beer's sweetness and the fact that the yeast may still have work to do.

01/27/2018:  I bottled the beer today using 3 ounces of corn sugar.  Yield was roughly 27 bottles. It has a good aroma and flavor, even warm and flat, so I'm hopeful it will be a good beer when it's finished carbonating - whether it clones Gulden Draak or not.  I expect to do my first taste test around 02/10/2018. 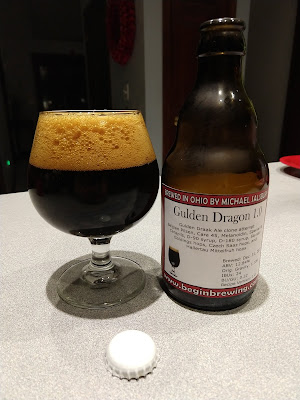 02/08/2018:  The beer is finished now. It pours a very dark brown, almost black, with thick light brown head that lingers a bit.  The aroma is a mix of dark fruit and chocolate.  The flavor starts with a mix of dark malt, prune, and a warming alcohol presence. Finish is malty and slightly bitter.  This is a good example of a Belgian Dark Strong Ale, but not much of a Gulden Draak clone. Time to consider v2.0.