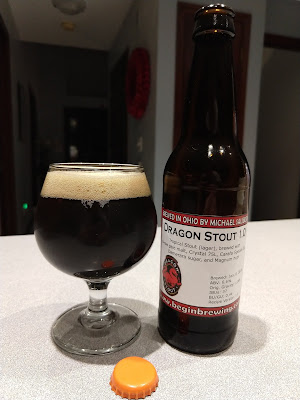 When I visited Jamaica several years ago, a bartender at our resort introduced me to Dragon Stout, their local beer.  I loved it.  I ended up going shopping and buying a lot of the local beers, but nothing appealed to me as much as Dragon Stout and its higher-alcohol cousin, Dragon Stout Spitfire. Truth be told, I liked Spitfire just a little more. I brought some back with me.

Having re-read a BYO Magazine article about Debittered Black Malt (note: a subscription is required to access the article), I was reminded that they had published a recipe for a Dragon Stout Clone there. As documented below, it's slightly modified from their version and is scaled for use in the Picobrew Zymatic.  I also switched out the corn sugar in their recipe for some Turbinado sugar, which I thought might lend a more brown-sugar flavor to it.

According to the Picobrew site, the beer should reach the following characteristics:

The High Efficiency mash schedule was used, with the mash steps modified to 153F for 36 minutes and 158F for 30 minutes. I hoped this would achieve some unfermentable sugars that would give the beer its characteristic sweetness.

The recipe also called for Sinamar to be added at bottling to achieve the desired color. I'll wait and see if I think that's called for.

A 120-minute boil is called for in the recipe, with no hops additions for the first 60 minutes.  To get the bitterness right, I altered that to 50 minutes without hops and 70 minutes with Magnum.

I dissolved the Turbinado in the water when adding it to the keg, to reduce the grain bill in the step filter to 8.25 pounds, which is below the Zymatic's 9-pound limit.  Even at that, there were parts of the grain compartment that did not get wet during the mash.

While the Zymatic worked on the beer, I began getting ready.  This is a huge gain you get from the machine.  It handles most of the brewing tasks, allowing you to spend your time on other things.

Since I still had time, I sanitized a case of bottles and bottled my 1-gallon Blonde Ale batch and 1-gallon Malt Liquor batch, rinsed and dried the bottles, then labeled them before dropping them into my "hot box" for carbonation.  Then I cleaned the bottling bucket, the two fermenters, and other items that needed a cleanup. I also rinsed my immersion chiller so it would be ready when the Dragon Stout finished brewing.

Having done pretty much everything I could, I came upstairs and monitored the Zymatic through the boil and waited for it to finish.

The colder-than-usual Ohio winter has made a corner of my basement a perfect lagering temperature of about 55F. I set the fermenter up there, wrapping it with a fermwrap heater and my Cool Zone cooling jacket.  The cooling jacket was connected to a large reservoir of "basement temperature" water for cooling purposes.  I also inserted my temperature logger to record the temperatures the fermenter reached during fermentation over the next four weeks to see if it stayed in a safe range for the yeast.  It should be finished fermenting around February 3.

01/06/2018: The Zymatic definitely seems to have issues when brewing with large grain bills.  The last 2-3 brews I've made have pushed the 9-pound limitation (with this one weighing in at 8.25 pounds if you don't count the sugar - which was added to the mash water).  The device seems to have trouble flooding the grain compartment enough to wet all the grain. After consulting the Picobrew forums, it's suggested that a grain crush of 0.043 to 0.045 is recommended for the device. My mill was set to 1.063, which is quite a bit larger. What may be happening is that the wort is able to flow too easily through the step filter and isn't spending as much time with the grain as it should. I've adjusted the gap so that the crush will be smaller for the next batch. We'll see if it behaves better.

I've also gone through all the connections and tightened them, done a deep clean cycle on the machine, and even put Teflon tape where the wort lines come into the Zymatic to help seal them a little better.  I tightened the keg posts. In the process, I saw that one of the dip tubes was jammed into the bottom of the keg instead of floating freely near the other. I loosened the post, adjusted the tube, and re-tightened it to see if that will help as well.

A forum post suggested pausing the brew during the mash and stirring the grain bed a bit to ensure that it all gets wet. That wouldn't have helped much (I think) in this brew because there was no water in the grain bed to stir around. Everything pretty much flowed through the grain bed and out.

01/07/2018: I'm not seeing any activity from the airlock yet, so it's difficult to say that fermentation is underway. Then again, I've never brewed with a lager yeast before, so they may behave a bit differently from their ale counterparts. We'll see in a couple of days if the gravity has changed.

01/14/2018:  Despite the Ohio winter being unusually cold, keeping this beer within the yeast's tolerance was a bit tricky.  I found that once fermentation really kicked off, it quickly jumped from 54F to 61.9F.  The cooling system seemed to keep it from going over 62F (the upper limit for the yeast I am using) but only barely.  I added ice a couple of times a day to keep the temperature under control.  I won't know for sure until I look at the temperature logger in a week or two. Today, however, the beer is back down to around 58F.

01/16/2018:  A small sample was extracted from the fermenter for taste testing. The sample seemed more dry than I recall the real Dragon Stout being, and a touch chocolatey. However, it wasn't too bitter. I recall the original having a slight smokiness to it that I don't get from this version. I'm hopeful that it will seem a little sweeter when carbonated and chilled properly. If not, I'll probably need to do another batch with a higher mash temperature, maybe some Munich malt, less Turbinado sugar, and a less attenuative yeast strain.

01/21/2018:  The corner of the basement where the fermenter is sitting has remained in the mid-to-upper 50's consistently for weeks now.  The temperature recorder reads the temperature inside the fermenter at about 57F right now, which is good for the yeast strain.  I may move the beer to a secondary fermenter this week and let it continue lagering.


02/04/2018:  The fermentation has definitely finished and the yeast has dropped out of suspension well.  I bottled the beer today in 27 twelve-ounce bottles using Coopers carbonation drops as priming sugar.  I'm expecting to be able to try the first bottle of the beer some time in the next three weeks. A small sample left in the bottling bucket tasted like I remember the real Dragon Stout tasting. It was a little sweet, not astringent, with no harsh roasted grain notes, but a hint of smokiness.  If it retains these qualities when it's carbonated, I may do a side by side comparison with my remaining bottle of real Jamaican Dragon Stout.  If that comparison is favorable, I'll enter it into competition later in the year. A gravity test using my refractometer yielded a 6.1 Brix gravity for the finished beer. After BeerSmith corrected it based on my refractometer's wort correction factor and the original gravity of the beer (measured with a hydrometer) it came out to 1.000 SG.  Since that's very unlikely, let's just say it fermented very thoroughly.

02/11/2018:  Yesterday, I chilled a bottle of the beer and poured it. It definitely reminded me of the real Dragon Stout we had in Jamaica, though it wasn't quite as sweet and the yeast wasn't as expressive.  I'm guessing a shorter mash at a higher temperature might sweeten it up a little.

04/09/2018:  Three bottles of the beer were left at Barley's Ale House for their annual home brewing competition. I should have the results in a couple of weeks.

If you look at my comments from the taste test on February 11, I mentioned that it wasn't as sweet and the yeast wasn't as expressive.  I would have also added that it missed the dark fruit element as well.  The judges noted that it was overcarbonated, which may be true. I haven't opened a bottle in a while. Judges commented on the yeasty aroma, which I didn't detect in my original tasting.

Ultimately, my take-away from this is that in the next iteration I will need to do the following: