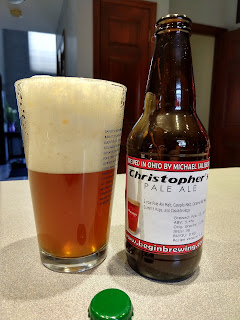 My first attempt to clone this beer was a dismal failure.  For this version, I decided to dig through the clone recipes I could find online. As with many clone recipes you encounter, most of them contained no images of the finished beer, no indication of whether the beer had ever been brewed, and no reviews indicating how it compared to the original.

I finally settled on a recipe on one of the home brew forums which did actually have tasting notes under it, from someone who had reportedly done a side-by-side test against the real beer.  I had all the ingredients on hand and put them to work last night.

PicoBrew's recipe crafter says this will yield a beer with the following qualities:

After brewing, the characteristics were:
I used the High-Efficiency Mash profile with the Zymatic, and a 60-minute boil.

While adding the hops to the hops baskets, I added three pellets of Summit to the two late additions to help increase the Summit flavor contribution and increase the bitterness a little.

After the beer finished brewing, it was chilled rapidly with an immersion chiller and pitched into a sanitized stainless fermenter.  A while later, some yeast left from a previous batch was pitched into the fermenter and it was sealed shut.

03/16/2018:  Apart from slightly undershooting gravity and volume, the brew went as planned. The color seemed like it might be a little dark in the fermenter perhaps due to the 60L, but that can change after yeast activity consumes some of the sugars.  I'll be back in a few days to report anything worth sharing.

03/19/2018:  Tonight I pulled a sample from the fermenter for a gravity test. It registered 6.3 Brix, which is roughly half the original gravity. Since it's likely that this means we're near the end of primary fermentation, I added a generous dry-hopping of Cascade hops to the fermenter. There was still some krausen visible inside, so I think I chose the right time to dry-hop it. The sample tasted much more like a pale ale than v1.0 did.

03/24/2018:  I bottled the beer today, directly from the fermenter. Yield was 23.5 bottles of the 12-ounce size. The rest of the fermenter was a solid cake of yeast and trub. A sample taken before bottling registered 6.3 Brix as it did five days ago. The hop aroma was noticeable, a mix of pine and grapefruit, as we'd expect for Cascade dry hops.  I primed each bottle with a Coopers Carbonation Drop and two small carbonation tablets.  I placed the bottles in a 76F "hot box" to complete carbonation.  It should be ready to taste on Easter day.

03/29/2018:  I decided to chill a bottle and see how it's coming along.  Below are two images. The image with the bottle and the extra-thick head is my brew. The bottom image in the Manny's Pale Ale glass is the real beer. There's perhaps a little more reddish color to the real beer, but they aren't too far off.  Having not had the real beer, all I can really tell you is how this one is.  The color is a hazy reddish amber with thick beige head that lasts a while. The aroma is a mix of grapefruit, orange, and pine.  The flavor starts moderately bitter, with a bit of malt behind it and hints of orange and other citrus. 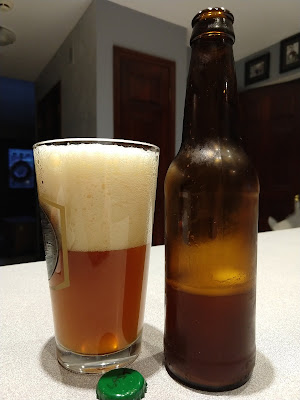 04/03/2018:  The family member who loved Manny's Pale Ale said that he liked this one a lot, but that he felt it was "malty".  I take this to mean that either I need to lower the mash temperature a bit (to reduce sweetness) or reduce the amount of caramel malt used.  He also felt it was overcarbonated, and it probably is.  Next time around, I'll drop the Caramel 60L and reduce the 40L by a couple of ounces. I'll also drop the mash temperature by a degree or two, and perhaps dry-hop with some Summit as well.