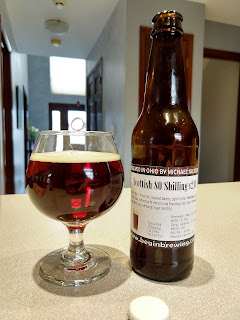 Last year, I brewed my first Scottish 80 Shilling Ale, right before competition time. I thought it was a decent beer, though by far not the best I'd ever had, but it did poorly in competition.

This year, I am hoping to redeem myself with a new recipe.  I'm looking to hit all the BJCP flavor and aroma notes.  It should be a malt-forward beer with minimal esters. Hops should be present enough to balance the malt.  The malt itself can be rich, toasty, and caramelly.  Aroma should have low to medium maltiness, low to medium caramel, and some butterscotch is allowed. The best examples have a light fruitiness. They may have a low hop aroma, with English-style earthy, floral, citrus, and spice to it.  It should be clear, with a low to moderate creamy off-white head. The color should be pale copper to medium dark brown.

According to the PicoBrew Recipe Crafter, the beer should have these characteristics:
After brewing, the actual measurements were:
At the end of brewing, the keg held less than 2 gallons of wort at 17 Brix (which with my refractometer adjusts to about 1.072 SG). I diluted this with distilled water to get down to the intended range, but overdid it slightly. I ended up with an original gravity of 14.2 Brix or 1.059 SG. That's close enough for now.

The Edinburgh yeast likes a fermentation temperature range of 65-70F, so I configured the InkBird controller to hold 65F for three days, then 70F for ten days to ensure it finishes out. Given the large fermenter, cold ambient basement temperature, and small recipe volume, I don't think I will need cooling on this one. If it does get a bit hot, that may contribute some esters that could enhance the beer if not overdone.

I'm concerned that the roasted barley in the recipe could add a roasty note to the beer that takes it outside the style definition, but we'll have to see.  The mix of Crystal/Caramel and Melanoidin malts should deliver some malt complexity.  Hopefully the 10-minute addition of Bramling Cross contributes good flavors and not too much bitterness.  I'm hopeful that the oats will deliver a bit of body and mouth feel, since it always seems like my beers in this gravity range are thinner or better-attenuated than they should be.

During the brew, the Zymatic did generate a fair amount of foam, enough that there was a significant puddle on top of the tray but no significant spillage.

03/27/2018:  It's roughly 24 hours after brewing and I'm seeing no activity in the airlock. Then again, there is a lot of headspace, so there may not be much airlock activity to see.

04/7/2018:  Despite a lack of visible airlock activity, the beer appears to have finished fermentation. I now need to treat it with gelatin and then get it bottled. Final gravity is registering as 7.9 Brix, which BeerSmith is calculating (after adjustment for my refractometer) to be 1.014 SG and an ABV of 5.7%.  In 3-4 days I plan to bottle with carbonation drops.

04/11/2018:  The beer is looking nicely clear, so I decided to bottle it.  I ended up with about 14.5 bottles (12-ounce variety) of this one.  I harvested the yeast for future re-use.  The aroma has a hint of butterscotch to it, and the flavor seems pretty good, too.  There is a nice malty backdrop with just enough hops to balance it, but it's not hop forward. The bottles were placed in a 76F "hot box" to condition.  In about ten days, I hope to try the first sample.


04/14/2018:  Having not paid attention to the bottling date for this beer, I opened a bottle today to check on it.  It wasn't very carbonated yet, which makes sense with only three days in the bottle.  Ignoring the relative lack of carbonation, here's how I'd score it if I were a BJCP judge:
This beer is much better than last year's version, though I do see room for improvement. I'm thinking next time around I will dial back the oats and try using Lallemand ESB yeast, which worked well in an earlier version of my ESB. The yeast gave it the fruity note in the aroma that this beer lacks. I might also try putting a small amount of Bramling Cross at the end of the boil to give it a little of the aroma from that hop variety.

04/21/2018:  Now that the beer has finished carbonation and bottle conditioning, it's gotten much clearer.  It's now a brilliantly clear ruby brown.  Carbonation is still fairly low, which is in line with the style.  Butterscotch and fruit come through in the aroma. The flavor is malty, caramel, lightly toasty, with a touch of butterscotch and dark fruit. Finish is malty and lingering.

04/24/2018:  The more I think about this beer and look at it, the more I think this might be the perfect base for the Belgian Dubbel recipe I've been trying to create.  I'm going to have to try re-brewing it with Belgian yeast and hops, and see what I get.

05/06/2018: A few weeks after bottling, the beer has changed considerably. The buttery or butterscotch note I detected earlier is gone.  The malt comes through much clearer, but is balanced well against the hops bitterness.  It's very easy to drink. I'm not sure I'll change this one.

06//03/2018: The judging results are in from the Ohio State Fair. I am disappointed to say that the judges and I had radically different opinions of this beer. I self-scored the beer a 37. The official score from competition was 25.5.  Below are the individual scores and comments received from the first judge:


The second judge's notes:
So the beer's official score is about 10 points below what I thought of it, so I'm easier on my beer than the judges are, by far.  It's always disappointing to produce a beer you're really pleased with, only to have it roasted by the judges as in this example.

Last year's 80 Shilling attempt scored an average of 27, so this year's version (despite the fact that I felt it was much better) scored a couple of points lower.  Clearly I have more work to do in producing a Scottish ale.

Taking the judges' notes on board, I envision changing the recipe in the following ways for a future re-brewing:
We'll see what happens when I get around to brewing v3.0.