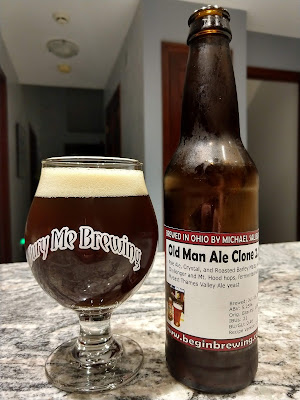 My first attempt to clone Coniston's Old Man Ale was sort of a flop. Instead of producing a reddish brown English style brown ale, it produced a deep black ale reminiscent of an export stout. I don't know if this is because the homebrew shop didn't measure the specialty malts correctly, or because I ordered the amounts incorrectly, or what, but it bore no resemblance to the beer I was trying to brew. On the other hand, it was actually quite a tasty beer and I view it as a happy-but-unrepeatable mistake. I ordered a new set of ingredients this time, and the resulting beer was indeed a reddish-brown color as it came out of the Zymatic. This leads me to believe the original set of ingredients from the homebrew shop contained a bit too much roasted barley.

The Zymatic's high-efficiency mash profile was used, unmodified. A 60-minute boil was used. After the boil, the wort was chilled using an immersion chiller before pouring into the fermenter.

According to PicoBrew's Zymatic Recipe Crafter, the beer should have the following qualities:

07/23/2018: The Zymatic has been very frustrating of late. This batch generated four "Fatal Error 1" messages before the water even made it into the grain compartment of the step filter. Each time, I recirculated the water through the system until it cooled down the heat loop and restarted the brew. Eventually the water reached Dough In temperature (102F) and the brew began. About 20 minutes into the mash, I looked at the step filter and realized the grain compartment wasn't flooded. This meant that full conversion was very unlikely. I could see that wort was not flowing smoothly through the sample port into the keg, which implied a blockage somewhere in the system. I paused the brew, disassembled the keg posts, and found (as I've seen many times) the string in the ball lock post clogged full of debris. Removing the debris and reassembling the post seemed to do the trick. When I resumed the mash, the liquid flooded the grain compartment as expected. From there, the brew finished without another error.

The most likely cause of the issues I saw before the mash is a blockage somewhere inside the Zymatic. After the brew, I ran their new Beta-test cleaning program on the machine. When the cleaning program finished and the machine was flushed with clean water, I began a "super deep clean" process. In this process, a Finish dishwasher tablet is dissolved in a gallon of hot water and poured into the keg. A "recirculate" cycle is started and allowed to run for a while to ensure that the lines inside the machine are all filled with hot cleaning solution. Then the recirculation is interrupted and the machine turned off. The cleaning solution is left in the machine overnight to soak and (hopefully) remove whatever is clogging up the works. Tomorrow night I'll run several rinse cycles through the machine to wash out the cleaning solution and hopefully the next brew will go more smoothly. If not, it will be time to reach out to the PicoBrew folks for help again.

The beer turned out two SG points lower than expected, possibly due to the issues with the first mash step, where not all of the grain was submerged. This was close enough that I didn't supplement with malt extract or anything else.

Wort left the chilling process at 75F. The Burton Ale yeast's optimal fermentation range is between 68F and 73F, so I strapped ice packs to the outside of the fermenter to chill it a bit. Within a few hours, the wort temperature had dropped to 71F.  By morning, it had dropped to 67F, the ambient basement temperature.

07/23/2018: Although the yeast packet pitched into the wort had an "use by" date at least six weeks into the future, by 7:30pm (19 hours after pitching) there was still no sign of fermentation. The Tilt Hydrometer still registered a gravity of 1.047 SG and 67F for the temperature. I took out a Wyeast 1275 Thames Valley Ale yeast pack and smacked the nutrient pack. At 10:30pm, I added it to the wort.

07/25/2018: The Thames Valley yeast kicked off and did the job. About 9 hours after I added it, the gravity began dropping. About 22 hours in, the temperature had increased to 70F and the gravity had dropped to 1.036 SG. I used a bungee cord to attach an ice pack to the fermenter. About 2 hours after that, the temperature had dropped to 62F. About 24 hours after that, the gravity dropped down to 1.016 SG, while the temperature had gone back up to 71F. A new ice pack was applied and as of this moment the beer is down to 1.013 SG and 67F. This works out to 73.77% apparent attenuation and 4.55% ABV. That's a bit more attenuation than I expected from the original yeast, but Thames Valley might go as high as 76% before it's finished.

07/29/2018:  I bottled the beer today using three small carbonation tablets per bottle (low carbonation). It has a good brown ale flavor to it, but seems to lack the tartness I detect in the real Old Man Ale. We'll see how it turns out when it's carbonated. I set the "hot box" to 71F.

08/03/2018: I opened a bottle today for the photo and initial tasting. It poured considerably darker than I expected or intended. It's almost totally opaque, rather than the reddish brown I was looking for. That said, the aroma is a nice mix of caramel and chocolate. The flavor starts lightly sweet and caramelly, then the roasted barley note swells up. This roasty note isn't right for the style, according to BJCP guidelines, so I'll need to do something about that in the next version (and lighten the color). While it's not the beer I want it to be, it's actually a very tasty beer - more reminiscent of an export stout than a brown ale. Head retention is quite good, and the head is almost milkshake-like.