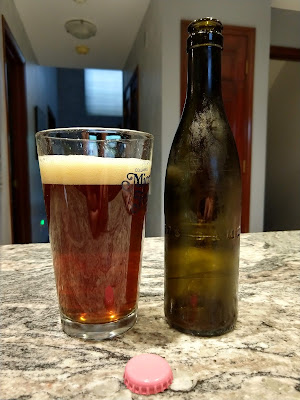 Although I liked my first two Scottish 80 Shilling Ales, judges in the competitions I entered them into decidedly did not. The second actually scored worse on average than the first, despite the fact that it incorporated feedback from the judges of the first recipe. This time around, I decided to build my own recipe after having a look at the BJCP criteria for the style and the ingredients it recommends.

The Zymatic Recipe Crafter provides the following estimated characteristics for the finished beer:

The plan is to leverage my new BrewJacket fermentation temperature control setup for this batch, keeping the wort temperature at 68F (in the middle of the Edinburgh yeast's 65-70F optimum range) for the first 7-10 days of fermentation. If the final gravity has not been reached by that time, increase to 70F and hold there until final gravity is reached - or until the gravity has held constant for at least 3 days.

After that, I'll bottle with carbonation drops and condition for 7-10 days at ambient basement temperature (68F this time of year) until carbonated.

07/29/2018: Despite my best efforts to get the recent Zymatic errors sorted out, the system has continued to have trouble. Generally speaking, any time the Zymatic has to heat wort by more than a few degrees, it seems to generate the dreaded "Fatal Error #1" which implies that the temperature of the heat loop is 50F higher than the temperature of the wort itself. This is generally thought to imply that there is a clog somewhere in the lines that prevents the wort from flowing smoothly past the heat loop, thus causing the heat loop to be much hotter than the wort. Rather than burn up the components inside the Zymatic, the computer throws the Fatal Error code and stops the brew immediately. Unfortunately, I could not find a problem. The keg posts were clear of debris and clean. The in-line filter was also clean. Water seemed to be flowing through the system well when I set it to recirculate. After a few attempts, I got it to Dough In. Then it generated the Fatal Error again. After a few more attempts, I got it through the mash and boil process. According to the information kept by the PicoBrew site itself, it took seven tries to get the beer brewed this time around.

Original gravity came in two points below the expected gravity, which is pretty close... close enough that I didn't try to adjust it. Volume came in low, as it usually does, somewhere around 2.25 gallons rather than 2.5 gallons. After chilling with the immersion chiller for about 8 minutes, the wort was down to 77F. At that point, I transferred it to the sanitized fermenter with the Clarity Ferm and put the BrewJacket to work chilling it down to 68F before I pitched the yeast. (I'll cover the BrewJacket in more detail in a future post, but don't want to talk much about it until I feel like I have a good enough impression of its pros and cons.) By about 11pm, the wort temperature hit 68F and I pitched the yeast.

07/30/2018: Nearly 24 hours later and no change in gravity or temperature. Removing the airlock and peering inside, it was clear that the yeast did not start fermenting. I opened a package of Danstar Windsor Ale Yeast and added it to the wort. At that time, gravity registered 1.058 SG at 68F.

07/31/2018: Fermentation kicked off pretty strongly around midnight after the yeast was pitched. By 8pm, gravity was down to around 1.032 SG.

08/12/2018:  Gravity has been holding at 1.016 SG for some time. I lowered the temperature to 50F and held it there for several days. Today, I bloomed a teaspoon of gelatin and heated it to 155-160F before adding it to the fermenter. I placed the fermenter inside the mini-fridge to allow the gelatin to get the beer nice and clear. I'm expecting to bottle it next week.

09/04/2018: I opened a bottle today to have a taste. The photo at the top of the post is the actual bottle used for these notes. Below are my tasting notes, in roughly BJCP format:


What would I change next time around? Here are my initial thoughts:
I'm hoping some combination of these changes will take the beer over the 40/50 scoring line.