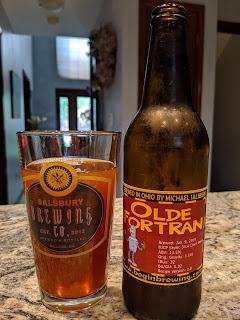 The Matt Groening television series Futurama has long been one of my favorites.  On that show, the robot named Bender was frequently seen chugging bottles of a beer called Olde Fortran Malt Liquor.  There's no way to guess how a fictional beer on an animated television show might taste. We can guess from the label, which is a parody of Olde English Malt Liquor, that it might be something like that. The American Home Brewing Association web site listed a clone recipe for Olde English. I started there.


Since Bender belches fire after drinking Olde Fortran, I figure it has to be a strong beer. Since it's implied in several episodes that Bender has no taste buds (though this is sometimes contradicted), it's probably a cheap lowest-common-denominator kind of mash. I'm going with 6-row malt and a fair amount of flaked corn for the grist.  Since I want it to have at least some flavor, I'm going to add Mandarina Bavaria hops at the 15 and 5 minute marks to impart some mandarin orange notes. I'm going to aim for 14% ABV, which should tax the Oslo yeast pretty well.

BeerSmith 3 estimates the beer will have the following characteristics:

Mash Schedule:
Boil Schedule:
Fermentation Plan:
Following fermentation, the plan is to bottle the beer with one Coopers carbonation drop per bottle and condition one week at 80F to ensure carbonation.

06/09/2019:  The Brewie+ loaded more water than requested. so I had to scoop out the overage to get the mash and sparge water amounts right.  I added pH 5.2 stabilizer, Brewtan B, and as much glucoamylase enzyme as a small pipette could pick up. The enzyme would help to ensure full conversion of the starches in the barley and corn. An iodine test performed well before the mash was over showed full starch conversion.
Post-Brew Notes and Observations


I must have calculated mash and sparge water amounts incorrectly, as the pre-boil volume was an estimated 16.7 liters at a gravity of 1.063 SG (per adjusted refractometer reading).  To raise the gravity to where I expected it to be, I added 3 pounds of Munton's Amber DME.  This brought the gravity back up to where I needed it.

A little over an hour into the boil, the volume registered 14.5 liters and the refractometer showed the gravity at a bit more than 1.100.  I kept the lid off the Brewie to ensure that boil-off was increased to as much as 4 liters per hour, which I hoped would get the beer down to the desired gravity and volume by the end of the boil.

When the boil was over and I pumped the chilled wort into the fermenter, I was disappointed to find that I had well over 3.25 gallons at a gravity of only 1.100 SG instead of the planned 1.130.  I placed 2 liters in the flask with half of the Oslo yeast I'd grown in it, to grow more. Three gallons went into a 3.5 gallon stainless fermenter.  About a quart was dumped down the drain to leave head space in the fermenter.  The beer was oxygenated with pure oxygen for 45 seconds to help the yeast grow. The yeast was pitched, a blow-off tube was attached and the temperature control system configured to raise it from the initial 83F to 85F and hold it there.

About 2 hours after the wort was added to the 2L flask, it had a thick krausen on it and showed lots of CO2 bubbles coming up from the bottom.  The 3-gallon batch was showing signs of fermentation starting as well, with minor gravity changes appearing in the readings.

06/10/2019:  The gravity in the main fermenter has dropped from 1.100 to 1.056 (44% attenuation in under 24 hours).  I've raised the temp a little and swirled the fermenter to keep things moving.  The yeast was clearly happy in its new home.  It blew up out of the fermenter, through the blow-off tube and into the bucket under it. This occurred even with the SS Brew Tech fermenter's generously-sized blow-off tube.

The 2L sample on the stir plate blew off the cover during the night and left a bit of a mess on the surface where it was sitting, but there is plenty of indication of ongoing fermentation still.  I am a little concerned that the slightly ajar lid may have allowed wild yeast or bacteria into the fermenter. I'll have to check this before using it to ferment the next batch.

06/11/2019:  The gravity is down to 1.045 today.  I raised the fermenter temperature to 89F to encourage the yeast to keep going toward the final gravity.  It's definitely slowed down since yesterday but is still going. I'll probably keep raising it a bit each day to keep fermentation moving on.

6/13/2019:  Gravity seemed to have stalled around 1.043, so I added a couple of drops of glucoamylase enzyme to the fermenter. This kicked fermentation off again. This morning it's reading 1.017 SG which means it's about 12.1% ABV.  There are no signs as of yet that the fermentation has ended, either, so it may end up at the theoretical 14.2% ABV target.

06/15/2019:  The gravity has held at 1.009 SG for about 24 hours now, which represents 92% attenuation and 13.3% ABV.  I'm hoping it holds here until I bottle it, as this would leave a decent amount of flavor in the beer while still allowing it to pack the kind of punch Bender would appreciate.

06/21/2019:  The beer was bottled tonight, using one Coopers carbonation drop per bottle for priming. Yield was 23 twelve ounce bottles and 4 sixteen ounce bottles.  The beer is a deep amber color with an aroma reminiscent of orange peel. The flavor is pretty well balanced between malt and hops, perhaps being slightly sweet from the high ABV. There is a mild orange flavor from the Mandarina Bavaria hops and a clear warming note.  If it carbonates, I think it might end up being a very tasty beer.

06/27/2019:  Anxious to see how it turned out, I opened a bottle tonight. Unfortunately, it had very little carbonation.  Still, it has a nice flavor with a definite orange note. There is a clear warming note to it as well, though it is quite drinkable.  I labeled the bottles tonight and put them back in the 83F hot box to help encourage carbonation.

07/06/2019:  After about 15 days in the 85-90F hot box, the beer has not carbonated.  I can't say I am surprised by that, given that the fermentation probably pushed the yeast to its limit and the yeast has a tendency to fall out of suspension very well. There may not be much yeast in the bottle, and what is there might not be healthy enough to carbonate the beer.  I'm going to try two different methods to see if I can get some carbonation... One will be to flip the bottles upside down and hold them for a while, allowing the yeast to fall back through the beer toward the cap, then place them back right-side-up in the hot box. I'll do this nightly for a week with all the bottles.  The other thing I'll do is pick a subset of the bottles (about 6) and inject some rehydrated and active CBC-1 yeast in there, treated with a little fermaid, to see if that gets the carbonation I need.  CBC-1 is intended to handle up to 16% ABV, so it may be hearty enough to carbonate this beer.  We'll see.  If the "flipping over" method gets the carbonation going, I won't bother with CBC-1, but if flipping doesn't work and CBC-1 does, we'll have our answer.

07/18/2019:  It's now had almost a month to carbonate, but it's still flat. Fortunately, those who have tasted the flat version have enjoyed it anyway.