September 22, 2019
Some time ago, I picked up a recipe for a Christmas ale called Bad Santa.  Thinking I had all the ingredients on hand, I decided to brew it, only to find that I did not have at least one of them - Munich Malt.  Since I'd already crushed some of the grains and mostly wanted to brew this to confirm that the Brewie+ is once again functional after recent repairs, I made some substitutions.  Given that I was no longer following the original recipe, I decided to rename it so as not to dishonor the original recipe's creator if this batch doesn't turn out.

The original recipe called for light malt extract, which I replaced here with Pale Ale malt.  It also called for Munich malt, which I discovered I was out of.  I replaced that with the closest thing I had on hand, Vienna (with an ounce of Aromatic malt for fun).  I also did not have the dried cherries I thought I had, so I substituted the 12 ounces of dried cherries with 6 ounces of Tart Cherry Juice Concentrate.  I'm hoping that will provide a good cherry flavor with some tartness to balance the malty sweetness a little.  We'll see in a few weeks...

09/22/2019:  I crushed the grain and loaded it into the machine. I then loaded the hops, Brewtan B, and yeast nutrient into the Brewie+.  I entered recipe details and then weighed out 13880 ml (13.88 liters) of water and loaded it.  I waited for the Brewie to heat that to 104F and pump it into the mash compartment, whereupon it asked for 5 liters to be added for sparging to the boil compartment.  I weighed out the 5 liters.  Replacement of the wires and valve in the Brewie allowed me to complete a full clean and a test recipe yesterday, so I'm optimistic that today's brew will complete successfully also (but there's never a guarantee, is there?). 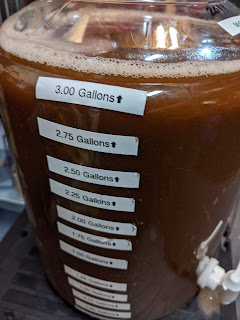 Update 7:30pm:  The brew finished a while ago. I ended up with 3 gallons in the fermenter, which did not surprise me because I'd added a half-liter more water in the sparge step than I planned, because I was concerned about a Brewie message indicating that I needed at least 5 liters of sparge water.  I set up the temperature control apparatus and had it begin cooling the wort down from the original 76F to the intended 70F and attached a blow-off tube since the fermenter was pretty full.  As I write this, the Brewie+ completed a quick clean cycle and is now working on a full clean using some PBW to help more fully clean it out as I don't expect to use it again for a few days.

09/25/2019:  Transferred the beer to a clean and sanitized fermenter.  Prior to transfer, gravity was reading 1.009 SG - which represents attenuation of 82.7% and an ABV of 10.2%.  After the transfer, the Tilt Hydrometer was cleaned and re-sanitized.  Pure vanilla and two Ceylon cinnamon sticks were also added.  At that point, gravity read 1.014 SG, temperature read 69F.  The beer is still cloudy at this point, but there are still signs of slow fermentation.  I may treat it with gelatin later to clear it up.  The aroma was impressive, though.

09/26/2019:  Gravity is now reading at 1.018 SG, which is up from its low point of 1.009 SG. My assumption is that the yeast residue stuck to the Tilt Hydrometer affected its reading.  I can't see the addition of vanilla paste and cinnamon sticks adding 9 points of gravity.  Interestingly, the estimated final gravity was 1.020 SG. If it's reading 1.018 SG now, that's close enough to the estimate to be realistic and probably accurate.

10/04/2019:  A taste of the beer revealed no cinnamon flavor and minimal if any cherry.  I added the rest of my container of tart cherry juice concentrate and two more cinnamon sticks.  If this doesn't help, I may seal some ground cinnamon in a "make your own" tea bag and add that to the fermenter along with more cherry juice.