May 22, 2020
Having just made a Hefeweizen last week, I decided to follow up with a Weizenbock this week.  The BCJP guidelines describe the style as strong, malty, and fruity... something akin to a marriage between the Hefeweizen and the Doppelbock styles.
I did some reading and finally decided to brew a batch based on an AHA recipe by fellow Ohioan Jim Rupert of Germantown.
Ingredients
4 pounds Dark Wheat malt
1 pound plus 11 ounces of Weyermann Pilsner malt
12 ounces Avangard Munich malt
6 ounces of Rice Hulls
3 ounces British Medium Crystal malt (65-75L)
3 ounces Dingeman's Special B malt
3 ounces Pale Chocolate malt
3.50 gallons of mash water, reverse osmosis
1.15 gallons of sparge wate, reverse osmosis
Water treated with 2.3g Gypsum, 2.7g Calcium Chloride, 2.3g Epsom Salt
0.9 ounces Hallertau Mittelfruh hops (60 min.)
1/2 package Wyeast 3068 Hefeweizen yeast
1/2 tsp. Irish Moss
1/8 tsp. Brewtan B in the mash
1/4 tsp. Brewtan B in the boil
1/2 tsp. Yeast Nutrient
According to Brewfather, the beer is expected to have the following characteristics:
The mash schedule for this batch will be:
Boil schedule:
Fermentation plan:
Post-Brew Notes and Observations
05/22/2020:  I began collecting reverse osmosis water in the morning, before we left to complete two errands. I got two gallons during that initial collection.  When we got back, I turned the water flow back on and allowed the RO system to begin filling a 3.5 gallon fermenter while I rested a bit.  I knew I'd need around 4.6 gallons to brew the batch.
With the water collected, I measured out the salts and added those to the water while heating it to 95F and recirculating it using the pump, to ensure that the minerals were well dissolved in the water.  I also worked to measure and crush the grain (along with the other ingredients). I ended up crushing the grain twice, before folding in the 6 ounces of rice hulls for better flow through the grain bed.
As I stirred the grain into the mash water, I realized that I had mis-measured the Pale Chocolate Malt. The recipe originally called for 1.5 ounces, but I'd added 3 ounces by mistake.  It was too late to correct this, so I decided to go with it.
The mash process went as expected, though the pre-boil gravity was considerably lower than I anticipated. I don't know if this was because the mash pH tended toward 4.8-4.9 or what.  I stirred the grain a couple of times during the mash and added calcium carbonate a little at a time until I got the pH to 5.1.  I'd added quite a bit by that point so I decided not to push it and try to go for pH 5.2.
The pre-boil volume was about 4 gallons, which seemed high even for a 90-minute boil.  In fact, that turned out to be the case, as the post-boil volume registered about 2.9 gallons. I fished out the hop strainers and extended the boil by about 30-40 minutes to get the volume down to 2.5 gallons before chilling the wort.  Even with the extended boil, the original gravity did not measure more than 1.061 SG.  That is considerably lower than I intended, which was disappointing.  I don't know if this is was caused by an innate inefficiency in The Grainfather when brewing 2.5 gallon batches, a grain crush problem, a need to mash for longer, the low mash pH, or something else entirely.  Regardless, it's frustrating.
I chilled the wort to 69F and pitched in half the yeast from the packet used for the Hefeweizen from last weekend.  I placed the fermenter in my temperature control rig and set it to ferment at 68F.  The original recipe didn't contain fermentation temperature notes, so I decided to go with something in the middle of the range and see how it went.
I did learn something tonight.  I recently saw a YouTube video where a Grainfather user recommended placing the domed lid used for distilling over the kettle during the boil.  His argument was that this was similar to what pro brewers do in their larger boil kettles, and that it would result in a more vigorous boil from The Grainfather - while still allowing steam, DMS, and other compounds to escape normally.  After placing the lid on my Grainfather and leaving it for a few minutes, I picked it up with a pair of tongs.  I've NEVER seen a boil like that going on inside my Grainfather.  It was a full rolling boil like I've seen on propane-powered kettles, with late-boil foam reaching maybe two-thirds of the way up the sides of the kettle.  It was impressive. If it really does allow the same level of boil-off as an open kettle, this may be a revolution in future Grainfather use for me.
05/24/2020:  The yeast is clearly happy in its new home.  Gravity has already dropped to 1.058 SG while the temperature is holding at 66F thanks to the temperature control system. I'm going to leave it on the low side until the yeast has done at least 50-65% of the fermentation before increasing it.
05/25/2020:  Gravity is down to 1.031 SG today.  I bumped the temperature up to 67F last night, and expect to bump it to 68F today.
05/26/2020:  Gravity is down to 1.017 SG today.  I raised the temperature gradually yesterday to 70F overnight, which is where it's holding now. That's slightly lower than my estimated final gravity of 1.019 but not enough to concern me. 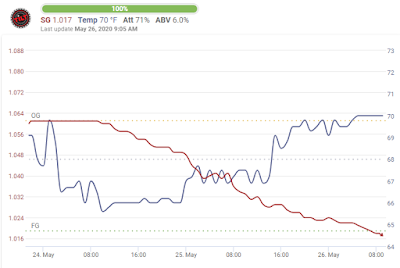