May 25, 2020
I've made several Belgian Dark Strong Ale recipes over the 8 or so years I've been home brewing. That's because the style is by far one of my favorites.  I enjoy its malt-forward, complex, and dark fruit flavors and the warming note from the high alcohol content. However, I've been disappointed with most of my brews to date (despite some competition-winning versions) because the dark fruit flavor just doesn't "pop" to the front of my palate.  This, for me, is one of the most enjoyable flavor elements of both the Dark Strong Ale and the Dubbel.
During a live chat with a far more knowledgeable and experienced brewer, he suggested that I try experimenting with increased amounts of Special B Malt (up to 15% of the grist) and Dark Candi Sugar.  Today, I've decided to brew a fairly traditional Dark Strong style recipe but to include an extremely generous proportion (around 10%) of Special B malt.  I'll also be using D-90 Candi Syrup and Wyeast 1762, which is known for imparting a dark fruit aroma and flavor.  The ultimate goal here is to "dial the the dark fruit flavor to 11" in this batch.  If that proves overwhelming, a future version of this recipe will dial it back.  If it's still too subtle for my palate, the next version will try to max it out even more...
I should note that since the goal of this brew is to max out the dark fruit, I'm paying little to no attention to the BJCP criteria for color.  The BJCP guidelines say that the style maxes out at 22 SRM.  If you've ever looked at a Gulden Draak, St. Bernardus Abt. 12, or Trappistes Rochefort 10, you'll likely agree with me that these true Belgian beers are quite a bit darker than 22 SRM.  This is also not being brewed for competition's sake, so to heck with the guidelines on this batch.
Ingredients
3 pounds Belgian Pale Ale malt
3 pounds Swaen Pilsner malt (couldn't get Belgian locally)
1 pound Special B malt
7 ounces Melanoidin malt
7 ounces Munich malt
6 ounces Crystal/Caramel 40L malt
4 ounces Biscuit malt
2 ounces Aromatic malt
1 ounce Pale Chocolate malt
1 pound Brun Leger candi sugar (5 min)
8 ounces D-90 Candi Syrup (5 min)
1/2 tsp. Yeast Nutrient - Fermaid K (10 min)
0.55 ounces Styrian Goldings hops @ 6.2% AA 90 minutes (20.4 IBUs)
1.00 ounces Czech Saaz hops @ 2.8% AA 15 minutes (7.8 IBUs)
3 packages Wyeast 1762 Belgian Abbey II yeast (which didn't take off)
1 package of Mangrove Jack's M47 Belgian Abbey dry yeast
3.75 gallons mash water
1.00 gallons sparge water
Brewfather characteristics for this batch:
This batch will be brewed in The Grainfather (not to be confused with the Brewfather app used for the recipe calculations above).
Mash schedule:
Boil schedule:
A 90-minute boil will be used to increase malt complexity and flavor.
Fermentation plan:
Post-Brewing Notes and Observations
05/25/2020:  I filtered enough water last weekend through the RO system that I had more than enough ready to do this batch.  I located all my grains, weighed them, crushed them, and added the necessary salts to the water to replicate a Chimay water profile. Once the water got up to temp, I began scooping in the grains and stirring them into the water.  I decided last minute to add four handfuls of rice hulls to the mash to help with drainage, though it may not have been necessary.  This seemed to be a good move, as wort appeared to flow through the grain bed more rapidly than most of the other batches I've brewed this year.
For reasons I won't bore you with, I shut off The Grainfather after the mash and placed a lid over it.  Later in the day, I came back and got it started on the 90-minute boil.  The boil went smoothly, better in fact than some because I placed the distilling lid on the kettle for the first hour of the boil. This generated a far more vigorous boil than I'd ever seen in The Grainfather in the past.  Post-boil, there seemed to be around 2.7 gallons in the kettle. I managed to pump about 2.6 gallons into my fermenter and dumped the rest (which contained a lot of trub) down the sink.
This was an impressive smelling wort. Roasty, malty, dark fruit aromas, maybe a hint of leather, and some caramel.  If most of that comes through in the finished beer, I think it might be a winner.  Gravity came in lower on this batch than I hoped, but close enough.
05/28/2020:  Having pitched two older packages of Wyeast 1762 into the wort, I saw no gravity change and no indication of fermentation, so I ended up pitching a much fresher third pack last night.  As of this writing, gravity is still steady but it's only about 12-13 hours since the pitch of that last packet.
05/29/2020:  I guess fourth time's going to be the charm here?  Three separate packages of Wyeast 1762, one prepared only three months ago, have failed to take hold in the wort.  There's no change in gravity and no indication of yeast activity whatsoever.  I'll be adding a dry package of Mangrove Jack's M47 Belgian Abbey yeast in a little while to hopefully get fermentation going, finally.
05/30/2020:  Gravity is finally dropping.  It's down to 1.092 SG.  Temperature is reading 69F, which suggests yeast growth is occurring, as two other batches that are finished show temps in the 66F range.
Later in the day (around 9pm), gravity has dropped to 1.060 SG, and temp is 71F.  This puts it at about 6% ABV already, with plenty more fermentation to come.
06/01/2020:  Gravity is now reading 1.055 SG and temp is 67F.  Fermentation has slowed from its peak yesterday but is continuing at a steady pace now.  It's worth noting that I'm getting no krausen with this yeast, even at the height of its activity. 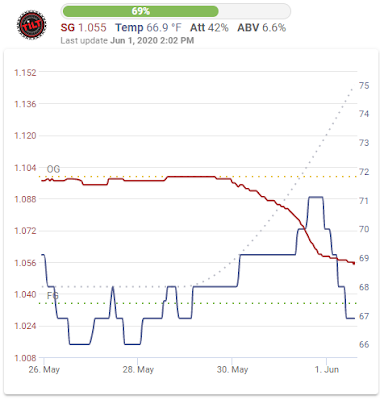 06/02/2020:  Gravity is down to 1.047 SG this morning, with a temperature of 67F.  That places it at around 7.6% ABV, though it's expected to climb as high as 12% by the time it's finished.
06/03/2020:  Last night, I swirled the fermenter, as I have been doing almost daily. This releases some of the CO2 from the beer but also ensures that the yeast stays in suspension.  Gravity has dropped to 1.038 SG today.  Below is the current plot of gravity and temperature from Brewfather: 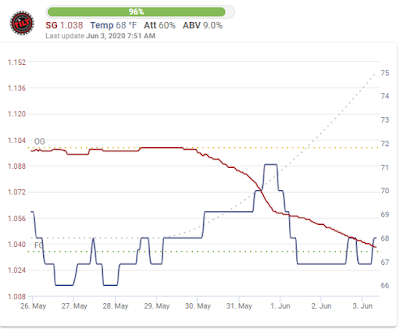 06/04/2020:  Gravity has dropped to 1.029 SG today, with the temp holding at 67-68F.  This works out to the beer being about 10.2% ABV, though it's expected to go as low as 1.017 SG (which would put it closer to 12%).
06/07/2020:  Gravity has been fluctuating between 1.028 and 1.029 SG for the last three days.  I want to give it some more time to make sure the yeast can't attenuate a bit further.  I'm debating doing what the Belgians do, and adding some wine yeast to see if we can attenuate a few more points away, as I would like it to have a final gravity more in the mid-range for the style.
06/24/2020:  The beer was bottled today, using four Brewer's Best carbonation tablets per bottle (medium carbonation).  The final gravity was 1.027 SG, representing 10.5% ABV.  That's higher than I wanted to see, but I like a sweeter Quad or Tripel anyway, so it should be fine for me.  The flavor of the warm, flat beer going into the bottles was very good, so I am looking forward to the finished product in a few weeks.
07/04/2020:  A bottle of the beer chilled in the fridge showed virtually no carbonation.  Will try another in a week or two to see if carbonation has occurred. In the meantime, I'll invert each bottle for a few seconds and then sit it back down, to help get yeast into suspension and ensure carbonation.