The Basics of Yeast Starters

Yeast is the workhorse of the home brewing process.  It is the yeast that will take your sugary wort and turn it into beer.  In many cases, it is the yeast that will also work in the bottle to carbonate your beer.  In many beer styles, like Belgian ales, yeast also contributes flavor to the beer.  Given the importance of yeast in home brewing, making sure that you pitch a sufficient quantity of healthy yeast into your wort is vital to ensuring that your finished beer is going to be good.

When you purchase yeast for home brewing, you'll typically receive either a packet of dry yeast which must be reconstituted with warm water, a tube filled with yeast in a slurry, or a packet that contains yeast and an activation solution in a "break-open" capsule.  If you are brewing a relatively small batch, or a lower-gravity beer, and your package of yeast is within its "best by" date, you may not need a yeast starter at all.

If your yeast isn't relatively fresh, or if you are brewing a high-gravity (high sugar content or high alcohol) beer style, then a yeast starter is usually a good idea.  A yeast starter is basically a very weak wort.  You'll brew up this wort, cool it to yeast-pitching temperature, then toss in your package of yeast.  Inside this "starter wort" your yeast will activate and begin reproducing, increasing the number of cells available.

Depending on the age of your yeast packet and the beer you're brewing, you may need to use more than one yeast starter wort, or you may need to create two or three.  Each time you pitch the yeast into a new starter, the size of the yeast cell population will increase.


How Do I Know If I Need a Yeast Starter?

As mentioned earlier, for lower-gravity beers with a relatively fresh package of yeast, you may not need a starter at all.  A typical package of yeast is meant to be enough to handle a 5-gallon batch of wort with a gravity in the 1.060 range.  If your beer's starting gravity is at or below this, your batch size is at or below 5 gallons, and your yeast is relatively fresh, you probably don't need a starter.

On the other hand, if you're doing a 5-gallon batch of a high-gravity beer like a Belgian Tripel (which may have alcohol content as high as 9% by volume), you probably will need a starter.  There is a fair amount of math involved to figure it out, but I prefer to let computers do my math for me.  They're much faster and better at it.  The free online yeast pitching calculator at Brewer's Friend is what I use. Here's how to use it to determine whether or not you need a starter.  Let's say I'm making a 5-gallon batch of Belgian Tripel with a starting gravity of 1.101 (which is pretty high) and that my yeast was created about a month ago (on January 14, 2015 - about a month before I wrote this post).  Here's what I'd enter: 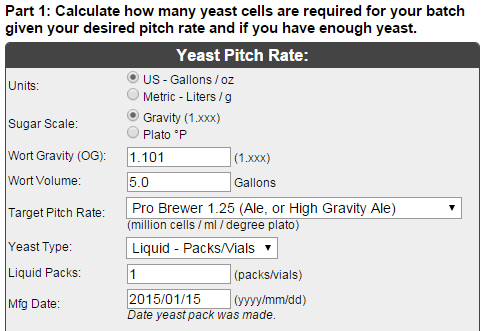 I've entered a starting/original gravity of 1.101 and a batch size of 5 gallons.  I entered in my yeast type (in this case a liquid vial like the ones from White Labs), number of vials, and a January 15, 2015 manufacture date.  Since this is a high-gravity ale and I want the best result possible, I select a Target Pitch Rate of "Pro Brewer 1.25 (Ale, or High Gravity Ale)" which should give me the best chance of fermenting this beer properly.  I then click the "Update" button, which tells me this:

As you can see, my vial of yeast has only 79 billion estimated cells in it.  To pitch yeast at the right quantity for my particular beer batch, the calculator recommends that I have 568 billion cells. That's 489 billion more than I have.


How Much of a Starter Will I Need?

That same Brewer's Friend calculator we've been using here will help us answer this question.  Continuing on with the example above, we see that I'll need 568 billion cells in total.  If I scroll down the calculator page to "Part 2", I'll see this: 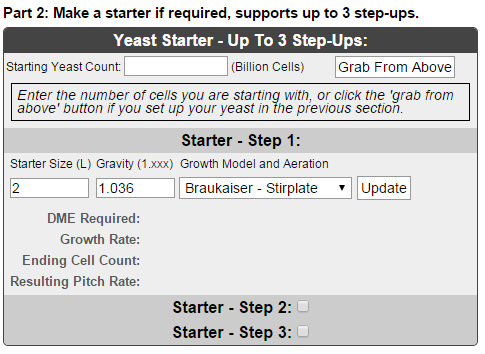 I'll click the "Grab from Above" button so that it pulls down my estimated starting yeast count of 79 billion cells.  I have a 1 liter flask I'm planning to use for this starter, so I change the "2" under the starter size to a "1".  I also have a stirplate and magnetic stirrer, so I'll leave the "growth model and aeration" alone.  Then I click "update" to see what my starter is going to yield. 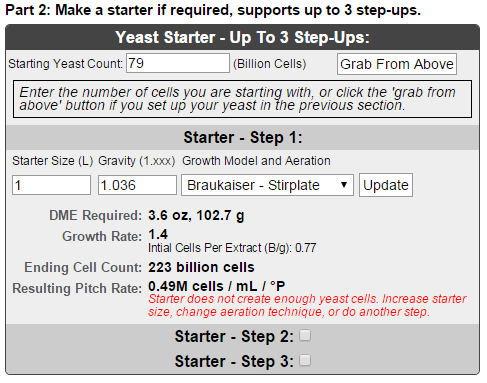 The calculator tells me that my 1 liter starter isn't going to be large enough.  I guess I'll break out my 2 liter growler and recalculate. 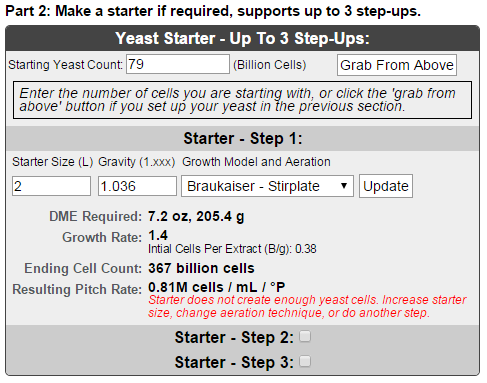 Wow... still not enough.  I guess we'll need to have a second starter!  I check the "Starter - Step 2" box and set it for a 2-liter starter, then click Update. 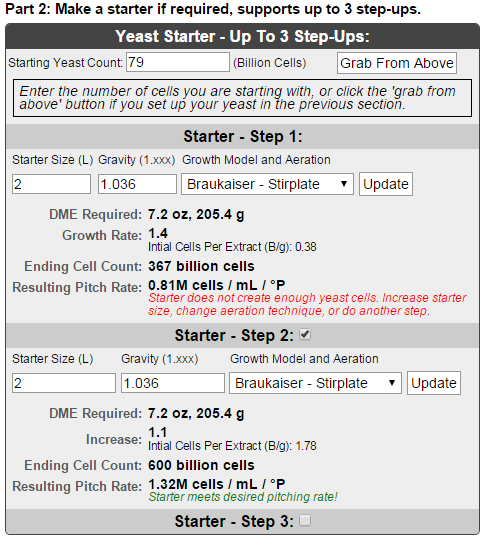 Now we're talking.  After the second starter, we should have a population of about 600 billion cells, which is a bit more than the 568 billion we calculated as necessary for this particular beer.  Time to get to work.


How Do I Make A Yeast Starter?

A yeast starter is nothing more than a weak, low-gravity wort.  You make it the same way you do the wort that you'll eventually pitch the finished yeast culture into.  That is, you'll boil water, add malt extract, and a hops pellet or two.  Then you'll aerate the wort and pitch the yeast into it.  The big difference is that you will, if you have the equipment, drop in a magnetic stirring bar and set the starter on a magnetic stirring plate.  This stirring action will aerate the wort, which will encourage the yeast to grow.

The goal in producing a starter wort is much like the goal of producing any wort.  You want to hit a target gravity of approximately 1.036.  A little higher (say 1.040) should be fine, but go much higher and you risk kicking the yeast into full-on active fermentation.  The problem there is that when the yeast finishes with the starter culture it may go into hibernation - not where you want it when you pitch it into your finished beer.

The recipe for a 1 liter yeast starter is:


Mix these ingredients and boil them for 15-20 minutes to sterilize.  Chill the starter wort to an appropriate temperature for your yeast strain, then pour it into a sanitized container with a sanitized funnel.  Check the gravity of the starter wort before pitching yeast into it, to ensure that it's in the right range.  If it's too high dilute it with some sterilized water.  If it's too low, add a little DME and boil it again to sterilize.

For the 2-liter starter we need in this example, I'll have to double the quantities.

Below are some photos of a recent yeast starter I made.  It's important to note something in these photos.  Normally people don't use an airlock in their flasks when doing yeast starters.  In this particular case, I wanted maximum growth out of my yeast, so I used my oxygenator to infuse the starter with lots of oxygen so that I wouldn't need to leave it open.  As you'll see later on, this seems to have made the yeast very happy, since they ended up blowing wort into the airlock.