March 08, 2015
In December, I made a small (2.5 gallon) batch of beer from a recipe intended to clone the famous Belgian ale, Gulden Draak.  I found the recipe in a book of clone beer recipes and decided to act on it.  Using Beer Tools Pro, I was able to scale the recipe down from the original 5 gallon size to 2.5 gallons.  To make the beer, I needed several ingredients:


These ingredients were purchased at a local homebrew supply shop and measured in my kitchen on a digital kitchen scale.

The brewing process began with my filling a 2-gallon kettle with water and heating it to the appropriate steeping temperature for my specialty grains, then dropping the mesh bag containing those grains into the kettle.


After the grains had steeped long enough, I had to sparge them with hot water to remove the remaining sugars from them.

This left me with a relatively dark but weak wort. 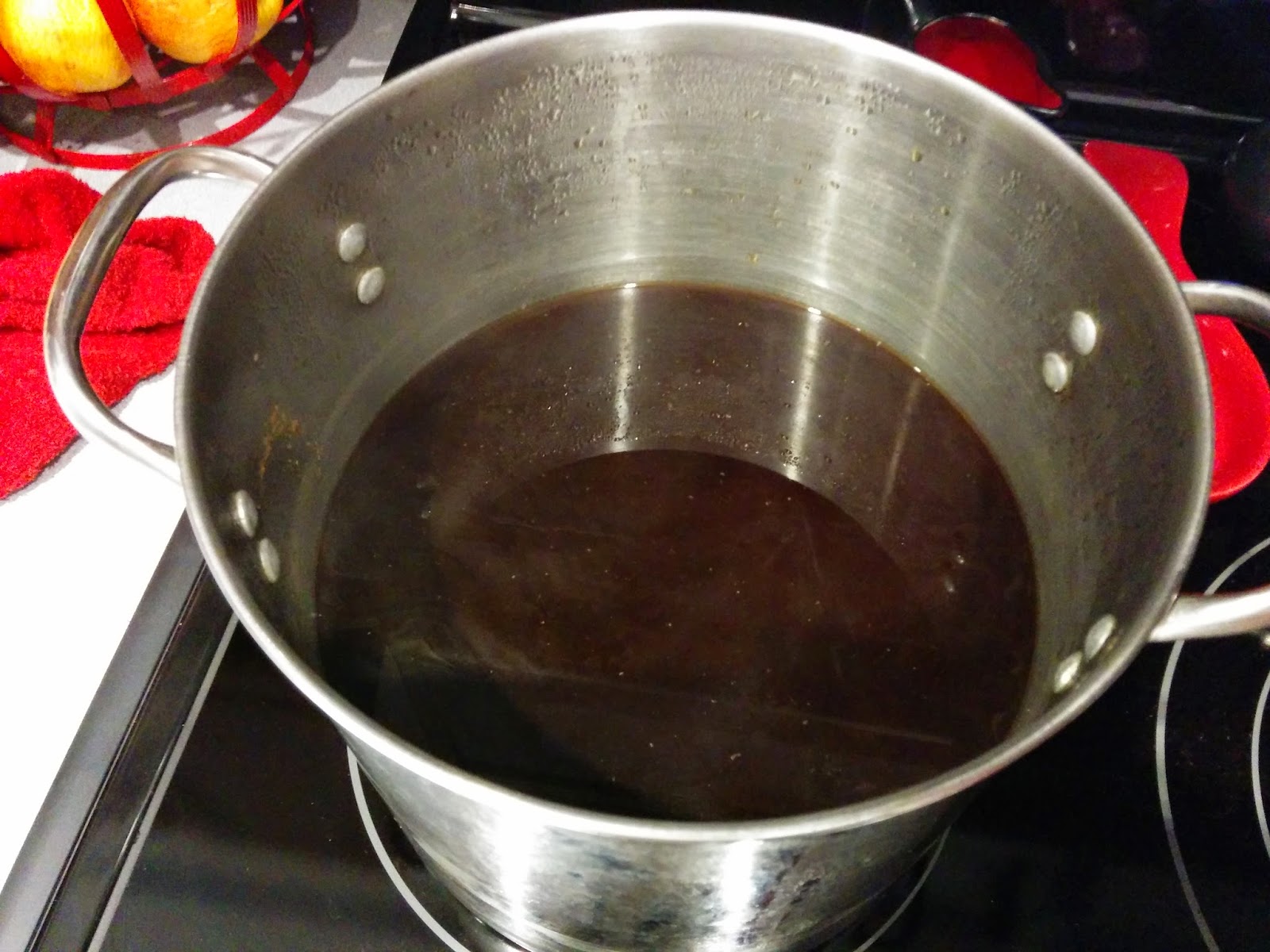 I brought this to a boil and dropped a muslin bag filled with hops pellets into it.  These were the bittering hops that offset the sweetness of the malt.  They are boiled for 60 minutes.


During the last 15 minutes of the boil, I added the second dose of hops. 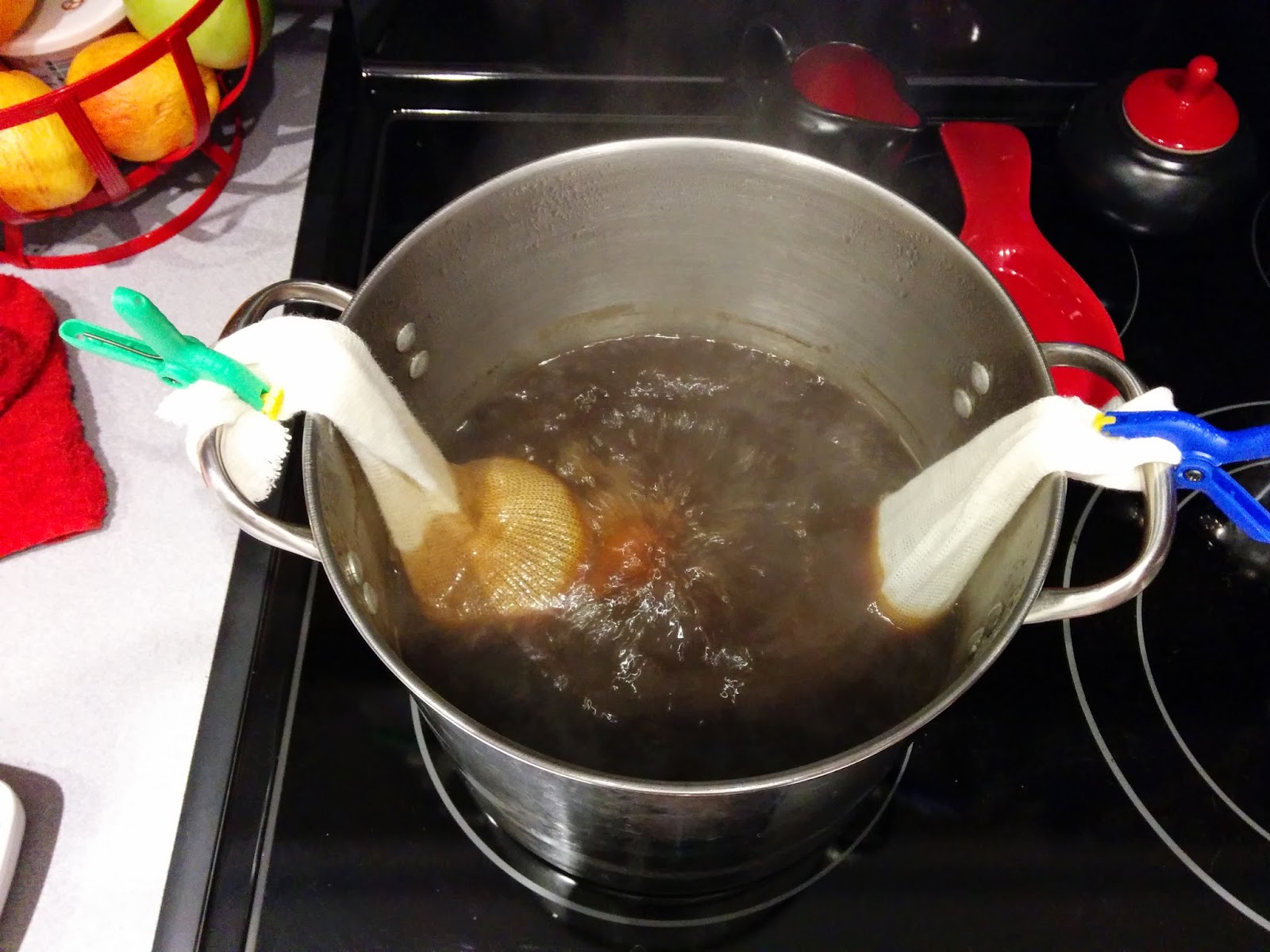 When the boil finished, I used two methods to cool it down to yeast-pitching temperature (as I did not own a wort chiller at the time).  I had previously boiled about 2 gallons of water and placed it in sanitized growlers outdoors in the winter air.  This got the temperature down to near-refrigerator levels.  I placed the kettle full of wort in an ice bath in the sink and cooled it to around 130 degrees Fahrenheit.  Then I placed a half gallon of the chilled water in my fermenter and added this wort to it.  I added more chilled, boiled water until I hit the 2.5 gallon mark in the fermenter.  By that point, the wort was at a pitchable temperature.

When the wort reached room temperature, I pitched a yeast slurry into it and sealed the fermenter.  About three weeks later, my refractometer showed that fermentation had pretty much stopped, so I bottled the beer.  I added a carbonation drop to each bottle to give the yeast the necessary sugar to carbonate the bottled beer.

This particular recipe also needs to sit in the bottle for 2-3 months after it's finished.  It's only been about 40 days since it was bottled.  It needs another 20-50 days to reach its optimum flavor.

Something I learned after doing this particular batch was that if you're going to dilute the wort as I did in this case, you need to increase the amount of hops you use during the boil in order to achieve your target bitterness level.  By introducing the cold water, you are essentially diluting the hops and making a sweeter beer than you intended.  This was borne out by the bottle I've had of the "still green" beer, which was sweeter than I wanted it to be.  This may mellow out some over the next 20-50 days in the bottle, as the yeast consumes more sugar, but probably not.  This explains why some of my smaller batches have been too sweet despite my adding what would have been an appropriate amount of hops for a full-size boil.