August 23, 2015
I recently brewed a Belgian Dubbel and my third or fourth Belgian Tripel, so it seemed worthwhile to brew a Belgian table beer - sometimes referred to here in the States as a Belgian Single.  The Belgian "Single" style is a lighter, more sessionable style than the Tripel or Quadrupel, due to its lower alcohol content.  But like the other more-common Belgian styles, it's got plenty of flavor and complexity.

I found this recipe on the E.C. Kraus brewing supply site and decided to make it.  It was apparently supplied to them by David Ackley, a "beer writer, brewer, and self-described 'craft beer crusader'" who has a certificate in brewing from the Institute of Brewing and Distilling, so it ought to be a good recipe.

I altered the original recipe, which called for Light DME and Wyeast 1762, to this:


According to Beer Tools Pro, my recipe should have come out more or less identical in gravity and bitterness to David Ackley's.  Beer Tools Pro calculated the following qualities:
My version will be a little stronger than Ackley's, perhaps because I'm aiming for a finished volume of 5 gallons rather than 5.5.

My brewing process for this beer was:
The refractometer told me that the wort was at 14 Brix or approximately 1.061 starting gravity.

I checked in on the beer about 3-4 hours after pitching the yeast, and the airlock was already bubbling nicely, so I knew my yeast was alive and working well.  After a week, fermentation had stopped.  I extracted a sample through the spigot and tasted it.  It wasn't bad.  I gave it a second week before bottling.

Why Add Hops BEFORE the Boil?

Those of you who love IPAs and other hop-forward styles are probably looking at the step above where I added my bittering hops BEFORE the boil began and wondering why I would do that.

Most Belgian style beers are not hop-forward ales.  They use hops as a counterbalance to the malt, adjunct, and yeast flavors in the beer.  The idea is to have a nice balance of all the beer flavor elements without having any one of them dominate it.  On each sip, I want to be able to distinguish the flavor contributions of the grain/malt bill, the esters and phenols contributed by the yeast, and the bitterness and flavor imparted by the hops.

I've very recently learned there are two good ways to keep hops from dominating the beer without turning the beer into a cloying, sugary mess.  (I've done that, so I look for ways to avoid it!)  One way to do this, as a local pro brewer taught me, is to age the hops to mellow out their flavor.  Another is to put the initial hops addition into the wort BEFORE the boil.  Many brewers claim that doing this still extracts the maximum bitterness from the hops, but mellows out the intensity of the flavor. That's precisely the effect I wanted - bitterness to balance out the ale, without an intensity that would overwhelm the other flavors.

This is the first time I've done this, so when I come back to this post to add the "post mortem" analysis of the finished beer, I'll tell you if it had the desired effect. 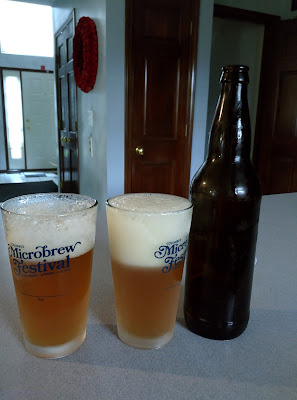 The photo at left is the finished beer, after two weeks of bottle conditioning.  As you can see, it pours a hazy amber color with a nice thick white head that leaves behind spotty lacing.

The aroma is mildly hoppy and malty.

The flavor has a nice mix of malt sweetness, hops bitterness, and a bit of grain to it.  I suspect it will mellow and improve with time as the yeast continues doing its thing in the bottle.

It has a nice mouthfeel.  It's not watery, but not syrupy either.  It's a good balance.

Overall, I'm pleased with the beer.  If someone had handed me this and not told me it was a homebrew, I think I'd have mistaken it for a "professional" craft beer.  That makes it the first beer I've made that I can honestly say that about.

Adding the hops before the boil does seem to have given them less "bite" but no less bitterness.  It seems to have made the bitterness smoother and easier to take.

If I made this beer again, and I probably will, I would probably dial the bittering hops back slightly.  I wouldn't drop the amount much, because it's only slightly more bitter than I'd like it to be.  I'd also consider dialing back the malt bill slightly and upping the sugar content to dry it out a small amount.

Photos of the Brewing Process

Below are some pictures I took during the brewing process.