August 07, 2015
Today I received The Grainfather, a brewing system I backed on Kickstarter some time ago.  Tonight, I'm going to share my initial impressions based on unboxing and assembling the the unit.  When I've had time to clean it and actually use it, I'll share more.

The box took a little minor damage in shipping, but was otherwise intact.  Inside, I found another box.

Inside that, the good stuff was finally revealed...

Underneath the spacer was the Grainfather unit itself, wrapped in lots of plastic.


It was right here that I hit my first point of confusion with the Grainfather assembly process.  In the image above, you see a yellow plastic insert at the bottom of the kettle.  This is wedged into the kettle so firmly that at first I wondered if it was supposed to remain there.  Was this intended to keep the basket from dropping down onto the thermowell or the filter?  Was it there to protect those things during shipping, and needed to come out?  I couldn't tell.  I had to consult pictures on the manual and online to answer that question.  The answer?  Take it out.


I installed the thermowell for the temperature control. 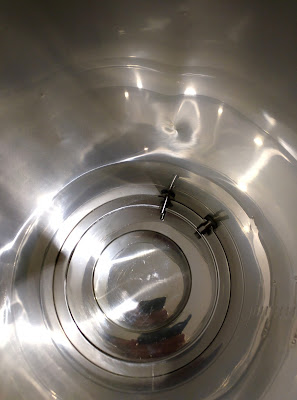 Next, I installed the control box and the temperature probe.  (Note that this is out of sequence with the instruction manual.)

The control box is clipped onto the side of the kettle, with the metal band underneath to support it more.  This metal band also hides the plugs for the pump and heating elements which are connected to the control box using standard plugs.  As you look over the unit, it's clear that the manufacturers have thought about repair and replacement of the various components.  Much of what's here looks to be modular and designed to be removed and replaced if necessary.  That's good.

Next, I installed the discharge pipe (but didn't take pictures of that for some reason).

Then I assembled the pump filter.  This is another tricky bit that the instructions don't explain as well as they could.


The kettle is pretty much configured now.  The next step is to assemble the grain basket that goes inside it.  This is where you'll put grain during brewing.

The grain basket was a little bit of a disappointment to me.  I expected it to be a single bucket-shaped piece.  In fact, it's a tube-shaped piece.  You have a round mesh with a silicone gasket around it that must be pushed down into the tube to form the bottom of the kettle.  This is much harder than it sounds.  The silicone gasket continually slipped off the mesh, even when I nearly had it in place and was just tamping it down.  I hope this doesn't happen during the removal of a large grain load, or it might result in the grain being dumped into the kettle.  That would require some filtering to ensure that it didn't get into the pump and damage it.


Things were finally starting to take shape.  The basket actually looked like a basket now instead of an open-ended tube.  I worry a bit, too, that the overflow pipe and the loose silicone gaskets will conspire to dislodge the bottom in the future.  I hope this worry is unfounded.

When I went to install the "top overflow pipe" I began to think a component was missing from the box.  I could not find a pipe that matched the description or picture of the top overflow pipe in the items I'd removed from the box.  I went through the box a couple of times to be sure, double-checked the instructions, and finally realized that it was already installed over the bottom overflow pipe.  You can actually see it in the above picture. It's what the little metal spring clips are inserted into.

The Grainfather instructions make it clear, as do the instructions with many stainless steel brewing products, that oils used during manufacturing can cause some very unpleasant tastes in the finished beer.  The Grainfather folks recommend using their special "High Performance" cleaner before the first use and after each use.  It would have been nice if they had included a sample of this in the box, at least enough of it to perform the initial cleaning.  They tell you that if you cannot get ahold of their cleaner, that PBW is a great alternative.  Fortunately, I do have that on hand.

I wanted to run a cleaning cycle through the Grainfather at this point, to verify that the pump and control box are working, and to run a quick boil to verify that the heating element and control box do what they're supposed to do.  I decided that doing this in the kitchen might not be the best choice, given that if something went wrong I could be spraying PBW and/or hot water all over the kitchen.  Unfortunately, today's weather in Central Ohio was a bit dicey.  Taking a stainless steel electrical product outside during a potential thunderstorm seemed unnecessarily risky, so I decided to put that off.  Besides, I am on-call for work until Monday morning.  The way my luck works, I'd get called inside to help someone just before a downpour started outside, shorting out the new Grainfather and destroying my investment before I could even use it.

The instructions provided with The Grainfather are a bit inconsistent.  In some areas, like the instructions surrounding the installation and assembly of the discharge pipe, the instructions are quite detailed and include several pictures.  The assembly of the pump filter could have used another photo or two.  Another part that could use some explanation is that the chiller is meant to sit on top of the glass lid.  The lid doesn't show in the pictures in the manual, and only barely shows in my photo above.  Without the lid in place, the chiller is small enough to drop into the grain basket or the boiler, which would make a mess and likely contaminate your beer.  It almost seems like the chiller should mount on the side of the boiler.  It also seems like it could easily slide off the glass lid during use and potentially cause problems (like spraying your nice new wort all over the place).  These are mostly minor nits to pick with the device, though.

It's also worth noting that many of my comments here are based just on observations made during unpacking and assembly.  In real-world use the things I point out might not really matter or happen, or other things I'm not expecting could happen instead.

Overall, it looks and feels well-made and as though it will be easy to service later if that becomes necessary.  It would also seem like the Grainfather folks will be able to upgrade bits of it later if they want to.  For example, if they wanted to switch to a touch-screen controller, you might be able to upgrade this model by just unclipping the old control module and dropping in a new one.

I'm glad I supported the Grainfather Kickstarter campaign, and that I have the device.  I already have at least two recipes I'll use it for once I've cleaned it and checked it out.  It'll probably be at least next weekend before I can put it to work on its first batch.  When that happens, I'll post more photos and observations about The Grainfather and how it works for home brewing.


Other Grainfather posts on this site: